What About the Beasts of Daniel 7? — A Different Perspective 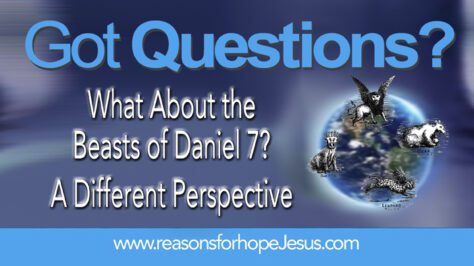 Historically, Bible teachers have taught that the four beasts, recorded in chapter 7, reveal four great kingdoms led by kings. And we know that’s true, because the Bible says so (Dan 7:17, 23). However, Bible teachers have traditionally taught that the first beast represents Babylon; the second, Medo-Persia; the third, Greece; and the fourth, Rome. The problem with this teaching is found in this verse:

Dan 7:17 These great beasts, which are four, are four kings, which shall arise out of the earth.

“In the first year of Belshazzar, king of Babylon”

After Nebuchachadnezzar’s reign, his son Evil-Merodach became king (562-560 BC).  Following him was Neriglissar (560-556 BC), then Labaski-Marduk (556), and Nabonidus (556-539). Nabonidus appointed his son, Belshazzar, as his co-regent in the 3rd year of His reign (553 BC). Daniel was about 67 years old at this time and Nebuchadnezzar had died 9 years earlier.  After the reign of Nebuchadnezzar, Babylon began a steady decline. And the event recorded in Daniel 7, during the first year of the reign of Belshazzar in 553 BC (Dan 7:1), clearly reveals the demise of the kingdom under worthless leadership.

Now back to our verse.

Dan 7:17 These great beasts, which are four, are four kings, which shall arise out of the earth.

In the prophetic vision that Daniel was given, the four great beasts represented kings — that is, kings that were yet to come — those “…which shall arise…”  Babylon was the existing kingdom at this time.  It was not a future kingdom, nor was it a kingdom that would arise. Rather, Babylon was a kingdom in significant decline, and only 14 years later it would fall to the Medo Persians.

So, it should be understood that these four beasts represent the next great world powers to come (“arise”) after Babylon — and that would begin with Medo Persia.  Therefore, these kingdoms do NOT line up with the kingdoms of the “metal man” in Nebuchadnezzar’s dream (Read:  What is the Metal Man Statue of Nebuchadnezzar’s Dream in Daniel 2?)

As opposed to the traditional and popular teaching that the great beasts are 1) Babylon, 2) Medo-Persia, 3) Greece, and 4) the dreadful and terrible beast, Rome, I would suggest that the beasts are only those yet to come, arise, after the first year of the reign of Belshazzar (553 BC).  This means the four beasts would be: 1) Medo-Persia, 2) Greece, 3) Rome, and 4) the dreadful and terrible beast, the revived Roman Empire/the Antichrist’s kingdom.

Review this chart and determine for yourself the correct interpretation of the prophetic vision in Daniel 7. Notice how the beasts (kingdoms) compare to the kingdoms in Nebuchadnezzar’s dream, and are four kingdoms “which shall arise” after Babylon. 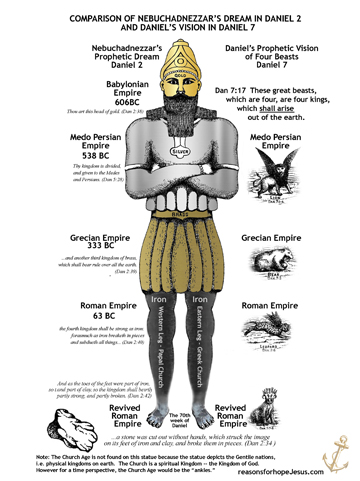