But If Not …the Faith of Shadrach, Meshach, and Abednego (Daniel 3) 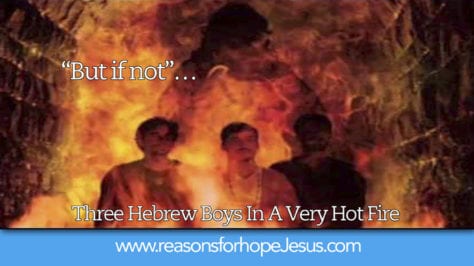 “But if not” (or “Even if not”) are three words that should call to mind the three young Hebrew boys in Daniel 3: Hananiah, Mishael, and Azariah.  Who are these three, you might be wondering?  It’s likely you remember them by their Babylonian names: Shadrach, Meshach, and Abednego. While their story is often told using those names, it’s their Hebrew names we should remember. Hananiah means “Yahweh is gracious,” Mishael means “who is what God is” and Azariah means “whom Yahweh helps.”

Deported to Babylon along with Daniel in 605 BC, King Nebuchadnezzar changed the names of these boys giving each a new name with a new meaning that included the name of a Babylonian god.  Hananiah became Shadrach, which means “may Bel protect his life.” Michael became Meshach, which means “command of Aku.” And Azariah was given the name Abednego which means “servant of Nebo.”  What a travesty against the Lord to remove the names that honored God and give them names that honored false gods.  However, while Nebuchadnezzar could change their names, He could not change their hearts.  Even while bearing the names of Babylonian gods, the boys’ trust in the God of Abraham, Isaac, and Jacob remained steadfast.  This is most clearly seen by the confidence these three demonstrated when facing a fiery test that threatened their lives.

Recorded in chapter two of Daniel is the well-known dream of King Nebuchadnezzar, and in chapter three we read about the king erecting “an image of gold” that was 60 cubits high and 6 cubits wide (Daniel 3:1).  It is thought that this statue was an image of himself because King Nebuchadnezzar demanded that his subjects bow down and worship the statue (Daniel 3:4-5). If they refused, they would face the consequences of a burning fiery furnace (Daniel 3:6).

Remaining true to their God, Shadrach, Meshach, and Abednego refused to bow down before the statue and responded with some of the most inspiring and faithful words in all of Scripture:

Daniel 3:16-18  Shadrach, Meshach, and Abed-Nego answered and said to the king, “O Nebuchadnezzar, we have no need to answer you in this matter.  If that is the case, our God whom we serve is able to deliver us from the burning fiery furnace, and He will deliver us from your hand, O king.  But if not, let it be known to you, O king, that we do not serve your gods, nor will we worship the gold image which you have set up.”

The third proclamation gives three powerful words of strong and prevailing faith that should inspire us. We should ask. do we have the kind of faith these three young Hebrew boys had? When facing trials, tests, and tribulation, do we respond as they did?   Their simple and straightforward response was:

King David spoke similarly when he said, I will bless the LORD at all times… (Psalm 34:1).  To “bless the Lord at all times” means that in all things we trust Him and have confidence in His love and protection.  David’s faith was the same kind of trusting confidence that enabled the three Hebrews boys to boldly stand before the king of Babylon and proclaim their faith.

The Presence of Jesus

We all know the rest of the account.  There was a fourth man in the fire…and it was Jesus!  What a lesson for us.  He’s always with us and He promises to never leave or forsake us (Hebrews 13:5).  The account tells that Shadrach, Meshach, and Abednego were released from the fiery furnace unharmed.

Three Little Words:  “But If Not” in World War II

In late May of 1940, the German forces had closed in on and trapped more than 350,000 Allied soldiers in Dunkirk, France.  Unable to evacuate, they were facing almost certain capture by the German forces.  A British commander cabled these three words back to London, “But if not.”

The three little words are from the 1611 King James translation of the Hebrew Scriptures (they differ, but are similar, in other English translations). In 1940 Europe, the King James Bible was the most widely accepted and read English Bible, and the people of that time were more biblically literate than most people today.  Therefore, it is no surprise that the British leaders and people recognized the words from Daniel 3 and remembered the entire passage in which Shadrach, Meshach, and Abednego proclaimed, my God can…my God will… but if not …”  Just as those young Hebrew boys faced what seemed to be an inescapable fate, so did the Allied forces in Dunkirk in 1940. Just as Shadrach, Meshach, and Abednego proclaimed trust in God to send a miracle, so did the leaders and people of Great Britain proclaim trust that God would send them a miracle. And He did!

A Miracle of Protection

For reasons unknown, and still widely debated, the German forces halted, giving time for Allied forces to evacuate out of France and back to Great Britain. Of course, we know the real reason why the German forces halted their advance.  It was the miracle that the British people had prayed for and expected.  It was the same faith that is recorded in Daniel 3…my God can and my God will.

Do we have that kind of faith in every circumstance?   And do we remember “but if not …” and have the same kind of devotion that surrenders our will to the will of Jesus?

The next time you face a fiery trial, a terrifying test or any kind of tribulation, remember those three little words.  Let them call to mind the blessing of Daniel 3, which is the hope of knowing God’s power (my God can), God’s love and kindness (my God will)…and  God’s sovereignty over all things (but if not …).

With the successful evacuation of troops from France, England’s newly elected (May 10, 1940) Prime Minister Winston Churchill addressed the House of Commons of the Parliament of the United Kingdom on June 4, 1940.  In his speech, he repeatedly proclaimed a “we shall” kind of confidence.

The battle cry of “but if not” is also found in the speech, but Churchill used the words “and if.” He stated that if success did not come they knew God was in control and He would, in His power and might, provide and protect their nation.  It was this kind of faith that fueled the Allied forces to victory over an evil regime. Take a minute and reflect on Churchill’s words.

The “We Shall Fight” Speech

“And we shall never surrender, and if, which I do not for a moment believe, this island or a large part of it were subjugated and starving, then our Empire beyond the seas, armed and guarded by the British Fleet, would carry on the struggle, until, in God’s good time, the new world, with all its power and might, steps forth to the rescue and the liberation of the old.”

Read more about war-torn England: The Gate of the Year: A Message to a Troubled Nation

As I wrote these words and re-read this article, one song rose up in my mind and in my heart.  The words are a reminder of the power we have.  Just as Shadrach, Meshach, and Abednego had Jesus with them in the fire, we have Him with us presently and eternally through the power of His indwelling Spirit.  Listen to the word of this song. They echo the words of the three Hebrew boys and the people of Great Britain.  As you listen, determine to always remember:

My God CAN, my God WILL… but if not …
I will love and honor only Him, knowing He is good and He loves me.

Video by Reasons for Hope* Jesus.
Words and Music by MercyMe.

Read another testimony from the pages of Holy Scripture.  Read Two Women, Two Stories, Two Songs:  The songs and faith of Hannah, mother of Samuel, and Mary, mother of Jesus.