The Judges in the Hall of Faith (Hebrews 11) 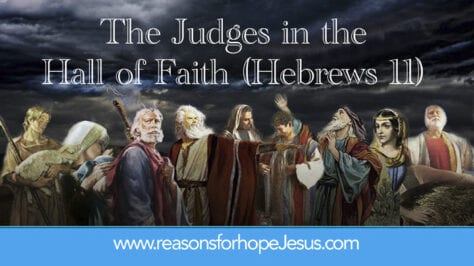 The book of Judges is a very dark time in Israel’s history.  This infamous period is summed up by the words…“in those days there was no king in Israel; everyone did what was right in his own eyes.”  Societies flounder and fail when there is no clear leader, no law enforcement, and people do as they please. But despite the confusion and chaos in Israel, there were a few judges who rose above the decadence to be a deliverer.

Hebrews 11:32… “And what more shall I say?  For the time would fail me to tell of Gideon and Barak and Samson and Jephthah…”

These four judges get an honorable mention in God’s Hall of Faith. Let’s look at them in the order they appear in the book of Judges.

Barak: From Tentative to Triumphant

Judges 4:1-24 tells this man’s story.  Barak was a military man who was serving under the prophetess Deborah, who commanded him to lead the troops against Sisera and the Canaanites who currently had the upper hand over Israel.  Barak initially was very reluctant to go to war against their more powerful enemies and said he would only do so if Deborah went along, which does not speak highly of his bravery.  Deborah agreed, and Barak organized his army and went to war, and God gave them a great victory.  God will use even a weak vessel if he is willing to step out in faith and do the right thing.

Jesus said, “Without Me, you can do nothing” (John 15:5), which leaves no room for self-confidence or self-glory.  On the other hand, the apostle Paul said, “I can do all things through Christ who strengthens me” (Phil. 4:13).  So when faced with a huge challenge that is humanly impossible but is clearly God’s will, we must go forward in obedience with utter dependence upon the power of God.  That’s what Barak did.  Deborah was bold, but Barak was timid. Yet, he stepped out in faith and went to battle for the Lord and His chosen people.  Faith believes that God is real and that God is a rewarder of those who diligently seek and serve Him.  God used Barak even though he was initially reluctant. Then God mercifully included Barak in the Hall of Faith.

Gideon: from Cowardly to Courageous

Initially, Gideon also was not a brave man or natural-born leader (Jud. 6:1-7:25). Every year the Jews would plant their crops but the Midianites would swoop in and steal their harvest leaving them hungry, defeated, and depressed.  They lived in constant fear of the Midianites, and so Gideon hid from them.  But God saw qualities in Gideon that Gideon didn’t know he had.

An angel of the Lord appeared to Gideon and told him that he would lead Israel to victory over Midian. The angel called him a man of valor.  Gideon began to make excuses and complained that God had abandoned them.  But the angel insisted that God would use Gideon to rescue Israel and lead them to victory.  Gideon still had major doubts, so he asked God to show him a miraculous sign that would assure him of divine help and intervention.  God graciously gave Gideon several signs with a consumed meal, a piece of wool, and a foreboding dream to an enemy soldier.  Then God amazingly whittled down Gideon’s army to only 300 men, and still gave them an overwhelming victory that could have only been accomplished by almighty God Himself!

God can and will give victory to a fearful person who is willing to trust Him, be obedient to His word and will, and look to Him to bring forth His desired results.

Jephthah:  from Rejected to Respected

Jephthah (Jud. 11:1-33), like many of God’s heroes, had a very inauspicious beginning.   The Bible tells us that Jephthah was the son of a harlot, which in Israel, sentenced a man to obscurity, infamy, and poverty.  But despite this huge disadvantage, Jephthah (unlike Barak and Gideon) was courageous and had somehow distinguished himself as a man of valor.  Still, he was ostracized, and it seemed he would never be in line for a respected position or promotion.  So Jephthah went to an obscure place where no one would bother or mock him.

Then the Ammonites made war against Israel, and there was no king or general to lead them.  So the men of Israel swallowed their pride, sought out Jephthah, and begged him to be their general and lead them into battle.

Jud. 11:11 “Then Jephthah went with the elders of Gilead and the people made him head and commander over them; and Jephthah spoke all his words before the Lord in Mizpah.”

Though he was a courageous and capable soldier, Jephthah was not arrogant or overconfident with his new and lofty position.  The first thing he did was go to the Lord in prayer to seek God’s wisdom, help, and power.

Jephthah went from being rejected to respected, and he did it by accepting the challenge and going forward by faith.

Samson- a Paradox in Power

Samson (Judges 13-16) was perhaps the most famous, but most foolish, of all Israel’s judges.  Of the four judges mentioned in the Hall of Faith, he certainly had the best start.  His parents were sincere followers of God. They dedicated Samson to the Lord and obeyed God by submitting him to the vow of a Nazarite. While still a young man, the Spirit of God came upon Samson and gave him super-human strength.

Though Samson was physically strong, sadly, he was spiritually weak. Though he was mighty in deed, he was weak in character. He also had a fatal attraction to women, especially pagan women. Yet, despite his flaws and outright sins, God graciously used Samson to win many glorious victories.

Israel’s chief enemy at the time was the Philistines, and Samson defeated them numerous times with astounding feats of strength that baffled and infuriated them.  Sampson single-handedly killed 30 Philistines in Timnah. When they retaliated, he killed hundreds more.  He killed 1,000 with the jawbone of a donkey at Lehi.  But through it all, Samson did very little praying, he dated pagan women, and he did not resist the devil, restrain his flesh, or submit to God.  He relied on his great strength and did not acknowledge the God who gave it to him.

Samson met Delilah in the Valley of Sorek.  He loved her, but her love was not mutual.  She was paid by the Philistines to get Samson to reveal to her the secret of his great strength.  After several failed attempts, Samson foolishly shared the truth about his hair and the Nazarite vow and then fell asleep on her lap.  While he slept, Delilah called for a man to come and cut Samson’s hair cut and she signaled the soldiers to come.  The Philistines attacked Samson and, with his strength gone and the Spirit of God having departed from him, Samson was powerless to resist.  They put out his eyes, and bound and imprisoned him. (Jud 16:21)

But scripture tells, “…the hair of his head began to grow again after it had been shaven” (Jud.16:22).  God was not done with Samson. There was one more victory to be won.

Restored for God’s Use

The Philistines scheduled a  victory celebration and thousands gathered in the temple of Dagon, their god.  Then they called for Sampson to come and put on a show for them.  Though blind and in chains, Samson was led to the temple entrance.  This time, Samson prayed earnestly to the true and living God of Israel.

Judges 16:28-30  “Then Samson called to the Lord saying, ‘O Lord God, remember me I pray! Strengthen me I pray, just this once, O God, that I may with one blow take vengeance on the Philistines for my two eyes.’  And Samson took hold of the two middle pillars which supported the temple, and he braced himself against them, one on his right and the other on his left. Then Samson said, ‘Let me die with the Philistines!’. And he pushed with all his might, and the temple fell on the lords and all the people who were in it.  So the dead that he killed at his death were more than he had killed in his life.”

Wow!  Samson lifted up a prayer, pushed out the pillars, and brought down the house!  What a dramatic ending to a life of both tragedy and triumph.

We should be amazed at the variety of characters God used to accomplish His purposes!  It has been said, “God can draw a straight line with a crooked stick.”  That should give us cause for hope and joy.  The question is, will we surrender to the Lordship of Jesus, step out in faith, and diligently do what He has called us to do?