There are many suggestions about who the author of Hebrews might have been: Paul, Barnabas, Apollos, Silas, Aquila, and Priscilla, or Clement of Rome. Only God knows for certain who wrote this book, but there are many similarities to Paul’s words in his other epistles, and the early church often attributed this book to Paul.

Peter seems to allude to this letter in 2 Peter 3:15, And account that the longsuffering of our Lord is salvation; even as our beloved brother Paul also according to the wisdom given unto him hath written unto you [Jews]…

Peter mentions a letter written by Paul to the Hebrews (“written unto you.” — the “you” are Hebrews/Jews). If our book of Hebrews is not written by Paul, then there is a missing letter written by Paul to the Hebrews.  We know that the 13 Pauline epistles all went to the churches (gentiles) and were signed by Paul.  For that reason, some dispute Paul as being the author of Hebrews.  However, it is quite possible that, since Paul is the Apostle to the Gentiles and he was writing to Jews about Jewish practices, he might not have signed the letter to avoid any confusion in the churches.

Following ascribing a letter to the Jews being written by Paul, Peter comments 2 Peter 3:16,  As also in all his epistles, speaking in them of these things; in which are some things hard to be understood, which they that are unlearned and unstable wrest, as they do also the other scriptures, unto their own destruction.

Peter is commenting on Paul’s letter, and no one disputes that Hebrews has some of the most difficult to understand teachings (e.g. Hebrews 6 and 10).

Those who received and read this book were Jews.  They would have understood Paul’s references to the prophets, angels ministering to Israel, Levitical worship practices, etc.  Most believe the people lived in Palestine or Italy, with Italy being a more favored location because these readers were not poor (the saints in Palestine were, 6:10; 10:34; Rom. 15:26).   “Those from Italy greet you” (13:24) sounds as though Italians outside of Italy are sending greetings back home.

Most who would have read these words were believers (Hebrews 3:1). The letter was a “word of exhortation” (13:22) because some were drifting and were in danger of abandoning their faith in Christ to revert to Judaism.  The book of Hebrews proclaims the superiority of Christ and Christianity over the prophets, the angels, the priesthood, the Law, for Jesus is the mediator of a New Covenant.

The date of this book is disputed, ranging from the 60s to the early 90s. Its use in the book of 1 Clement, which was written in A.D. 95, requires a date no later than the early 90s. However, it should be noted that there are no references to the destruction of the Temple in Jerusalem in AD 70.  Had the Temple already been destroyed it would have support Paul’s claims that, in Christ, the Old Testament sacrificial system was fulfilled.  The writer also made mention of the Old Covenant “becoming obsolete,” “growing old,” and “ready to vanish away.” (Heb 8:13).  Until the Temple was destroyed, the Jews were still performing rituals and sacrifices.

The author reveals his outstanding education and literary and rhetorical skill. His knowledge of Hebrew Scripture is outstanding, with 29 direct quotations from the Old Testament plus 53 clear allusions to various other passages.

D.  Christ Is Superior in His Priestly Ministry, 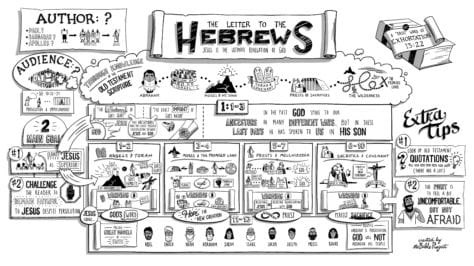