How Can We Save Our Country? 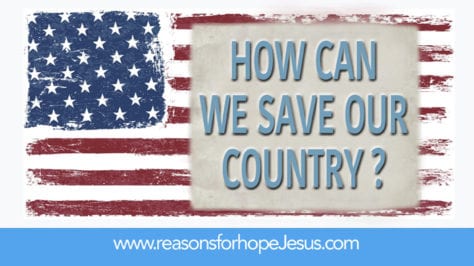 Last week we celebrated the fourth of July, Independence Day, but this year it seemed different.  It seems that we aren’t as free as we have been in the past.

With the Supreme Court ruling on marriage, and with Christian Americans being sued for adhering to biblical beliefs, we have to wonder what the future holds for our country.

Will God bless a nation that makes laws in opposition to His truths? Are our leaders doing what is right in their own eyes? Has America fallen from God’s grace? Has God removed His hand of divine providence?  Is our nation’s demise on the horizon?  Will America become another Babylon, Medo-Persia, Greece or Rome?  Or will God mercifully intervene?

Can Our Country Be Saved?

I think it’s important to remember that America is not redeemable.  It is also not damnable.  A nation does not have a redeemable soul.  The rise or fall of any nation has a direct correlation to the condition of the hearts and souls of the nation’s people.  Thank you Jesus that you came so that man can be redeemed.

As Christians we must consider what recent events reveal about the hearts and minds of our government leaders and the people of our nation.  God’s truths have been overturned and God’s faithful people are being attacked.

Psalm 11:2-3  For look! The wicked bend their bow, They make ready their arrow on the string, That they may shoot secretly at the upright in heart.  If the foundations are destroyed, What can the righteous do?

For more than 200 years, America has been considered a Christian nation, not because the nation is Christian, but because the people of the nation adhered to biblical precepts and principles.   Our founding fathers worshipped the God of the Bible (see Words from the White House about our Christian Nation ).  They established laws that reflected and upheld a Christian worldview. In the first two centuries, even most non-Christian Americans held to Judeo-Christian morals and ethics and lived their lives in accordance with God’s truths.  Over the last 50+ years, we have seen that change with laws passed that deny God’s truth.  It started by removing God from schools and reached an all time high when the Supreme Court redefined the God-given institution of marriage and the White House celebrated the court’s decision.

What Can the Righteous Do?

There’s been so much talk about the Supreme Court decision, but all the talk won’t change anything.  We can lament about the ruling, but what we really need to do is, give it up to God, trust God and get going.

So what can the righteous do?  The righteous (those made righteous by the blood of Christ) must continue to stand firmly on the Word of God and to speak boldly God’s truths.  The only thing the righteous can do is to help the “wicked” (those who do not know God) find saving grace in Jesus Christ.

The greatness of America is simply a reflection of the hearts of its people, and only God can give man a new heart.   We need to take seriously the responsibility that Christ has given us… to be His ambassadors.

Every Christian who is alive today has been put here for a time such as this.  We cannot remain silent.   We must tell people about our God.

Turn the Hearts to God

Only by changing the hearts of the people can we change our country.  We need to actively pursue our mission to turn the hearts of all men and women to God.  That includes our friends, family, neighbors, co-workers and others we meet. We need revival in America.  The only way we will once again experience the greatness of the United States is if the leaders and the people are “one nation under God.”   President Ronald Reagan once said, “If we ever forget that we are One Nation Under God, then we will be a nation gone under.”  Since the time sin entered our world, the only true hope available has been offered by the only true One who can rescue man.

Romans 5:8  God commends his love toward us, in that, while we were yet sinners, Christ died for us.

Tell someone about Jesus today.  Whether it be a Christian or a non-Christian, share the gospel of the saving grace.  There is only one way for the lies of the world to prevail.  It is for the truths of God to be silenced.  Let your light shine in this dark world.

2 Corinthians 4:6  For God, who commanded the light to shine out of darkness, has shined in our hearts, to give the light of the knowledge of the glory of God in the face of Jesus Christ.

1 Peter 2:9  But you [those who belong to Jesus] are a chosen generation, a royal priesthood, a holy nation, His own special people, that you may proclaim the praises of Him who called you out of darkness into His marvelous light.

John 3:16-17 For God so loved the world, that he gave his only begotten Son, that whosoever believes in him should not perish, but have everlasting life.  For God sent not his Son into the world to condemn the world; but that the world through him might be saved.

The Supreme Court ruling was not about love, it was about redefining marriage–and in doing so the court was “playing god.”  It was God who instituted and defined marriage at the very beginning of creation.

Genesis 2:24  Therefore shall a man leave his father and his mother, and shall cleave unto his wife: and they shall be one flesh.

The Supreme Court may have legislated new marriage laws in our land, but they did not institute marriage and they cannot redefine marriage.

Psalm 33:4-5, 11  For the word of the LORD is right, And all His work is done in truth.  He loves righteousness and justice; The earth is full of the goodness of the LORD….The counsel of the LORD stands forever, The plans of His heart to all generations.

“Have you not read that He who made them at the beginning ‘made them male and female,’ and said, ‘For this reason a man shall leave his father and mother and be joined to his wife, and the two shall become one flesh’?”  — Jesus Christ (Matthew 19:4)