Why Were Select People Included in Hebrews 11? 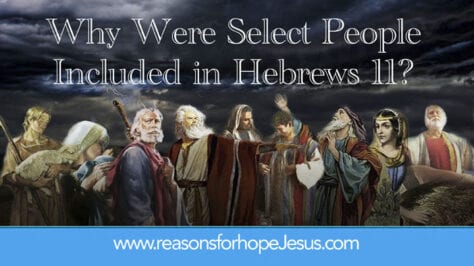 We have looked at those named and unnamed people in Hebrews 11,  God’s Hall of Faith.  In case you missed some, you can catch up now:

While we might wonder why some Old Testaments saints were not included, I believe we can know why those listed in Hebrews 11 are there.  I suggest there are eight reasons and they all have to do with obedience.

Abraham should be admired for this, especially when you consider his background.  He was a Syrian from a pagan family and culture. Then God providentially chose to reveal himself and promised to make a great nation of Abraham and his descendants. (Gen. 12:1-4) He told Abraham to arise, leave his country and kindred, and go to a place that He would eventually show him.  In unquestioning obedience, Abraham did so.

Later, God told Abraham to go to mount Moriah and offer his only son, Isaac, as a sacrifice.  Incredibly, Abraham did so without question. And God spared Isaac and provided an adult male lamb as a substitutionary sacrifice.  It would have been understandable if Abraham had tried to argue or bargain with God, but he didn’t.  He had unquestioning obedience.

Abraham’s obedience was not only unquestioning, it was immediate.  When God spoke telling him what to do, Abraham obeyed without delay.

In Luke 9:57-62, we have the story of people who came to Jesus and proclaimed their willingness to follow Him. But then they made excuses about why they couldn’t do it right away.  One said, “Lord let me first go and bury my father.” Another said, “Let me first go and bid them farewell who are at my house.”  Jesus’ response was, “No one having put his hand to the plow, and looking back is fit for the kingdom of God.”  Jesus desires and deserves our immediate obedience.  It has been said, “delayed obedience is disobedience.”

The word “immediately” is found 55 times in the New Testament.  When Jesus called Peter and Andrew (Mat 4:18-20) and said unto them… “’Follow Me, and I will make you fishers of men.” They immediately left their nets and followed Him.”  James and John responded the same way in vs. 21-22.

Faith that honors God is expressed in unquestioning, immediate obedience.

Heb 11:9  “By faith he (Abraham) dwelt in the land of promise as in a foreign country, dwelling in tents with Isaac and Jacob, the heirs with him of the same promise…”

Trusting and obeying God is almost always inconvenient.  Almost without exception, it requires that we leave our personal comfort zone.   In order to follow God, Abraham had to leave his family, country and pagan religion. He had to place explicit faith in the one true God, and begin living as a nomad, dwelling in tents.  And he had to keep moving toward the promised land, where he would be considered a foreigner for life.

Following God in faithful obedience has never been convenient.  And it’s not convenient to repent of sin, surrender to the Lordship of Jesus, be baptized by immersion, be a faithful church member, be a generous giver, and to love the lost and unlovely. But that is what real faith requires.

Heb 11:10… “he waited for the city which has foundations, whose builder and maker is God.”

By faith Abraham was content to live a nomadic lifestyle and wait for the next life to enjoy a heavenly city and an eternal home that God Himself would prepare for him.

Heb 11:13  “These all died in faith, not having received the promises, but having seen them afar off were assured of them, embraced them and confessed that they were strangers and pilgrims on the earth.”

These words describe the genuine faith defined in Hebrews 11:1, “Faith is the substance of things hoped for, the evidence of things not seen.”  By definition, the faith that honors God is patient,  and willing to wait for God’s promises to be fulfilled.

The apostle Paul wrote that we are to be “looking for that blessed hope and glorious appearing of our great God and Savior, Jesus Christ” (Titus 2:12).   And James wrote that we are to “be patient, establish your hearts, for the coming of the Lord is at hand” (James 5:8).

Heb 11:11… “By faith Sarah herself also received strength to conceive seed, and she bore a child when she was past the age, because she judged Him faithful who had promised.”

Sarah was a barren woman.  God had promised a son to Abraham and Sarah, but decades went by before that promise was fulfilled.  Sarah finally conceived at age 89 and at 90 gave birth to Isaac. As scripture says, she was “past the age.”  But God kept His word.

Remember the law of sowing and reaping?  God wants us to faithfully sow good seeds of obedience. And then He promises that we will reap if we do not faint, or lose heart. (Gal. 6:7-9).

Jesus taught His disciples that He is the True Vine, and His followers are the branches.  Then He taught them that he expected them to bear fruit, and that the key to fruitfulness is to “abide in the Vine.” (John 15:4-5)

We abide in the Vine (Jesus) by continuing in the Word and in prayer. The Bible teaches that as we faithfully sow seeds of obedience, we will reap spiritual fruit.

Those listed in the Hall of Faith were not perfect. But they were saved by grace. And they had genuine enduring, persevering faith.  They served God diligently until their dying days. Then they “died in faith.”

Heb 11:13b… “these all died in faith, not having received the promises, but having seen them afar off…”

Those in God’s Hall of Faith were determined to demonstrate their faith by their obedience whether they received the promises in their lifetime or not!

Abraham never saw the fulfillment of many of  God’s promises (Gen 12:1-4), but he obeyed anyway!  His obedience was unconditional.  He obeyed and walked by faith, not by sight.   The three Hebrew children; Shadrach, Meshach and Abednego refused to bow to the king’s pagan image.  They are

wonderful examples of unconditional obedience!  Faith that honors God includes obeying God without conditions, and regardless of circumstances or outcome.

Heb 11:13c-16… “having seen them [the promises of God] afar off, were assured of them, embraced them, and confessed that they were strangers and pilgrims on the earth… they seek a homeland… now they desire a better, that is, a heavenly country; therefore God is not ashamed to be called their God, for He has prepared a city for them.”

These men and women in God’s Hall of Faith were focused on the eternal rather than the temporal  Instead of expecting God to reward their faith and obedience immediately in this life on earth, they looked forward by faith and obeyed focused on eternal rewards and the heavenly city that God promised.

Those God acknowledged in Hebrews 13 are included because of their obedience!  There is no substitute for obedience.

The Children’s song “O-B-E-D-I-E-N-C-E” by Jeremy Brummel sums it up this way: