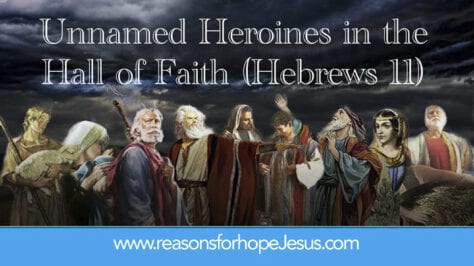 Heb 11:34-36  …escaped the edge of the sword, out of weakness were made strong, waxed valiant in fight, turned to flight the armies of the aliens.   Women received their dead raised to life again: and others were tortured, not accepting deliverance; that they might obtain a better resurrection:  And others had trial of cruel mockings and scourgings, yea, moreover of bonds and imprisonment:

Esther Escaped the Edge of the Sword

Esther was a Jewish girl among the Hebrew captives in Shushan, the capital city of Persia.  She was raised by a relative, Mordecai, and she was gifted by God with great beauty.  King Ahasuerus chose Esther to be his queen, not knowing her ethnic background which Mordecai instructed her to not divulge.

Shortly after becoming queen, Esther discovered that a high-ranking official named Haman had been plotting to destroy all Jews, and had convinced the King to decree that it would happen on a certain day throughout the kingdom.  Mordecai urged Esther to share her identity with the King and plead with him to spare the Jewish people from Haman’s diabolical plan.  However, even the Queen could not approach the King except by invitation or the person would be killed — unless the king would hold out the golden scepter.

Mordecai told Esther that she had to take the risk. If she did not, she and all her people would be killed.  He told her that she had been placed in her position for such a time as this (Est 4:14), implying divine providence.

Esther and her maids fasted and prayed for three days and then Esther bravely approached the king on his throne.  King Ahasuerus did extend the golden scepter to Queen Esther and he listened as she described the plot of wicked Haman.  Then the king hanged Haman on the gallows he had prepared for Mordecai and allowed the Jews to defend themselves, which they did without losing even one casualty.  So by faith, Esther “escaped the edge of the sword,” and is anonymously inscribed in God’s Hall of Faith.

Ruth was Made Strong Out of Weakness

Ruth is one of the most unlikely of all heroines in the Bible because she was a Moabite  The Moabites were descendants of Abraham’s nephew, Lot (Genesis 19:36-38).  The Moabites were the despised enemies of Israel and were excluded from the worship or assembly of the Lord (Deut. 23:3).

During the chaotic times of the Judges, as God was chastening His people with famine, a Jewish couple (Elimelech and Naomi) moved to the country of Moab in disobedience to the Lord’s will.  One of their sons married Ruth. The other married Orpah.  After a few years, Elimelech and both of his sons died.  Naomi and Ruth went to Israel, to the region of Bethlehem, but Orpah did not.  This was during the barley harvest.

Though raised in paganism, Ruth chose to believe in the God of Israel.  As a young widow in Bethlehem, Ruth went out to glean in the barley fields.  The book of Ruth describes the beautiful account of Ruth meeting and marrying Boaz, a kind man who would become her kinsman-redeemer and husband.  (This foreshadowed the loving redemption of Christ for His bride, the Church)

The union of Boaz and Ruth produced a son, Obed, whose son would be Jesse, the father of David. David was the shepherd boy who slew Goliath and became the King of Israel and the most famous ancestor of Jesus Christ, the Messiah, called “the Son of David.”  So by faith, Ruth the Moabitess became the great-grandmother of King David and an ancestor of Jesus!

Deborah lived in the days of the Judges.

Judges 4:4.. “Now Deborah, a prophetess, the wife of Lapidoth, was judging Israel at that time.”

At this time, Israel was cruelly occupied by King Jabin and the Canaanites, under the domination of general Sisera and his army.  Deborah believed God was telling them to rise up in revolt against this enemy.  She challenged a man named Barak to lead an army of Israelites into battle.  Barak responded, “If you will go with me, then I will go; but if you will not go with me, I will not go.” (Judges 4:8).

Deborah responded, “I will surely go with you, nevertheless there will be no glory for you in the journey you are taking, for the Lord will sell Sisera into the hand of a woman.”  Then Deborah arose and went with Barak to Kedesh. (Judges 4:9)

God blessed the courage and obedience of Deborah, and so by faith, she “became valiant in battle,” and an unnamed heroine of God’s Hall of Faith.

Jael Turned to Flight the Armies of the Aliens

Jael was a brave lady we read about in Judges 4. The Lord was giving Israel the upper hand in the skirmish between Deborah and Barak against Sisera and his Canaanite army and so Sisera fled.

Judges 4:17… “Sisera had fled away on foot to the tent of Jael, the wife of Heber, the Kenite…and Jael went out to meet Sisera and said to him, ‘Turn aside, my lord, turn aside to me; do not fear…’”

Jael covered the exhausted general with a blanket, gave him a drink, and led him to believe that she would provide him with safety, shelter, and secret lodging.

Judges 4:21  “Then Jael, Heber’s wife, took a tent peg and took a hammer in her hand, and went softly to him and drove the peg into his temple, and it went down into the ground; for he was fast asleep and weary, so he died.”

This may sound horrible, but Judges 5 tells that Deborah and Barak sang a song of high praise of Jael.

Judges 5:24-27 “Most blessed among women is Jael, the wife Heber the Kenite; blessed is she among women in tents…she stretched her hand to the tent peg, her right hand to the workmen’s hammer; she pounded Sisera, she pierced his head; she split and struck through his temple. At her feet he sank, he fell, he lay still; at her feet he sank, he fell; where he sank, there he fell dead…”

Jael was another unnamed heroine of the faith as she… “turned to flight the armies of the aliens”…Heb. 11:34.

This is likely an anonymous reference to the widow of Zarephath who is mentioned in 1 Kings 17.  After Elijah told wicked King Ahab and Queen Jezebel that it would not rain for 3 ½ years, God told the prophet to go to Zarephath in Sidon and dwell with a widow and her young son there.  Because of the drought and subsequent famine, the widow was about to starve, but God through Elijah worked the miracle of flour and oil that kept replenishing by divine power.

After that, the widow’s son became sick and died.  Devastated, she turned to the man of God.  Elijah carried the boy to his room, laid him on the bed, and cried out to God in prayer.

1 Kings 17: 21-23 “And he stretched himself out on the child three times and said, ‘O Lord my God, I pray, let this child’s soul come back to him.’ Then the Lord heard the voice of Elijah; and the soul of the child came back to him, and he revived.  And Elijah took the child and brought him down from the upper room into the house, and gave him to his mother.  And Elijah said, ‘See, your son lives.’”

The widow of Zarephath was one of the women who received their dead raised to life again. Heb. 11:35)

Unnamed but Well known to God

God is very much aware of everyone who serves Him and everything done in His name, for His glory, for the good of others, and for the gospel’s furtherance.  Even the lowly sparrow does not fall to the ground without His knowledge. And a cup of water given in His name will not lack His reward.

Heb 6:10  “For God is not unjust to forget your work and labor of love which you have shown toward His name, in that you have ministered to the saints, and do minister.”