Abraham in the Hall of Faith (Hebrews 11) 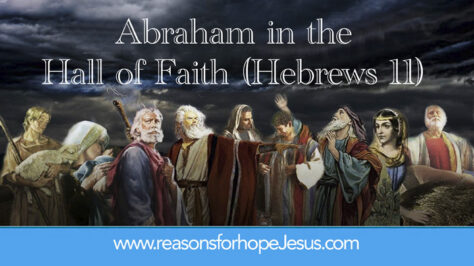 Virtually everyone has heroes, and it’s generally a good thing to have men and women of character that we highly respect.  There are heroes in conceivably every area of life; history, science, education, politics, sports, medicine, business, etc.

God started with Abraham in the founding of the nation of Israel, which led to Judaism, and eventually to the Messiah, Jesus Christ, and the Christian faith.  When the Apostle Paul was writing to the Romans, of Abraham he wrote… “that he might be the father of all those who believe”…“but also to those who are of the faith of Abraham, who is the father of us all” (Rom 4:11,16)

In God’s Hall of Faith, (Hebrews 11), the Holy Spirit gives more space to Abraham than any other person.  One of God’s self-identifying titles is “the God of Abraham, Isaac and Jacob.”  Notably, Abraham is the only person referred to in Scripture specifically as the “friend of God” (Is. 41:8, James 2:23).

Let’s look more closely at Abraham and see what he did to merit his place in God’s list of heroes of the faith.

It is easy to forget what incredible faith Abraham needed in order to be a follower of the one true God. He was a pagan man from a Syrian family of idolaters when the true, Most High God came to him and said,

“Get out of your country, from your family and from your father’s house to a land that I will show you.  I will make of you a great nation; I will bless you and make your name great, and you will be a blessing.  I will bless those who bless you, and I will curse him who curses you; and in you all the families of the earth shall be blessed. So Abraham departed as the Lord had spoken to him”… – Genesis 12:1-4.

Abraham is an example of simple and explicit obedience.  Until God spoke to him, Abraham knew nothing of the one, true God, the sovereign Creator, and the Sustainer of the universe.  Unlike many who have heard the voice of God and have chosen to ignore it, Abraham chose to listen and he responded in true faith. True faith always results in obedience.  James wrote, “Faith without works is dead” (James 2:20).  And John Calvin said, “Faith alone saves, but faith that saves is not alone.”  Genuine faith is always accompanied by works of obedience.

Hebrews 11:8 By faith, Abraham obeyed when he was called to go…and he went out, not knowing where he was going.

Abraham “went out, not knowing  where he was going” (vs 8) and in verse 9, we read  he was “dwelling in tents.”  If you’ve ever stayed in a tent you know that it’s not a suitable, permanent dwelling place.

Though Abraham was a wealthy man and had many servants and much livestock, he was a man on the move. He dwelled in flimsy, temporal quarters while on his way to wherever it was that God would lead him.  Because of Abraham’s implicit faith in the true and living God, he walked and wandered by faith, not by sight.  Abraham didn’t know where he was going, but he did know Who he was following!

This world is not my home, I’m just a-passin’ through;
my treasures are laid up somewhere beyond the blue.
The angels beckon me from heaven’s open door,
and I can’t feel at home in this world anymore.

Hebrews 11:10 for he waited for the city which has foundations, whose builder and maker is God.

Waiting is hard, isn’t it?  I admit to being a generally impatient person.  I don’t like to wait. But Abraham was generally one who was willing to wait on God by faith (though not without some lapses).

The Lord had promised Abraham a son and many descendants.  God said He would make him into a great nation from whom the Messiah would come and through which all nations on the earth would be blessed.  Abraham did finally receive the promised son (Isaac) in his old age, but he never saw the fulfillment of becoming a large and powerful nation or the coming of the Messiah and the possessing of a land of milk and honey where his seed would be numerous like the stars in Heaven or sand on the seashore. But still, Abraham persevered. Plus he was waiting to dwell in a heavenly city built by God Himself.  It has been said, “Faith sees the invisible, endures the intolerable, and achieves the impossible.”

Heb 11:17-18  By faith Abraham, when he was tested, offered up Isaac, and he who had received the promises offered up his only begotten son, of whom it was said, “In Isaac your seed shall be called”

What a test this was!  What an offering of worship this was!  Genesis 22 describes this in its original detail, beginning with God’s command:

Gen 22: 1-2 Now it came to pass after these things that God tested Abraham, and said to him, “Abraham!” And he said, “Here I am.”  Then He said, “Take now your son, your only son Isaac, whom you love, and go to the land of Moriah, and offer him there as a burnt offering on one of the mountains of which I shall tell you.”

Gen 1:3-5 So Abraham rose early in the morning and saddled his donkey, and took two of his young men with him, and Isaac his son; and he split the wood for the burnt offering, and arose and went to the place of which God had told him. Then on the third day Abraham lifted his eyes and saw the place afar off.  And Abraham said to his young men, “Stay here with the donkey; the lad and I will go yonder and worship, and we will come back to you.”

What explicit faith and obedience!  Abraham did not hesitate to commence doing exactly what God told him to do, even though it would presumably mean the death of his son.  This was the son whom the Lord had promised would be the heir of promise through whom God would make a great nation and bring forth the long-awaited Messiah and Savior of the world!  How could Abraham pass this test?  Only by implicit faith…

Heb 11:17, 19  By faith Abraham, when he was tested, offered up Isaac…concluding that God was able to raise him up, even from the dead.

Do you sometimes feel like God expects the impossible from you? Or demands too much from you?  Remember the definition and the description of faith:

Heb 11:1,6 Faith is the substance of things hoped for, the evidence of things not seen… but without faith it is impossible to please Him, for he who comes to God must believe that He is, and that He is a rewarder of those who diligently seek Him.

This describes what Abraham did…he went, he wandered, he waited, and he worshipped by — all by faith.  This is exactly what you and I must do.  We must choose to do what God expects from us because God always does what he has promised to us.

Like Abraham, we must conclude that God is able to do the impossible, which encourages us to see the invisible and endure that which may seem to be intolerable.  Remember, faith honors God and God honors faith.