What is the Meaning of Jesus’ Parable of the Ungrateful Servant? (Matthew 18:23-35) 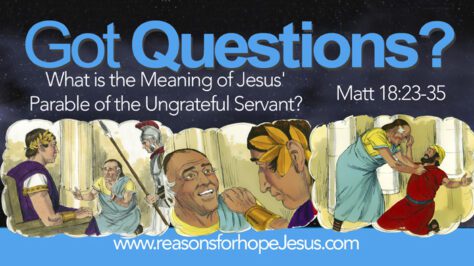 Mat 18:23  Therefore the kingdom of heaven is like a certain king who wanted to settle accounts with his servants.

Context of the Parable

First, let’s begin by noting the context of this parable.  Jesus had just instructed His disciples about righteous judgment and how to handle disputes and sins among the brethren.  He ended by telling them that when two or three are gathered in His name (regarding handling disputes) then He would be with them  (Matt 18:20). This is an often misused verse. Jesus is with us always. Matthew 18:20 is a promise of the Lord’s guidance and authority in disputes.  ( Read: Does There Need to be Two or Three Gathered Together for Jesus to be Present? (Matt 18:20) – A Misunderstood Verse).

Jesus concluded His teaching by saying (Mat 18:22),  “I do not say to you, [forgive] up to seven times, but up to seventy times seven” — a command to generously forgive. (Read: What is Seventy Times Seven Forgiveness?)  Jesus then began to tell a parable about a king and his servents.

The Parable of the Ungrateful Servant

Matt 18:24 And when he [the king] had begun to settle accounts, one was brought to him who owed him ten thousand talents. [25] But as he was not able to pay, his master commanded that he be sold, with his wife and children and all that he had, and that payment be made.  [26] The servant therefore fell down before him, saying,  “Master, have patience with me, and I will pay you all.” [27]  Then the master of that servant was moved with compassion, released him, and forgave him the debt.

Matt 18:28 But that servant went out and found one of his fellow servants who owed him a hundred denarii; and he laid hands on him and took him by the throat, saying, “Pay me what you owe!” [29] So his fellow servant fell down at his feet and begged him, saying, “Have patience with me, and I will pay you all.” [30]  And he would not, but went and threw him into prison till he should pay the debt.

Matt 18:31 So when his fellow servants saw what had been done, they were very grieved, and came and told their master all that had been done. [32] Then his master, after he had called him, said to him, “You wicked servant! I forgave you all that debt because you begged me. [33]  Should you not also have had compassion on your fellow servant, just as I had pity on you?” [34] And his master was angry, and delivered him to the torturers until he should pay all that was due to him.

In this parable, a servant owed a great deal of money to the king.  He came seeking mercy from the king and an extension of his time to repay.  Just as Jesus had instructed His disciples to be generous in compassion and forgiveness (70×7 forgiveness, Matt 18:22), this king had compassion and mercy on his servant and gave him unmerited grace, forgiving his debt.

Note that this parable is not an illustration of salvation. The servant owed a massive debt and was unable to pay it.  This parable is about a massive forgiveness from a compassionate and merciful king. This parable offers no “picture” of a regenerated soul, i.e. a born-again believer.  It was given to teach the disciples how much they should be willing to forgive.

Forgiven but not Forgiving?

This forgiven servant went out into the world. But sadly, he was ungrateful for the great forgiveness he had been given.

Mat 18:28  But the same servant went out, and found one of his fellow-servants, which owed him an hundred pence. And he laid hands on him, and took him by the throat, saying, Pay me that thou owest.

The servant had been forgiven of so much (10,000 talents owed is equal to about $12 million). But sadly, he demanded repayment from his fellow servant of a very small loan (a hundred pence= to about $17.00).

With no mercy or compassion, the ungrateful servant denied his fellow servant’s plea for forgiveness. (Matt 18:29). Then, he cast him into prison until he should pay the debt (Matt 18:30).  When the other servants saw this, they informed their lord (the king of Matt 18:23, 27).

Mat 18:32-33  Then his master [the same king and lord of Matt 18:23, 27], after he had called him, said to him, “You wicked servant! I forgave you all that debt because you begged me. Should you not also have had compassion on your fellow servant, just as I had pity on you?”

The servant had been forgiven so much and yet it had not changed him. In fact, he demonstrated that he had forgotten about the forgiveness he had received.  We are never told of his thanking the king for his  compassion, mercy, and the forgiveness of his debt. Nor do we read of any sense of gratitude demonstrated.

Instead, we read of the servant’s refusal to forgive his fellow servant of a small debt.  This clearly defied Jesus’ teaching to “love thy neighbor” (Mat 5:43) and “whatever you want men to do to you, do also to them” (Mat 7:12).

Mat 18:34 And his master was angry, and delivered him to the torturers until he should pay all that was due to him.

Again, this master is the same person as the king in vs 23 and lord in vs 27.  Now, he is also judge.  However, this is not a judgment unto condemnation, because this is not a “life after death” setting.  This servant was not sent to the place of torments (Hell), but was given over to the “tormentors” with the purpose of him realizing his lack of gratitude for the gift of mercy and compassion he had received and his refusal to extend mercy and compassion to his fellow servant Matt 18:33.

Mat 18:35  “So My heavenly Father also will do to you if each of you, from his heart, does not forgive his brother his trespasses.”

Why would the Father give someone over to the torturers?  Don’t miss the key to understanding this verse:  “from his heart”  Not forgiving a brother of his trespasses reveals a hardened heart.  God calls us to forgive willingly and generously (70 x 7), just as we have been forgiven.  That can only be done when the heart is governed with gratitude and love for our Forgiving King.  Then mercy and compassion will flow forth.

The Father might also choose to give someone over because of His desire to bring about a change in a person’s heart.   All that God does is to work His will and His ways on earth as it is in Heaven.  He is forever drawing people to Himself, desiring that none perish (2 Pet 3:9).

God’s desire, purpose, and plan is to bring about complete restoration of all that was broken in the fall of Adam — and that includes changing the hearts of “wicked (ungrateful) servants” (vs 32).

In the context of what Jesus was teaching (mercy, compassion, forgiveness), we realize this parable is not about salvation.

However, we can find a spiritual lesson about salvation.  Let’s apply this to Church Age believers under the New Covenant, those who have been saved by Jesus’ life, death, burial, and resurrection. In doing so, we can understand the lesson great lesson that a heart filled with gratitude for forgiveness received will produce forgiveness to give to others

Prov 4:23  Keep thy heart with all diligence; for out of it are the issues of life.

Eph 4:32  And be kind one to another, tenderhearted, forgiving one another, even as God for Christ’s sake hath forgiven you.