Where Is Mount Sinai? 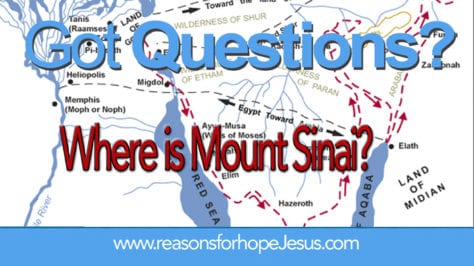 When the Lord led His people out of Egypt, He set them on a journey—a journey that would lead them to a place where He would meet with them — a mountaintop called Sinai.

Before we “look” for Sinai, let’s take a minute to reflect on the exodus of God’s people from Egypt.  God led the Israelites out of Egypt and to the Red Sea.  With the Egyptian army approaching, they were hemmed in with no way to escape.  But God provided a way.  God parted the waters and the nation crossed the Red Sea on dry ground. The waters then drowned the pursuing Egyptian army.

What a miracle that was!  But sadly, only three days after their crossing, they were complaining. They came to Marah — a place of bitter waters — and the people began to murmur against Moses.  Moses, however, did what was right.  He sought the Lord.  And again, the Lord provided.  (Ex 15:25)

The people then journey through a desert on their way to Sinai through a wilderness, desert area. Take note of the name of the area.

Exo 16:1  And they took their journey from Elim, and all the congregation of the children of Israel came unto the wilderness of Sin, which is between Elim and Sinai, on the fifteenth day of the second month after their departing out of the land of Egypt.

Only one month after leaving Egypt, Israel found themselves in the wilderness of Sin, on a journey to an unknown place.  God had provided for them every step of the way.  And then He led them to one of His greatest provisions—the gifts of His Law and instructions for entering into fellowship with Him.  These gifts were given to Moses on Mount Sinai.

Although we know where the Sinai Peninsula is located, we don’t know with any certainty the location of Mount Sinai. For centuries, possible locations have been suggested by scholars, explorers, archeologists, and pilgrims — all using biblical clues, archeology, and geographical information to speculate the location.  However, all we know for certain (from the apostle Paul) is that Mount Sinai is somewhere in Arabia (Gal 4:25).

We must consider the general location of Arabia to be sufficient information, since, if God had wanted us to know the exact location, He would have clearly told us.  Therefore, possible locations suggested over the many centuries are simply reasoned conclusions from clues from the Bible, historical records, and archeology.

Jebel (Mount) Serbal.  A fourth century Christians monastery has been found in this mountain suggesting it might be a possible location of Mount  Sinai.

Jebel Musa.  This is adjacent to Mount Catherine where Saint Catherine’s Monastery was built in the 6th century. This location has historically been widely accepted as the location of Mount Sinai.

2. A Northern Location: Jebel Sin Bisher in the central part of the peninsula on the western side is also suggested as a possible location. This location has been the least embraced by researchers. 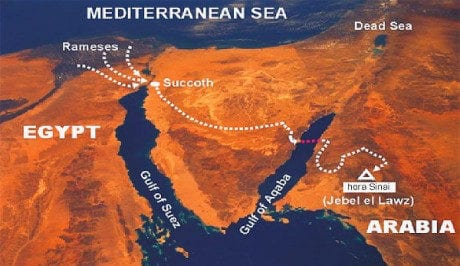 3. An Eastern Location: In recent years, Jebel el-Lawz in Saudi Arabia has been suggested to be the location of Mt. Sinai. Critics claim this location was determined by a team of explorers without professional archaeological or historical training and suggest there are errors in their data and methodology.

While the Southern location of Jebel Musa has historically been the most widely accepted, it should be noted that there is little or no real evidence to support it as being the site of Mount Sinai.  Although Constantine’s mother, Helena, decreed it to be the location in the 4th century, there is no evidence to support her claim.

The Scriptures provide some (albeit very little) information that helps in reasoning the general location for the real Mount Sinai.  In Exodus, Mount Horeb is revealed to be in Midian:

Exo 3:1  Now Moses was tending the flock of Jethro his father-in-law, the priest of Midian. And he led the flock to the back of the desert, and came to Horeb, the mountain of God.

This region of Midian is unquestionably the region of present-day Saudi Arabia. Historical, biblical, and geographical resources support this. Exodus also tells that Midian, east of the Gulf of Aqaba, is where Moses fled after killing an Egyptian:

Exo 2:15  When Pharaoh heard of this matter, he sought to kill Moses. But Moses fled from the face of Pharaoh and dwelt in the land of Midian; and he sat down by a well.

Scriptures also tell of Moses’ return from Midian to Egypt.

Exo 4:19-20  And the LORD said to Moses in Midian, “Go, return to Egypt; for all the men who sought your life are dead.”  Then Moses took his wife and his sons and set them on a donkey, and he returned to the land of Egypt…

Our only clue in the New Testament, as to the location of Mount Sinai, is from the Apostle Paul’s letter to the Galatians:

Gal 4:25  for this Hagar is Mount Sinai in Arabia…

While Paul’s identification of the location of Mount Sinai is just a passing mention, we can trust it is accurate because we know he had extensive knowledge of the history of the nation.

All of these things cast doubt on the Sinai Peninsula as being the correct location of Mount Sinai.  Plus, archaeology has revealed that Pharaoh had many mining interests and military outposts in that area. This suggests that the Sinai Peninsula would not have been a safe refuge.  That might explain why Moses fled further into Arabia. And, it might be a reason for Mt. Sinai being located in Midian.

So, what is the answer to “Where is Mount Sinai?”

The answer remains the same, we do not know. For unless God reveals more conclusive evidence, we can only ponder, reason, and consider the many clues.

I’ll end this with a statement I made early in the article.  If God wanted us to know where Mount Sinai is located, He would have told us.  Perhaps God is protecting us.  Man is so prone to building monuments and creating rules and traditions.  If we knew the exact location, perhaps it would become a place of worship and pilgrimage.  And we are clearly told:

This is another one of the many times when we should simply agree with the prophet Ezekiel and echo his words: