Should we call His name Jesus? Or Yahweh? Or Yeshua? 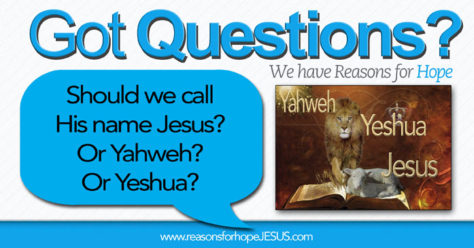 There are many who call Jesus by the Hebrew name Yeshua.  Is that better than using the name Jesus?  What about Yahweh?  We received this question from a reader:

My friend consistently brings up the fact that it makes him angry when people call Yahweh by the name “Jesus.”  He says that the name Jesus was never used in the Old Testament and that man gave Yahweh the name Jesus.  Therefore we are wrong to call the Son of God “Jesus,” because it was NOT what God called him.  My friend said we need to call him Yahweh or Yeshua,  but not Jesus.  I tried to show him where the angels called Him Jesus in the New Testament, but my friend won’t accept this as true because he believes the Bible has been rewritten many times and the original manuscripts did not use the name Jesus.   How would you answer this?

Yahweh is the pronunciation of the covenant name of God, YHVH (Yehovah is another pronunciation, of which Jehovah is the Anglicized form).  God first used this name when He spoke with Abram (Abraham) in Gen 15:7.

“And he said unto him, I am the LORD [YHVH, Yehovah, Yahweh] that brought thee out of Ur of the Chaldees, to give thee this land to inherit it.”

The name, YHVH, was also revealed to Moses on Mt. Sinai when God appeared to Moses in a burning bush.  Moses asked His name and God answered.

Again in Exodus 6, God reminds Moses of this name:

Exo 6:2  And God spake unto Moses, and said unto him, I am the LORD [YHVH, Yehovah, Yahweh]:
Exo 6:3  And I appeared unto Abraham, unto Isaac, and unto Jacob, by the name of God Almighty [El Shaddai], but by my name JEHOVAH [Yehovah] was I not known to them.

So is it more accurate and appropriate to call Jesus by the name Yahweh?

We must remember that the Bible is a book of progressive revelation.  In ancient days, God spoke through His prophets and prophesied of the Messiah to come.  During His earthly ministry, Jesus gave a further revelation of God’s purpose and plan in redeeming man and restoring all things.  And, after Jesus’ ascension to Heaven, God sent the Holy Spirit to inspire the writing of words of God we have in the New Testament, thereby giving further revelation and completing the Holy Scriptures.

With full revelation, we understand the Great I AM who spoke to Moses to be a Triune God — one God in three distinct Persons:  God the Father, God the Son and God the Holy Spirit.  All three Persons are co-eternal, co-equal and co-existent in the one Godhead. Therefore, when God revealed His name as Yahweh to Moses, it was a revelation of the name of our Triune God.  We understand God’s triune nature, but prior to Jesus’ incarnation, it was not possible for the people of Israel to comprehend this.  In fact, the Shema, a prayer that is the “centerpiece” of the morning and evening Jewish prayer services, proclaims that “God is one.”

Deuteronomy 6:4. Hear, O Israel: The LORD our God is one LORD.

That is precisely what God revealed to Moses, and exactly what He wanted His people, Israel, to understand at that time.

God was preparing His people to recognize their coming Messiah, the “seed” that was promised in the garden, the One who would come and rescue fallen man (Genesis 3:15).  From the beginning in the garden, and continuing throughout the Old Testament, we read of God revealing more and more of His purpose and plan of redemption and more and more about who He is…including His name.

The Birth of Jesus

When Jesus was born, the second Person of the Trinity took on flesh.  Since Jesus is one with the Father, it is not wrong to call Jesus by the name, Yahweh, but it fails to recognize the further revelation which God has given.

In the Gospel of Matthew we read of an angel proclaiming that the incarnated Son of God was to be named Jesus:

Matthew 1:21  And she shall bring forth a son, and thou shalt call his name JESUS: for he shall save his people from their sins.

Jesus is Not a Translation of the Name Yahweh

Jesus is actually an English name that derives from the Hebrew name Yeshua (also Yehoshua or Joshua), not Yahweh.  To call the second Person of the Trinity by the name of Yahweh, rather than Jesus, fails to acknowledge His incarnation and atoning work. The name “Jesus” tells us of  His mission and His works, and it’s very clear from the apostle Peter’s words that it is accurate and appropriate for us to use this name:

Be it known unto you all, and to all the people of Israel, that by the name of Jesus Christ of Nazareth, whom ye crucified, whom God raised from the dead.…Neither is there salvation in any other: for there is none other name under heaven given among men, whereby we must be saved. (Acts 4:10, 12 )

The Hebrew name Yeshua means God is Salvation.  Etymology (the study of the history of words, their origins and how their meanings have changed over time) tells us how the name Jesus came to be.  The Hebrew/Aramaic name of Yeshua was translated as the Greek name Iesous. Then it was translated into Latin as Iesus, and from the Latin “Iesus” came the Anglicized name of Jesus.  While the Anglicized name “Jesus” is found in the Hebrew Scriptures as Yehoshua or Joshua, it should be noted that this name is found only of men, never in reference to God.   Yahweh is the name of God found in the Old Testament.

So what name should we use for the Son of Man?  Yeshua or Jesus?  Technically either form of the name is correct.  They are simply the same name, in two different languages, for the Nazarene who was born of Mary in Bethlehem.  However, this should raise another question.  Do both names clearly reveal Jesus as the Christ, the Son of God and our Savior?  And, which name magnifies the Lord above all?

Yeshua is the name the Jews continue to use to refer to the man Jesus of Nazareth.  They believe him to have been nothing more than a good man and a prophet.  Therefore the name Yeshua does not proclaim Jesus as the Messiah of Israel or the Lord and Saviour of mankind.  Remember, there were other men named Yeshua in the Bible….and they were nothing more than mere mortal men.

If a Christian desires to use the Hebrew name, Yeshua, it is certainly acceptable.  However, it would be good to include one of Jesus’ titles so He is clearly identified as the Son of God.  Call Him Yeshua Ha Mashiach,  which is translated into English as Jesus the Messiah.  “Yeshua” coupled with the title “Ha Mashiach” leaves little doubt of Jesus’ Lordship.  Another Hebrew title that could be coupled with the name Yeshua is, Ha Moshia. Yeshua Ha Moshia is translated as Jesus the Saviour and that clearly proclaims Jesus to be the promised Redeemer.

Yahweh = the Great I AM, our Lord our God

The Lord Jesus Christ = I AM is our Saviour, our King

By whichever name you call Him…to Him alone be all the glory, now and forever!

Read more about names of God in the Bible: