What’s the Story Behind “The Gift of the Magi” by O’Henry? 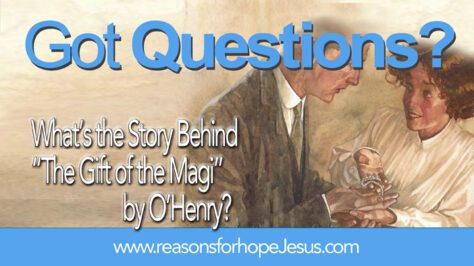 The popular Christmas story, “The Gift of the Magi,” was written by  William Sydney Porter (1862-1910), using the pseudonym, “O’ Henry.”  The plotline of O’Henry’s Christmas story has captivated readers around the globe:

A young couple was deeply in love, but financially poor. Each sacrificed precious possessions to raise money to give a gift to the other.  The husband sold an heirloom pocket watch to buy his wife a set of combs and pins for her hair (In the late 1800’s, such things were made of tortoise shell, pearl, or ivory. They were very expensive and greatly desired).  The wife—whose lovely hair was her pride and joy— had her long hair cut, and she sold the hair to buy her husband a gold chain for his treasured pocket watch.

Selfless love is certainly demonstrated in the actions of O’Henry’s characters. But the story has a deeper meaning when it’s understood to reflect the ultimate act of sacrificial love on which O’Henry’s based his story.

O’Henry’s story of sacrificial love reminds us of the sacrficial love of God. Let’s consider the prophecies of Isaiah and the historical accounts of the Gospels, and then compare God’s story to O’Henry’s story.

The book of Isaiah points to the coming Saviour in a number of key passages. Isaiah prophecied of the One who would someday be, “led like a Lamb to slaughter” (53:7), and “by Whose stripes we are healed (Is. 53:5, I Peter 2:24).  Writing around 750 BC, Isaiah amazingly portrayed scenes from the Saviour’s time on earth that would be fulfilled and later written about in the Gospel accounts.

We can clearly see the parallels in O’Henry’s “Gift of the Magi.” The husband and wife had such great love for each other, that they sacrificed their treasured posession to purchase a gift that would bring the other joy. This certainly reflects God’s love.  He cherishes His only begotten Son, Jesus. Yet, “it pleased the Father to bruise Him” (to sacrifice Him) Isaiah 53:10.  Why? Because of His great love for the world and knowing that His sacrifice would bring everlasting joy!

For God so loved the world, that he gave his only begotten Son, that whosoever believeth in him should not perish, but have everlasting life. (John 3:16)

Both the story of O’Henry and the greatest story ever told (God’s story of redemption) are stories of great sacrifice that led to abundant joy for the recipients of the gifts!

The Differences in the Two Stories?

While the similarities in the stories are interesting, the differences between them are most significant.