Three Heavens? Where is the Third Heaven? 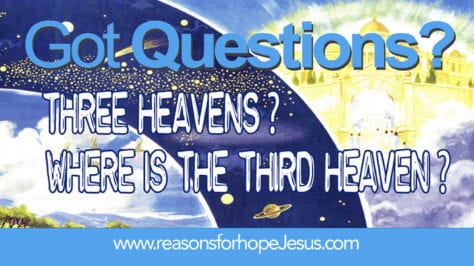 Many Christians don’t understand that there are three heavens.  They of Heaven only as the place where God dwells, the place where redeemed souls go at death.  But the Bible clearly tells of three distinct heavens (after the second day of creation). To unpack this, let’s start “in the beginning.”

The “face of the deep” is a reference to water that was between God’s dwelling place and the heaven and earth that God created. Some think this is water on the earth, but it can’t be because, on the second day of creation, God places a heaven (a firmament) “in the midst of the waters.”  There’s no body of water on the earth that has a heaven in it.  Let’s finish reading about day one before moving on:

Gen 1:3-5 And God said, Let there be light: and there was light.  And God saw the light, that it was good: and God divided the light from the darkness.  And God called the light Day, and the darkness he called Night. And the evening and the morning were the first day.

Gen 1:6  And God said, Let there be a firmament [defined as a heaven in Gen 1:8) in the midst of the waters, and let it divide the waters from the waters.

This heaven that God called into being (“ Let there be”) on day two is the second heaven.  It is “in the midst of the waters.”

Note that by God placing the heaven (the firmament) in the midst of the waters (the deep from verse 2), there was water above and below this heaven. God calls that to our attention because it is important.

Since day two of the creation week, there are three heavens.  The first heaven — the one God created when He created the heaven and the earth on day one.  The second heaven (firmament) — the heaven God called into being (“let there be”) and put “in the midst of the waters,” with water above and below it. And the Third Heaven, which has always existed and is the dwelling place of God and all the heavenly host.

Deut 10:14  Behold, the heaven [2nd heaven] and the heaven of heavens [3rd heaven] is the LORD’S thy God, the earth also, with all that therein is [1st heaven].

1 Ki 8:27  But will God indeed dwell on the earth? behold, the heaven and heaven of heavens cannot contain thee; how much less this house that I have builded?

2 Chr 6:18  But will God in very deed dwell with men on the earth? behold, heaven and the heaven of heavens cannot contain thee; how much less this house which I have built!

Neh 9:6  Thou, even thou, art LORD alone; thou hast made heaven [second heaven], the heaven of heavens [Third Heaven], with all their host, the earth, and all things that are therein [including the first heaven], the seas, and all that is therein, and thou preservest them all; and the host of heaven worshippeth thee.

Psa 113:4  The LORD is high above all nations, and his glory above the heavens [plural].

Jesus passed through all three heavens when He ascended:

Heb 4:14  Seeing then that we have a great high priest, that is passed into the heavens (plural), Jesus the Son of God, let us hold fast our profession.

Eph 4:10  He that descended is the same also that ascended up far above all heavens, that he might fill all things.

So what and where are these three heavens?

The first heaven is clearly seen by everyone on earth.  It is the atmospheric heaven in which birds (Jer 4:25) and airplanes fly. Man can easily observe this heaven.  It extends about 62 miles above the earth according to NASA’s determination of where outer space (the second heaven) begins.

We’ve already read that on day two of creation, God placed the second heaven (the firmament) in the midst of the waters, with water above and below.  However, the water below the second heaven is no longer there — or at least not in the same quantity or depth as the water above.  Much, or all, of that water was rain of the Great Flood.   There is no great barrier, or gulf, between the first and second heavens. In fact, the earth’s atmosphere (the air we breathe) is thought to permeate as far as 6,000+ miles above the earth, well into outer space. There is, however, still a great “body” water between the second heaven and the Third Heaven. In Revelation 4 it’s described as a glassy sea.

We understand the second heaven to be the celestial heaven in which are the planets, galaxies, and stars.  It is the outer space where spaceships and astronauts have ventured and have observed the creation of God that He put there on the fourth day of creation:

Gen 1:14, 16, 19  And God said, Let there be lights in the firmament [heaven] of the heaven … And God made two great lights; the greater light to rule the day, and the lesser light to rule the night: he made the stars also….  And the evening and the morning were the fourth day.

Gen 15:5  And he brought him forth abroad, and said, Look now toward heaven, and tell the stars, if thou be able to number them: and he said unto him, So shall thy seed be.

The Third Heaven is the Heaven of heavens where the throne of God is.  It is the place of glory in which God and the heavenly hosts dwell.  Isaiah gives us a brief description of his vision of God.

Isa 6:1-4  In the year that king Uzziah died I saw also the Lord sitting upon a throne, high and lifted up, and his train filled the temple.  Above it stood the seraphims: each one had six wings; with twain [two] he covered his face, and with twain he covered his feet, and with twain he did fly. And one cried unto another, and said, Holy, holy, holy, is the LORD of hosts: the whole earth is full of his glory. And the posts of the door moved at the voice of him that cried, and the house was filled with smoke.

We are told that the apostle Paul was taken to the Third Heaven to be instructed by Jesus.

2 Cor 12:2  I knew a man in Christ above fourteen years ago…such a one caught up to the third heaven.

And, in the book of Revelation, we get a very descriptive glimpse of what the throne room looks like and the glory that fills it.

Rev 4:1-11  After this I looked, and, behold, a door was opened in heaven…behold, a throne was set in heaven, and one sat on the throne. And he that sat was to look upon like a jasper and a sardine stone: and there was a rainbow round about the throne, in sight like unto an emerald. And round about the throne were four and twenty seats: and upon the seats I saw four and twenty elders sitting, clothed in white raiment; and they had on their heads crowns of gold. And out of the throne proceeded lightnings and thunderings and voices: and there were seven lamps of fire burning before the throne, which are the seven Spirits of God. And before the throne there was a sea of glass like unto crystal: and in the midst of the throne, and round about the throne, were four beasts full of eyes before and behind. And the first beast was like a lion, and the second beast like a calf, and the third beast had a face as a man, and the fourth beast was like a flying eagle. And the four beasts had each of them six wings about him; and they were full of eyes within: and they rest not day and night, saying, Holy, holy, holy, Lord God Almighty, which was, and is, and is to come. And when those beasts give glory and honour and thanks to him that sat on the throne, who liveth for ever and ever, The four and twenty elders fall down before him that sat on the throne, and worship him that liveth for ever and ever, and cast their crowns before the throne, saying, Thou art worthy, O Lord, to receive glory and honour and power: for thou hast created all things, and for thy pleasure they are and were created.

That’s Really Is All We Know

We must be very careful not to let reports of people going to Heaven and returning influence our understanding of Heaven (Read: Is Heaven for Real?).  Only God’s Word is 100% accurate and trustworthy to teach us what God wants us to know.

Therefore, God’s Word is sufficient and we can rejoice that one day all of us who belong to Jesus will see and experience the glory of the throne room and the radiance of the Lord’s face: