Sheol, Hell, Torment, Abyss, Tartarus, Gehenna, Fire, Darkness? What & Where Are They? 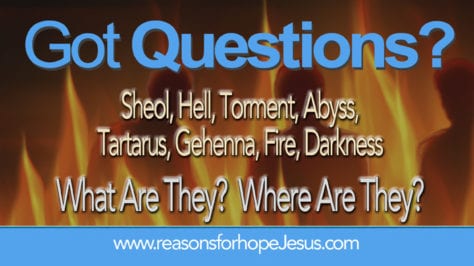 Sheol, Hades, Hell, the Place of Torment, the Abyss, the Bottomless Pit, Tartarus, Gehenna, the Lake of Fire and Outer Darkness are all the names of places of punishment and death.  What do we know about them? Where are they?  None of them are visible on the face of the earth, but the Bible does give information about where they are and the purpose of each.

Prior to Jesus’ atonement for the sins of man, the souls of all who died went to a place called Sheol (Hebrew).  It is defined as the world of the dead, the underworld, and, in the Old Testament, the word is translated into English as the pit, the grave, and hell.

In the New Testament, the Greek word for this place is Hades, and our English translation is Hell.

In Luke 16:19-31, Jesus described the abode of the dead as having two compartments.  One, a place of torment.  The other, a place of comfort called Abraham’s Bosom, which is no longer inhabited.

Although this article is about the places of punishment, we’d be remiss not to address Abraham’s Bosom, the place of comfort, prior to Jesus’ atonement for sins.  Abraham’s Bosom was in the “heart of the earth” (Mat 12:40), and was a type of holding cell for the righteous who died prior to Jesus’ ascension back to Heaven (Acts 1) when He opened the way to Heaven for all who repent and trust in Him.

Abraham’s Bosom is now empty.   Ephesians 4:8 tells that “When [Jesus] ascended up on high [to Heaven], He led captivity captive…”  That means He led those in Abraham’s Bosom to their heavenly resting place.  Since that time, when someone dies in Christ, they go immediately to be with Jesus (Phil 1:23, 2 Cor 5:6, 8, Rev 6:9, 1 Thess 4:14). (For more information, read Where did OT saints go at death? Abraham’s Bosom? Where was it?).

The Place of Torment

Before the cross, all who died in their sins went to the Place of Torment spoken of in Luke 16:24. This is true after the cross also.  All unregenerate people go to the Place of Torment, which is in the earth.  Since forgiven sinners, regenerated by God, now go directly to Heaven, Abraham’s Bosom (the place of comfort) is no longer inhabited and there only remains the place of torment.  So when we call this place Hell (or Haides), it no longer means simply the abode of the dead (as in Old Testament times).  Hell clearly now means the abode of the unrighteous dead.  It is a holding place for the souls of those who rejected God, and one day those souls will be raised in a bodily resurrection (John 5:28) to be judged by their works (Rev 20:11).

The Book of Enoch lists four compartments in the underworld (1 En 22:9-13).  However, it must be noted that the Book of Enoch is apocryphal, meaning it is not recognized as Holy Scripture.  While it is a book that has survived through the ages, the teachings cannot be considered inspired or infallible. The Book of Enoch contains many teachings that are incompatible with biblical truths and therefore discredits it as anything more than an ancient book.  Never attribute any authority to its teachings.  It can be interesting to read, but always remember what it says is of questionable truth.

That said, the book does tell about the abode of the dead.  It tells of the two compartments mentioned in the Bible in Luke 16 and also tells of two more places that hold spirits. This is for your consideration only.

The Book of Enoch elaborates on what the Bible tells about the destiny of those who died in the Great Flood.  Genesis 6 tells of the time when corruption reigned on the earth and the thoughts of men’s hearts were evil continually (Gen 6:5). All of the people, except eight people — Noah and his family — perished in the flood waters.

We know that the reference to “death and Hell” is a reference to the place of torment for unregenerate human souls, but what about the dead that the sea gives us?   If the Book of Enoch is correct, saying that they come up from the deepest parts of the sea, then those who are raised up would pass through the waters of the sea, which was the original cause of their death (Genesis 6).  That would make this place, in the depths of the sea, a type of Davy Jones’s Locker, a type of holding cell until final judgment.

While this book is not considered authoritative truth, the description of this third place does seem to fit somewhat with that which we know about the Abyss, the Bottomless Pit, Tartarus, and Outer Darkness (to be covered in part two of this article).

The Book of Enoch also suggests a fourth place, however, what it does not harmonize with the teachings of the Bible.  The Book of Enoch tells that some sinners will be distinguished from the transgressors (those who sinned grievously) and that Jesus will cause them to repent, and, through His name, they will be saved (Enoch 50).  This is in direct contradiction to biblical teachings and therefore should be rejected.

Again, while the Book of Enoch is an ancient writing that has survived the ages, it is not the Word of God.  It might be interesting, but it is not inspired by God or preserved by Him.  Read it only with a curiosity, never for doctrinal instruction.

Summary of Hell (Hades) After the Cross

So, what are all those other places? What do we know about them?
In Part Two, we’ll consider what the Bible teaches about the Abyss, Gehenna, the Lake of Fire, and Outer Darkness.

We Don’t Want Anyone to Go to Hell

Be diligent and bold to share the gospel with all people.  Those who do not know Jesus need to hear the good news of His saving grace.  Those who do know Jesus will be strengthened and encouraged when you share gospel truths with them.