Hello Darkness, My Old Friend: The Sounds of Silence 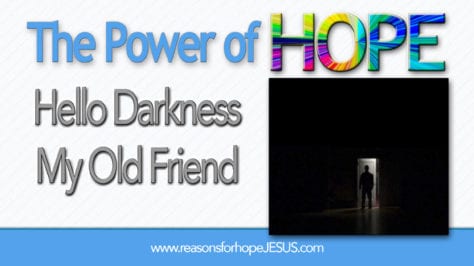 Many of the psalms speak profoundly of the sadness and darkness that casts the soul into the depths of despair.  But most psalms end with a quieted spirit and a renewed hope.  That’s not true of Psalm 88. From beginning to end, darkness is the theme of the psalm and sadness is its music.  Psalm 88 ends without offering any comfort or relief in the midst of great suffering.

Let’s learn about Psalm 88 to learn from Psalm 88. Let’s look at the words of the psalmist.  This is not a psalm of David.  Verse one tells us that it was authored by Heman.  There’s a man named Heman in 1 Kings 4:31 and another in David’s time who was a chief singer (1 Chron 15:19). We do not know if one of them wrote this psalm, or if it was another. However, whoever wrote the psalm we clearly hear the words of a severely troubled soul.

After looking at the words of this psalm, we’ll go back a few decades to a ballad that echoed the heart and soul of the ancient psalmist.  The lyrics of the ballad were written for a generation in the midst of radical change.  It was a time of self-proclaimed progressivism, yet many were experiencing the same despair and confusion of the psalmist in ancient Israel.

Please keep reading until you get to the 1960’s song.  It just might surprise you to read the connection between the ancient and the recent words.  However, it shouldn’t be too much of a surprise since we know, “there’s nothing new under the sun.”  Despair has darkened the souls of all people, throughout all history, and only the Light of the World can dispel such darkness.

Psalm 88 was meant to be sung while the Israelites were walking on their way to a service of worship.  It was written to the sons of Korah and for the chief musician. It begins with a weeping before the Lord:

When we weep, we should always weep to God.  We should take our tears to Him, our sadness, and our sorrow.  In another psalm, we are assured that God hears our cries and sees our tears:

Psa 56:8  You number my wanderings; Put my tears into Your bottle; Are they not in Your book?

Psa 56:9  When I cry out to You, Then my enemies will turn back; This I know, because God is for me.

The psalmist begins his lament by describing the calamities he faces. “My soul is full of troubles” (vs 3), he cries to the Lord.  He says that he is like those “whom You remember no more, and who are cut off from Your hand.” (vs 5).  Desperation is heard in his voice and he clearly reveals that he feels God isn’t present. The psalmist speaks with an expectation of his death:

Next, the psalmist cries out to God (vs. 10-13) asking how can he worship and praise God if he is no longer among the living or if he remains in this despair:

The remainder of the psalm is more lament, more despair, and more confusion.  The NIV Bible translates the last words of this psalm as “darkness is my closest friend.” (vs 18b)

It doesn’t get much more despairing than feeling darkness all around.  Haven’t we all felt that way at some time?  Darkness diminishes our vision and despair displaces our hope.  We feel like God is not present and all we hear are the sounds of silence.

The Sounds of Silence is the title of a popular 1960’s song written by Paul Simon and performed by himself and Art Garfunkel.  Both Simon & Garfunkel are Jews, and in this song we hear echoes of the words from the songbook of their religion. The same lament of the ancient psalmist (c. 1531BC) is expressed in Paul Simon’s lyrics.  Both are laments of despair, loneliness, and silence.  But the 1960’s song ends in a very different way than the 88th psalm. It ends with a “whisper in the sounds of silence.”  Let’s look at five lessons we can learn from these lyrics.

The Sounds of Silence

When the dark seasons of the soul overwhelm us, we can find hope in the words of the Bible.  Psalm 88 is meant to drive us to the only One who can deliver us from despair.

So why is Psalm 88, such a depressing psalm, in the Bible?  It’s there to drive us to the only One who can deliver us from despair and give us hope in times of trouble.

Darkness may be an old friend, as Paul Simon wrote, but darkness is not our closest friend, as one Bible translation has written in Psalm 88. While there are times when it might seem that way, Jesus is always our closest friend!  God will not leave us in despair.  Our hope is in Him and He has promised that He will never leave or forsake us (Hebrews 13:5).  He has promised to be with us always (Mat 28:20).

How to Hear God Whisper?  Be Still and Listen…

With a prayerful, seeking heart. King David exemplified this kind of heart, when he said, “O God, You are my God; Early will I seek You; My soul thirsts for You; My flesh longs for You In a dry and thirsty land Where there is no water.” (Psa 63:1)

With a diligent mind.  As you read and study God’s Word, you will come to know Him better.  God speaks most clearly through His Word, and so we are told, “study to show yourself approved unto God.” (2 Tim 2:15)  When we study His Word, God approves for two reasons: 1) we are being conformed to the image of His Son (Rom 8:29) by the renewal of our minds, and 2) we are not being conformed to the ways of the world (Rom 12:2).

With an obedient will.  What we read, we should heed.  God clearly tells of His will and His ways.  Therefore, we should trust in His commands, be surrendered to His will, and know that His ways are higher, and better, than our own (Isa 55:9).

With a patient soul.  God speaks in His time. Find rest in Jesus.  Find peace in knowing God hears your petitions and that He offers real comfort, unfailing love, and amazing grace.  Wait on the Lord and hear Him whisper in the sounds of silence:

Watch for next week’s Power of Hope article, The Super Bowl of  Drunkenness.