What Did Jesus Say About Hell? 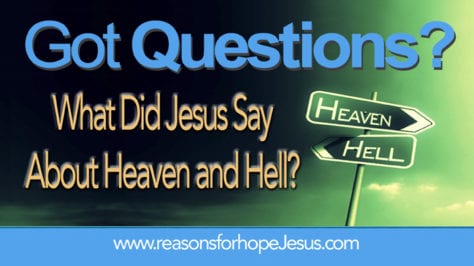 Click here to read, What did Jesus say about Heaven?

Jesus said a lot about both places.  He spoke of both Heaven and Hell as being real, literal, physical places and He described both places the eternal dwelling place for the soul. Furthermore, Jesus taught that all people have a choice to make, and that choice will determine their eternal destiny.

We find several descriptions of Heaven in the Bible (especially Rev chapters four and five), but no clear pictorial descriptions of Hell (read what the Bible does reveal: Is Hell a real place?).  While we are not given a clear image of Hell, Jesus did speak of it.  Jesus spoke about Hell more than anyone else in the Bible, and in doing so He revealed sufficient information for our understanding and gave explicit warnings of the dangers of Hell.

It’s interesting in that the apostle Matthew recorded more of Jesus’ teachings about Hell than did the other Gospel writers.  That shouldn’t be surprising because in Matthew’s Gospel Jesus is presented as the coming Messiah and King.  Matthew records more information about the Kingdom of Heaven than the others so he also records more information about the abode of the dead than the other gospel writers.  In Matthew, Jesus makes a direct reference to Hell nine times as compared to Mark and Luke in which Hell is spoken of three times and not at all in John.

Let’s walk through the Gospel accounts and hear the words of Jesus regarding the place where unregenerate people will spend eternity.

The Gospel of Matthew, Direct References

The Gospel of Mark

In Mark, Jesus mentioned hell only three times in one passage.  However, in that passage, He gave a clear message of warning of the dangers of hell and the presence of flames of fire.

The Gospel of Luke

Jesus also spoke of hell using other terms, such as “destruction,” “fire/flame,” and “condemnation/perishing.”

Hell is a Real Place

It’s a real place that we don’t want anyone to go to.  The reality of Hell should encourage us to share the gospel of saving grace will all people.  Only by coming to Jesus in faith, and trusting in His finished work on the cross to pay for one’s sins, can anyone escape the dangers of Hell. Tell people about the gracious forgiveness of sins that Jesus offers them and the new and eternal life that He desires to give to them.

When you can’t share the gospel with your words, share it by leaving tracts that tell people about God’s grace.

When you leave a tract, always be diligent to pray for the short gospel message. Pray that it be found by someone who is in need of Jesus’ saving grace, and pray that the person will have a tender heart and open ears to receive the gift Jesus desires to give them.

READ ALSO:  What Did Jesus Say about Heaven?