Are blood transfusions OK for Christians? 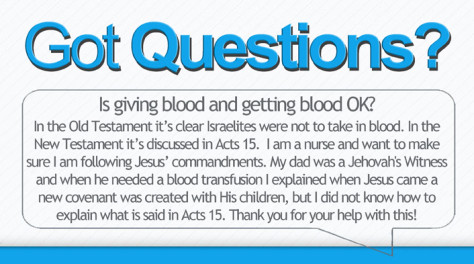 It must be noted that the Old Testament prohibition about blood is a dietary restriction.  It is about ingesting blood by mouth.  It is not about a medical procedure in which blood is transfused (for medical treatment) or drawn (for either testing or donating).

Any confusion about the Acts 15 references can be cleared up by understanding what James is saying, and to whom he is speaking, in these verses:

Acts 15:20  But that we write unto them, that they abstain from pollutions of idols, and from fornication, and from things strangled, and from blood.

Acts 15:29  That ye abstain from meats offered to idols, and from blood, and from things strangled, and from fornication: from which if ye keep yourselves, ye shall do well. Fare ye well.

While James thought that the Gentile converts should not be held to the Jewish regulations, he also believed there were certain practices to which they should submit.

He mentioned four things, 1) eating food offered to idols, 2) sexual immorality, 3) eating food from animals that had been strangled, and 4) eating food with blood.

Three of the four things mentioned (1, 3 and 4) have to do with eating something, so again we see a prohibition against ingesting blood.

These restrictions may have been given to promote peace among Jewish and Gentile believers.  The prohibition of ingesting blood went all the way back to the covenant God made with Noah  in Genesis 9, predating the levitical law, in which God gave an explicit command prohibiting the ingestion of blood.

Genesis 9:3-4  Every moving thing that liveth shall be meat for you; even as the green herb have I given you all things.  But flesh with the life thereof, which is the blood thereof, shall ye not eat.

In these two Old Testament passages, we can clearly understand the significance of blood to the Israelite people.  It was declared by God that the life of the flesh is in the blood and it was the means by which atonement was made (Leviticus 17:11).   Clearly God is speaking of not ingesting animal blood here (Leviticus 17:13).

In the  next verse (Leviticus 17:14), God proclaims that “the life of all flesh” is “the blood of it”and you “shall EAT the blood of no manner of flesh”or the person would die.  This is very serious.  There were consequences of death for violating this command of God, but remember this is written to the nation of Israel under the Old Covenant.  Under the new covenant, the ceremonial rules and dietary restrictions of the nation were lifted.  This is revealed when Peter had a vision of a sheet lowered from heaven that held many animals, some of which were restricted for consumption under the Old Covenant.  Peter spoke to the Lord and the Lord replied.

Acts 10:14-15  But Peter said, Not so, Lord; for I have never eaten any thing that is common or unclean.  And the voice spake unto him again the second time, What God hath cleansed, that call not thou common.

The Lord told Peter that these animals were now to be considered clean because He had cleansed them.  This indicates a lifting of the dietary restrictions, however it does not remove the truth of what God declared when He said that the life of the flesh is in the blood (Genesis 9:4, Leviticus 17:11, 14).  So if someone ingests blood now, under the new covenant, they will not suffer the consequences of the levitical law, but we must still remember the importance of “life in the blood.”

These passages should instruct Christians about the sanctity of life, for without blood man will die physically and with the blood atonement of the Lamb of God man can live eternally with His Lord and Saviour.

This should answer the questions about Acts 15.  As referenced in Acts 15, abstaining from blood means not ingesting blood or eating an animal before draining its blood.  James said this not as a command, but as a way to bring harmony and avoid division among the Jews and Gentiles.

Therefore, getting blood by transfusion for medical reasons is acceptable for Christians.  Giving blood (for donation or for medical testing) is also OK.  And, I’m sure most will agree…so also is eating a rare-cooked steak!

Got Questions? Submit them to questions@reasonsforhopejesus.com