What are the Seven Deadly Sins? 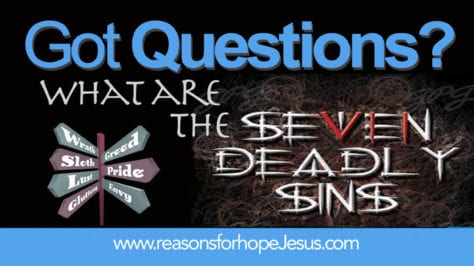 The Seven Deadly Sins are defined as pride, greed, lust, envy, gluttony, wrath, and sloth.  That said, nowhere in the Bible is this list of sins found.  And, they are not more “deadly” than any other sins. So, from where did this list originate?

Origin of the “Seven”

A fourth-century Christian monk, Evagrius of Pontus (345–399 AD, also called Evagrius the Solitary), identified what he thought were eight sins that “outweighed” other sins. Pope Gregory 1 (Gregory the Great) adopted seven from the list and added them to Roman Catholic doctrine in the sixth century. The list became fundamental to Catholic confessional practices and the seven sins were called the seven capital sins or the seven cardinal sins.  The concept of identifying these “deadly sins” was to help people overcome behaviors that could lead to sins that can (according to Catholic doctrine) sever the soul from grace (defined in Catholic doctrine as unrepentant mortal sins).

The early Catholic Church also added to its Catechism “Seven Virtues,”  called “The Heavenly Virtues,” and defined as four classical—prudence, justice, temperance and courage (or fortitude)— and three theological virtues—faith, hope and charity. In the early fifth century, a list of another seven virtues to oppose the Seven Deadly Sins was put forth in a poem by Aurelius Clemens Prudentius titled, “Battle/Contest of the Soul.”  The poem tells of the battle between good virtues and evil vices. The poem defined the good virtues as 1) humility, 2) charity (love), 3) chastity (purity), 4) gratitude, 5) temperance, 6) patience, and 7) diligence.

While the list of the Seven Deadly Sins is not found in the Bible, the defining of them being sin is certainly recorded.

The Bible’s List of the “Seven Sins God Hates”

There is a list of seven sins in the Bible.  These are seven are proclaimed as detestable unto God.  In fact, the Bible tells that God “hates” these sins and one is an “abomination.”  They are found in Proverbs chapter 6.

Prov 6:16-19  These six things the LORD hates, Yes, seven are an abomination to Him:  A proud look, A lying tongue, Hands that shed innocent blood, A heart that devises wicked plans, Feet that are swift in running to evil, A false witness who speaks lies, And one who sows discord among brethren.

So Are Those “Seven” Deadly Sins?

For eternal life, those sins are no more deadly than a little white lie.  Jesus said that we are to be perfect, as our Father in Heaven is perfect.  Man can never achieve that.  Therefore, God sent Jesus to live the life we cannot live and die the death that we should die—all to pay for our sins!

The idea of some sins being “deadly” and others being not “deadly” comes from a verse in 1 John:

1 John 5:16  If anyone sees his brother sinning a sin which does not lead to death, he will ask, and He will give him life for those who commit sin not leading to death. There is sin leading to death. I do not say that he should pray about that.

Therefore, Christian should understand the “sin [of a brother, a fellow believer] which does not lead to death” as a sin in their sanctification that does not lead to a physical death of the body.  For Christians, all their sins (past, present and future) have been washed away in their justification [Read:  The Gift of SalvaTION: Justification & Imputation and What you need to know about Sanctification & Glorification]  For Christians, no sin can be deadly to the point of severing the soul from grace (salvation). For the nono-Christian, all sins warrant that kind of death.

The prayer spoken of in 1 John 5:16 is one of intercession, It’s a prayer asking God to help a brother to overcome ongoing sin during his life of sanctification (from salvation to the time one goes to be with Jesus). While sins in our sanctification cannot condemn, they can certainly be harmful.

There is sin leading to death. I do not say that he should pray about that.

Since this is speaking of a “brother” (a believer), this must be speaking of a physical death as a consequence of sin. Again, we know that for a believer, their salvation (their spiritual life) is secure (Read: How can I convince someone that they have eternal security?   Can I lose my salvation?)

God has the right to end a person’s life if one’s sin is such that God deems to judge it with physical death.  For a believer committing such grievous sin, the person is to make a personal petition. The prayers of others are of no avail. The person must personally repent.  Keep in mind, if God judges a believer’s sin to be worthy of death it is not unloving. A Christian who sins “a sin leading to [physical] death” will never suffer spiritual death.  Instead, they will be removed from the ability to commit such a sin and will enter into eternal life in Heaven.

Remember, the soul is eternal for all human beings, but without Christ, man’s soul is already dead because man is born dead.  It is by trusting in Jesus that our souls are quickened (made alive/ regenerated, Eph 2:1, 1 Pet 3:18)   Once regenerated, forgiven sinners are sealed by the Holy Spirit, and although still able to commit a sin unto death of the body, never commit a sin unto death (condemnation) of the soul.

For those who are not in Christ, their souls are already “dead” — they are unregnerate and already condemned.

John 3:18  “He who believes in Him is not condemned; but he who does not believe is condemned already, because he has not believed in the name of the only begotten Son of God.

This is why Jesus said, “you must be born again.”  (John 3:3, 7)  The dead soul must be regenerated.  Adam was made a living soul (Gen 2:7) when God created him, but since Adam sinned every person needs the Holy Spirit to give life to his soul. (Read: Are we a soul? Or do we have a soul?   Are We Dichotomy or Trichotomy Beings?)  Tell someone about life in Christ today.