Is the Great Commission in the Book of Luke? 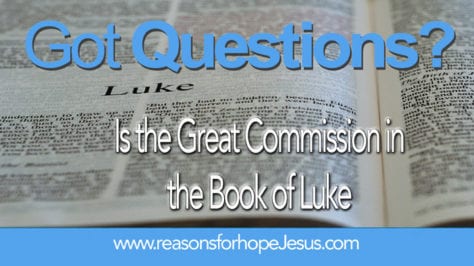 “The Great Commission” is a call to preach the gospel and make disciples, and it’s given to all who belong to Jesus.  Jesus most clearly gave this commission in the gospel accounts of Matthew, Mark, and John.  He gave His followers, His disciples, a clear directive.  He commissioned and commanded them to preach His saving grace “to every creature” and to make disciples of all nations.  This is “The Great Commission.”

Mark 16:15  And He said to them, “Go into all the world and preach the gospel to every creature.”
Mat 28:19 “Go therefore and make disciples of all the nations, baptizing them in the name of the Father and of the Son and of the Holy Spirit.”
John 20:21  So Jesus said to them again, “Peace to you! As the Father has sent Me, I also send you.”

While it’s not as easy to find the Great Commission in the book of Luke, it is there.

The Great Commission in The Gospel of Luke

Luke presents Jesus as the Son of God, fully man in His incarnation. Jesus lived a human life, as we do, but He was born without sin and died without sin.  We also find in the book of Luke our “walking papers” — our commission to be ambassadors of the Lord’s saving grace and teachers of all that He is.

The Book of Luke closes without giving a record of Jesus’ time with His eleven faithful disciples after the resurrection. Instead, Luke records an encounter Jesus had in the afternoon hours of Sunday in which he joined two disciples (not of the 11) on the road to Emmaus.  These two had followed Jesus and they had been witnesses to what had taken place. Before we look at what Jesus said to them, let’s note that they were two witnesses. This is significant because it is a fulfillment of God’s requirement for sound testimony:

One of the two witnesses is identified. He is Cleopas (Luke 24:18). The other remains unidentified, although some have considered it to be Cleopas’ wife from the singular reference of one heart in verse 32 (“Did not our heart burn within us while He talked with us on the road, and while He opened the Scriptures to us?”) and no reference to indicate gender in verse 13 (Now behold, two of them [followers/disciples] were traveling that same day to a village called Emmaus, which was seven miles from Jerusalem.)

Understand that while one of the witnesses might have been the wife of Cleopas, we do not know that.  What we do know is that there were two witnesses and Cleopas was one of the two.

“These are the words which I spoke to you while I was still with you, that all things must be fulfilled which were written in the Law of Moses and the Prophets and the Psalms concerning Me.” And He opened their understanding, that they might comprehend the Scriptures.

While two was the minimum required number of witnesses, the Law also suggested three witnesses to establish a matter (Deu 19:15).  In the verses above (Luke 24:44-45) Jesus referred to three witnesses that testify — “the Law,” “the Prophets,” and “the Psalms.”  Those three testify of the Lord’s work in salvation and the love of God.

In verse 44 (above), Jesus clearly told the disciples that all things written concerning Himself had to be fulfilled. He then reminded them that they had just seen this fulfillment:

Luke 24:46  Then He said to them, “Thus it is written, and thus it was necessary for the Christ to suffer and to rise from the dead the third day,”

After Jesus opened the Scriptures regarding what they had witnessed, Jesus gave a commission to the two disciples. He told them that saving grace is to be preached to all nations.  He also reminded them of the confidence they have as having been “witnesses of these things” and He told them of the power they would soon receive (the gift of the Holy Spirit).

Luke 24:47-49 “and that repentance and remission of sins should be preached in His name to all nations, beginning at Jerusalem. And you are witnesses of these things. Behold, I send the Promise of My Father upon you; but tarry in the city of Jerusalem until you are endued with power from on high.”

We Are To Be Witnesses

All who belong to Jesus have been to the cross.  We have repented and trusted in Jesus. We have received His forgiveness, and we have been raised to new life.  We have been witnesses of all these things. And, we are to preach repentance and remission of sins in Jesus’ name to all nations.

Equipped, Encouraged, and Empowered by Jesus

We also walk a “path to Emmaus” (Emmaus means hot springs).  We begin as babes, eagerly desiring the “milk of the Word” (1 Pet 2:2). But we are to move on from milk to the “solid food” of increased knowledge (Isa 28:9). A newborn baby who does not move on from milk to solid food will not thrive.  So also believers who do not move from the milk of the word to deeper knowledge and understanding will not thrive.  Jesus desires that we thrive and that our hearts to burn to know Him just as did the hearts of the two on the road to Emmaus.

Luke 24:32  And they said to one another, “Did not our heart burn within us while He talked with us on the road, and while He opened the Scriptures to us?”

Jesus does not want lukewarm devotion:

Jesus “opened the Scriptures” to His followers while He was here on earth so that they would know Him. He does the same for us.  He has given us the power the Father promised (Luke 24:49) — the Holy Spirit who teaches us all things (John 14:26) and directs our paths (John 16:13).  Jesus does not want lukewarm followers.  He wants us to journey on the “Emmaus Road” in the direction of the “hot springs.”

Yes, our commission to evangelize (preach the gospel and make disciples) is found in the book of Luke. The commision Jesus gave to the two disciples on the Emmaus Road (repentance and remission of sins should be preached in His name to all nations) is the same for us.

We are to share the good news of Jesus’ saving grace, and we are to have confidence in our ability to do so because it’s not by our power.  God gives us the same power that He promised to the two on the road to Emmaus —  the power of the Holy Spirit who indwells, teaches, guides, and directs us in all things.

Zec 4:6 Not by might, nor by power, but by my spirit, saith the LORD of hosts.
John 14:26  …the Holy Spirit, whom the Father will send in my name, he shall teach you all things…
John 16:13 Howbeit when he, the Spirit of truth, is come, he will guide you into all truth…