Should We Not Repeat Prayers Because of Vain Repetitions? (Matt 6:7) 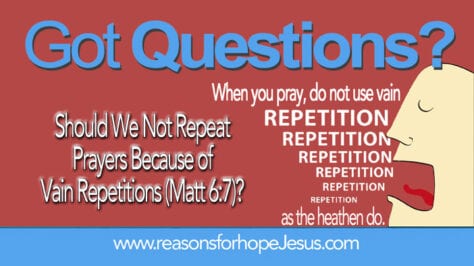 This question addresses the words of Jesus in Matt 6:  “when you pray, do not use vain repetitions as the heathen do. For they think that they will be heard for their many words” (Matt 6:7). Let’s gather a little background information before we answer the question.

Jesus spoke these words to the multitudes, a mixed crowd of both Jews and Gentiles. They had gathered “from Galilee, and from Decapolis, Jerusalem, (The Decapolis was a district of 10 cities, south of the Sea of Galilee; all but one were east of the Jordan River. The 10 cities had Gentile populations and Greco-Roman culture.)

The words Jesus spoke, recorded in Matt 6:7, were in the context of a long sermon of instruction in righteousness, found in Matthew chapters 5-7. We commonly refer to this passage of Scripture as the Sermon on the Mount.

The Sermon on the Mount

Jesus opened and closed His ministry with sermons.  Matthew 5-7 records His first sermon. Jesus preached this sermon from a mountain near Capernaum (it was really a large hill because there are no actual mountains in that area). Jesus’ last sermon, called the Olivet Discourse, was preached on Mt. Olivet near Jerusalem (Matt 24).  The theme of each of these sermons was the kingdom.

The Sermon on the Mount gave instruction in righteous living. Jesus’ words revealed the blessings, the riches, and the “constitution” of the Kingdom. His message was an exhortation to live peacebly and be God-honoring people. The Olivet Discourse was about the coming of the promised Kingdom.

Among the instructions that Jesus told the multitudes in the Sermon on the Mount, was an admonition not to pray using vain repetitions as the heathens do (Mat 6:7). There are significant reasons why Jesus spoke about this.

Worship and Prayer That Is In Vain

Before giving the admonition to not pray in vain, Jesus warned against praying “like the hypocrites” because they did so to be seen. Rather, Jesus told that prayer is to be an intimate relationship between the Father and His children and that vain repetition is also a way to attract attention to oneself:

Mat 6:5-8 And when you pray, you shall not be like the hypocrites. For they love to pray standing in the synagogues and on the corners of the streets, that they may be seen by men. Assuredly, I say to you, they have their reward. {6} But you, when you pray, go into your room, and when you have shut your door, pray to your Father who is in the secret place; and your Father who sees in secret will reward you openly. {7} And when you pray, do not use vain repetitions as the heathen do. For they think that they will be heard for their many words.  {8} Therefore do not be like them. For your Father knows the things you have need of before you ask Him.”

When speaking to the scribes and Pharisees (recorded in Matthew 15), Jesus called them “hypocrites” (Matt 15:7). He then quoted the prophet Isaiah, and thereby indicated they were the fulfillment of Isaiah’s prophesy.

Mat 15:8-9  These people draw near to Me with their mouth, And honor Me with their lips, But their heart is far from Me. And in vain they worship Me, Teaching as doctrines the commandments of men.

Again, we see Jesus condemning vain worship and vain words (words of men).  These men Jesus referred to (the scribes and Pharisees) were men of the world who thought their good works made them righteous.  They did not follow the doctrines of Jesus, but rather they taught their own doctrines.  “Teaching the doctrines of the commandments of men” is similar to those who were speaking “vain repetitions as the heathen do.”

Jesus’ exhortation was against “vain repetitions.” The keyword here is “vain,” not repetition.  In fact, Jesus went on to give a model prayer and it’s one that is often repeated (we call it the Lord’s Prayer, but it’s really the prayer the Lord gave to HIs disciples to pray).   If a prayer is repeated, but the words are heartfelt, sincere, and intentional, then it is not a vain repetition.

Repetition is not a bad thing.  In Luke 18:1-7 a widow comes before a judge continually asking for justice and Jesus concluded, “… shall God not avenge His own elect who cry out day and night to Him, though He bears long with them?” (Luke 18:7)   Crying out day and night, with the same request, is repetitive. But Jesus tells that God will honor that when it flows from our hearts.  God knows the intentions of our hearts and there may be times when our hearts are so burdened that we can’t find the words to cry out.    Perhaps praying a prayer repetitively is all that one can do.  If those words are God-honoring, God-seeking, intentional, and from the heart, God sees and honors that.

It’s not about the words we use. Rather, it’s about the intentions of the heart that determine if a prayer is acceptable unto God.  We look at the outward (or the spoken) and we judge what we see. God sees the heart.  He knows the real us. And he’s our Father…a good, good Father who loves us.

Pray with Purpose, Not in Vain

Prayer and worship are in vain when repetitive words are used to just “go through the motions.”  Or, to put it another way, when the words come from the head and the mouth but are without any heart devotion.   There are so many beautiful prayers in the Bible, and repeating them can be God-honoring.  Or perhaps you have written your own prayer to God and recite it often.  Repeatedly saying such prayers is not in vain if your heart is engaged, your words have intentional meaning, and your desire is to draw closer to God.   Don’t be a Pharisee who prays in vain.  Be a child of God who approaches one’s Father in faith, hope, and love (1 Cor 13:13).

Read also:  Do You Say or Pray The Lord’s Prayer?