Where Did Jesus Go When He Died? 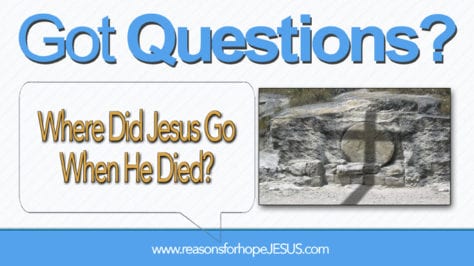 When Jesus died on the cross, where did He go prior to His resurrection three days later?  Does the Bible tell us?

The Bible not only tells where Jesus’ body went, it also tells of His soul and Spirit.

1) Jesus’ body was placed in the tomb of a friend.

Mat 27:59-60  When Joseph had taken the body, he wrapped it in a clean linen cloth, and laid it in his new tomb which he had hewn out of the rock; and he rolled a large stone against the door of the tomb, and departed.

Mark 15:46 And he bought fine linen, and took him down, and wrapped him in the linen, and laid him in a sepulchre which was hewn out of a rock, and rolled a stone unto the door of the sepulchre.

2) Jesus’ soul went into the heart of the earth. In giving a sign to the scribes and Pharisees, Jesus said:

3) Jesus committed His Spirit to His Father:

Luke 23:46  And when Jesus had cried out with a loud voice, He said, “Father, ‘into Your hands I commit My spirit.’ ” Having said this, He breathed His last.

The Heart of the Earth

Jesus’ words, “the heart of the earth,” were a reference to Abraham’s Bosom  (Luke 16).  Abraham’s Bosom was not Heaven. It was a place deep within the earth.  It was a holding place for the souls of all righteous people (those who died with faith in God).

Just as Jesus had said, He was in “the heart of the earth” for “three days and three nights.” Then He rose, bodily from the grave and His soul rose from Abraham’s Bosom.

There was another place (and still is) within the earth.  It is the destiny of all who rejected God prior to the cross and those who now reject Jesus.  The clearest information we have about Abraham’s Bosom comes from Jesus Himself when He told of Lazarus and the rich man.

Luke16:22  “So it was that the beggar died, and was carried by the angels to Abraham’s bosom. The rich man also died and was buried.”

In verse 23, the place of comfort is again referred to as the bosom of Abraham. And it’s revealed that the rich man was able to see both Abraham and Lazarus from the place of torments in Hades.

Luke 16:23  “And being in torments in Hades, he lifted up his eyes and saw Abraham afar off, and Lazarus in his [Abraham’s] bosom.

Jesus Did Not Go to Hell

Some have said that Jesus went to the place of torment to pay for our sins by receiving the punishment we should receive.  This is untrue and is a misunderstanding of the Greek word “hades,” which is translated “hell” in English.  Today we use the word Hell to exclusively mean the place of torment, but prior to Jesus’ atonement for sins, Hell (Hades) was the place of all departed souls.  The word hell referred to both chambers, Abraham’s Bosom and the place of torment. For more information on this, read Did Jesus descend into Hell?

The Heart of the Earth / Abraham’s Bosom / Paradise

Jesus also called “the place of comfort” by the name, “Paradise,” when the thief on the cross proclaimed faith in Him, Jesus said, “…Assuredly, I say to you, today you will be with Me in Paradise.” (Luke 23:43)

Both Jesus and the thief on the cross died that day, and neither went into the presence of the Father in Heaven.  The souls of both entered into the place of comfort.  They went to Abraham’s Bosom.

The Ascension Changed Everything

When Jesus ascended to Heaven, He emptied Abraham’s Bosom and led the Old Testament saints to their heavenly home.

Ephesians 4:8-10  Therefore He says: “When He ascended on high, He led captivity captive, And gave gifts to men.” (Now this, “He ascended”; what does it mean but that He also first descended into the lower parts of the earth? He who descended is also the One who ascended far above all the heavens, that He might fill all things.)

In leading the Old Testaments saints into the presence of God, Jesus fulfilled the prophecy of Psalm 68:18

Psa 68:18  You have ascended on high, You have led captivity captive…

Since that time, there remains only one abode of the dead in the earth. It is the place of torments, the place where all who die with unforgiven sins will go.

We don’t want anyone to go to the place of torments. Share the love of Jesus with people today.  Tell of His saving grace to those who do not know Him.  Explain how they can receive forgiveness of their sins, peace with God, and eternal life with Jesus.  Then, when they take their last breath and step into eternity, they will go UP to Heaven not DOWN to Hell. By the grace of Jesus, they will be received into the loving arms of God and the fellowship of all who know and love Jesus.

John 3:16  “For God so loved the world that He gave His only begotten Son, that whoever believes in Him should not perish but have everlasting life.”

John 3:36  “He who believes in the Son has everlasting life; and he who does not believe the Son shall not see life, but the wrath of God abides on him.”

Rom 6:23  For the wages of sin is death, but the gift of God is eternal life in Christ Jesus our Lord.

For more about the place where souls went prior to the cross, read: