Who were the Nephalim & the Sons of God in Genesis 6? 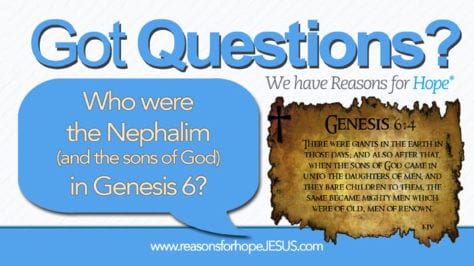 Genesis 6:4 tells of giants in the earth prior to the Great Flood in Noah’s day.  In the original language of the Old Testament Scriptures, the word for giant is the Hebrew word nephiyl, from which we get the term “nephalim,” that is used in reference to the giants in Genesis 6.

There were giants in the earth in those days; and also after that, when the sons of God came in unto the daughters of men, and they bare children to them, the same became mighty men which were of old, men of renown.  (Genesis 6:4)

This verse has been hotly debated for centuries.  Who were these giants?  From where did they come and were they evil? The Bible does not specifically tell us, so we are left to reason from what information the Bible does provide in this passage and others.There are three interpretations of who, or what, these nephalim could have been.  It’s clear they were the progeny of the “sons of God” and earthly women, but that raises the question, who were the sons of God in Genesis 6?

Some suggest they were 1) the sons of Seth, others say 2) the king or rulers of the time and many believe they were 3) fallen angels

Were the “Sons of God” Fallen Angels?

In the Old Testament, we find the term “sons of God” used twice in Genesis 6 and three times in the book of Job.  An interesting contrast is found in that Genesis 6 preceded the Great Flood and tells of the sinfulness of all mankind in those days, while the events of the book of Job occurred after the flood and tell of a godly man, who was persecuted by Satan yet remained faithful to God.  In the passages in Job the term, “sons of God” is clearly used in reference to spiritual beings, angels, who were also created to worship God.

Job 1:6  Now there was a day when the sons of God came to present themselves before the LORD, and Satan came also among them.

Job 38:7  When the morning stars sang together, and all the sons of God shouted for joy?

This supports the reasoning that the term “sons of God” in Genesis 6 were angels, but these would have been the fallen angels who rebelled with Satan.

Let’s understand more about the progeny of “the sons of God” and “the daughters of men” in Genesis 6. They are referred to as giants, from the Hebrew word nephiyl.  Strong’s Bible Dictionary defines the word as:

The word derives from the root word:

The only other use of the word, nephal, in the Bible is found in Numbers 13:33. “And there we saw the giants [nephiyl], the sons of Anak, which come of the giants: and we were in our own sight as grasshoppers, and so we were in their sight.”  The context of the word used in Numbers implies “giants” of stature as understood by the contrast of the people feeling as they were small as grasshoppers.  Therefore, it is believed the same to be true of Genesis 6.  “The giants (nephiyl) in the earth in those days…” were of an abnormally large and threatening size.

With the Bible defining (by cross-reference) that the “sons of God” are angels, and their offspring are abnormally large, threatening “giants,” then it is reasonable to consider that fallen angels mated with the daughters of men ( “…came in unto the daughters of men…” Genesis 6:4) and produced creatures not of God’s design whose extreme wickedness contributed to the sinfulness of Noah’s day. 2 Peter 2:4-6 and Jude 6-7.

We suggest that you study this further and come to your own understanding of the Genesis 6 passage.  Christians hold different views on this chapter and the various interpretations should never be divisive.  What is most important to understand, from Genesis 6, is that in the days of Noah there was such great wickedness and falling away from God that God proclaimed judgment would come.  And, when God sent His judgment upon the earth, it was a righteous judgment of sin that brought a new beginning for man.

One day God will judge the earth and all its people again, and just as God provided a safe ark for Noah and his family, God has already provided an “Ark” for all who are part of His family…for all who are His children.  Unlike Noah, who experienced the judgment but was preserved through it by God, those who belong to Jesus have already been saved from the judgment of their sins.  Jesus took our sins upon Himself and God’s judgment for our sins was poured out on Jesus.  When we trusted in Jesus, He saved us, and our sins were washed away (Revelation 1:5) never again to be remembered again (Hebrews 8:12, 10:17).

Just as God in His righteousness judged sinful man in Noah’s day, He is perfectly just in judging the sinfulness of our day also.  Be diligent to share the love of God with all people and tell those who do not know Jesus that God offers them so great a salvation– a salvation that will rescue them from the judgment of their sins, if they will repent and trust in Jesus and His finished work on the cross.

Let Genesis 6 be a strong reminder that judgment will come to all people.  While God can forgive all sins, He cannot overlook any sin.  Share the saving grace of Jesus with all people and encourage those who do not know Jesus to repent and trust in Him and receive His forgiveness of their sins….before judgment comes and it’s too late.