Be Careful With Your Eyes What You see! 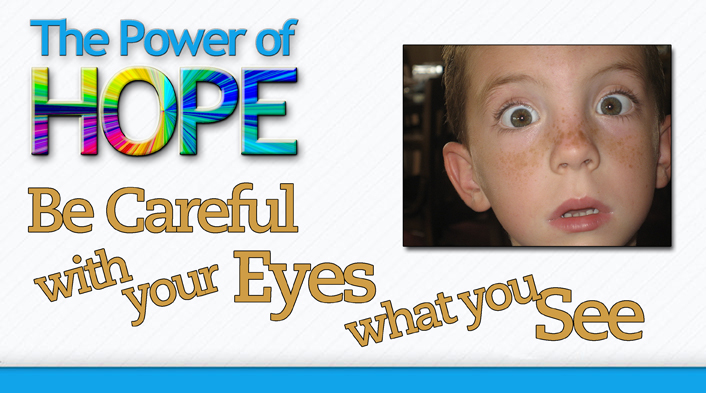 Last week, we talked about the ear gate and asked, “Is the Monkey at Your Gate?”  The eye is another gate through which information enters into our minds. While the ear gate is the primary gate God uses, we know that the eye gate is also used by God for His good will and purposes.

Proverbs 20:12 The hearing ear, and the seeing eye, the LORD hath made even both of them.

With the eye gate we take in all the beauty of God’s creation. From the mountains to the oceans, the stars to the shining sun, in the smile of a little baby and the eyes of a wise old man, our amazing God is revealed to us by what we see all around us in His amazing creation. The eyes are also the gate through which we can read the words of the Bible. Therefore, the eyes are of great importance—and yet, God clearly speaks of the ear gate as being the more important. Perhaps that is because the eye gate is the primary gate Satan uses to transmit his lies and deceptions. The “lust of the eyes” is one of the three categories of sins that have been controlling us ever since the fall of man in the Garden.

Notice that it’s not the lust of the ears. Of course, remember that what we hear can also influence the three categories of sin spoken of by the apostle John. But understand that the visual acuity of the eyes adds a dimension to desire and lust that hearing does not. It is through the eye gate that we “take in” the world around us and become extremely vulnerable to succumbing to sin. It’s been that way since the beginning. When Satan tempted Eve, he began his attempt to enter through the ear gate. He asked Eve, “Yea, hath God said, Ye shall not eat of every tree of the garden?” (Genesis 3:1) Eve did not succumb to his temptation through the ear gate, but instead responded with God’s words (albeit somewhat incorrectly). Satan tried again, and this time his temptation entered through the eye gate….and Eve ate of the forbidden fruit after first partaking with her eyes:

“when the woman saw that the tree was good for food, and that it was pleasant to the eyes, and a tree to be desired to make one wise, she took of the fruit thereof, and did eat, and gave also unto her husband with her; and he did eat.” (Genesis 3:6)

The lust of the eyes overcame Eve and she ate. And Adam ate. And they fell in disobedience from their relationship with God. Their eyes were opened and they now took in through the eye gate their fallen nature:

Genesis 3:7 And the eyes of them both were opened, and they knew that they were naked; and they sewed fig leaves together, and made themselves aprons.

We live in an age in which the worldly ways are increasingly entering our minds through the eye gate. Especially with TV and the Internet, the eye gate is flooded with images of things that oppose our God and contradict His teachings and purpose for our lives. I venture to say, it is becoming impossible to keep this gate closed from all the sin of the world that is placed before our eyes. We must remain ever diligent in guarding this gate.

Today people read less and they watch more. Illustrations, pictures and videos add to what we hear in our ears and make what enters into our minds seem to “come alive.” Sadly so many people are no longer satisfied with the simplicity of the written or spoken word alone—there has to be pictures or videos to catch their eye, focus their attention and keep their interest. Even when we listen to audio (e.g. the radio or an iPod), we are usually multitasking and bringing in a great deal of information through the eye gate simultaneously. 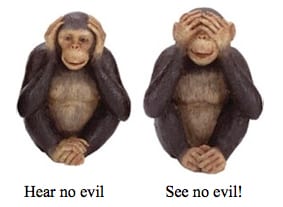 Last week we talked about the importance of guarding the ear gate. This week we can clearly see (pun intended) how we must guard the eye gate. Both of these gates must be guarded. Through each of these gates enters information that will either build us up and establish us in the Lord Jesus Christ, or will tear us down and wreck the foundation of our faith and lead us into sin. Know when to open the gates and know when to close them!

Read more about the monkeys and the gates in Hear, See, Speak & Post No Evil: A Practical Guide for Guarding the Mind