Good Tidings for the General Public & the Elderly 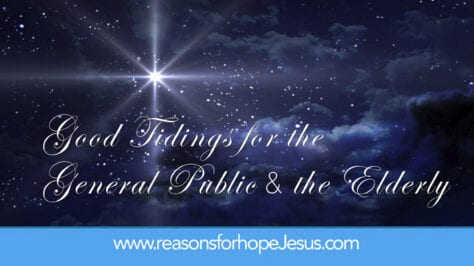 The gospel of Luke records that first Christmas night when God intervened in human history. And God did this in such a way that no one was left out.  These good tidings were for all men and all women (especially Joseph and Mary, Read: Good Tidings for All Men and Women), for all children and common people (Read: Good Tidings For All Children and Common People).  The good tidings were also for the general public and for the elderly.

Good Tidings for the General Public

Luke 2:17-18 Now when they [the shepherds] had seen Him, they made widely known the saying which was told them concerning this Child. And all those who heard marveled at those things which were told them by the shepherds.

As thrilled as the shepherds were in receiving these tidings from the mighty angels, and then seeing the Messiah with their owns eyes in the manger, they realized this wonderful news was not just for them.  So as they reverently departed from the nativity, the Bible says, “they made widely known” the news about the birth of Jesus, and Scripture tells that as they spread the word to everyone they met, “all those who heard marveled at those things” that the shepherds told them.

This good news is meant for everyone!  Though God had first revealed Jesus’ birth to those on the bottom rung of the social ladder, these good tidings must be given to every man, woman, and child of every color, creed, country, and social status.

We, like the shepherd of old, must be committed to sharing this Gospel to all people everywhere, in prisons or in palaces, in valleys or on mountaintops, in slums or in suburbs, in town or in rural areas, in jungles or in penthouses.

Unfortunately, there has been a sinister concerted effort to “suppress the truth” (Rom. 1:18) about God and His glorious person, power, and plan of salvation.  Many have noticed there is insidious secularism that has been spreading like cancer in our society for the last 75 years or so.

In the early ’60s, the Supreme Court ruled against prayer and Bible reading in public schools.  In the ’70s, they approved the “right to privacy” in the 14th Amendment that included the right to abortion. Then in the ’80s, homosexuality became open and accepted. Efforts were then made to redefine the family, and more recently gender confusion has risen up.  Along with this came “the war on Christmas.”  Nativity scenes and traditional Christmas carols were removed from the public square and schools quit calling it the Christmas break, instead preferring the winter or semester break.  And in some circumstances “under God” has been left out from our pledge of allegiance, and crosses have been removed from university chapels, public monuments, and even some church steeples or worship centers.

Many Americans have quietly accepted the gradual eroding of our freedom of religious expression.  This is a far cry from the spirit of that first Christmas!  The Shepherds had heard the angel’s directive.  They saw the infant Savior of the world with their own eyes.  Now they were motivated to tell everyone they met.  “They made widely known the saying which was told them concerning this Child.”

Good Tidings for the Elderly — Simeon and Anna

Luke 2:25-26  And, behold, there was a man in Jerusalem, whose name was Simeon; and the same man was just and devout, waiting for the consolation of Israel: and the Holy Ghost was upon him. And it was revealed unto him by the Holy Ghost, that he should not see death, before he had seen the Lord’s Christ.

Joseph and Mary, being devout Jews, brought Jesus to the temple about 40 days after His birth.  When Simeon saw Jesus, he took Jesus up in his arms and blessed God and said, “Lord, now You are letting Your servant depart in peace according to Your word; for my eyes have seen Your Salvation which You have prepared before the faces of all peoples, a light to bring revelation to the Gentiles, and the glory of Your people Israel.” (Luke 2:29-31)

What a wonderful saint Simeon was!  He was walking in faith, worshipping in the temple, and waiting for the Messiah to come. And God gave him the amazing privilege of seeing the Christ with his own eyes, and holding Him in his arms!

After Simeon prophesied, an elderly prophetess gave thanks to God for the baby Jesus:

Luke 2:36-38 Now there was one, Anna, a prophetess, the daughter of Phanuel of the tribe of Asher.  She was of a great age, and had lived with a husband seven years from her virginity; and this woman was a widow of about 84 years, who did not depart from the temple, but served God with fastings and prayers night and day. And coming in that instant she gave thanks to the Lord, and spoke of Him to all those who looked for redemption in Jerusalem.

Good Tidings for All

No one is left out of the Christmas story.  No one is disqualified or beyond the reach of the Christmas message.  God has made it abundantly clear that He means this to be… “Good tidings of great joy which will be to all people”.

Born to die that man might live, came to earth new life to give;
Born of Mary, born so low, many years ago.
God the Father gave His Son, gave His own beloved One;
to this wicked sinful earth, to bring mankind His love, new birth….

Ring the bells, Ring the bells! Let the whole world know;
Christ the Savior lives today, as He did so long ago!

…Born to die on Calvary, born to set His people free;
God Himself in human form- Tell it, Christ is born!
He has left His royal throne, He has come to claim His own;
Christ the Lord has come to earth, go spread the news of Jesus’ birth.

Ring the bells, ring the bells!  Let the whole world know;
Christ the Savior lives today, as He did so long ago!
(words and music by Harry Bollback, 1958)

Good Tidings for…
All Men and Women’
All Children and Common People
The General Public and the Elderly
Jews and Gentiles, the Rich, Wise, and Seekers of Truth