Good Tidings for All Men and Women 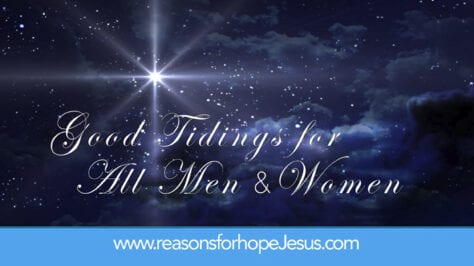 Good tidings started 2000 years ago when angels appeared to startled shepherds one night.

Luke 2:8-11“Now there were in the same country shepherds living out in the fields, keeping watch over their flock by night.  And behold an angel of the Lord stood before them, and the glory of the Lord shone around them, and they were greatly afraid.  Then the angel said to them, ‘Do not be afraid, for behold, I bring you good tidings of great joy which will be to all people.  For there is born to you this day in the city of David a Savior, who is Christ the Lord.’”

Good Tidings for All

Why is it that 2000 years later, people all over the world are still celebrating this? It’s because God’s angel clearly said that Christ’s birth would be good news of great joy for all people.

Luke 2:4… “Joseph also went up from Galilee, out of the city of Nazareth, into Judea to the city of David which is called Bethlehem, because he was of the house and lineage of David.”

The Christmas story begins with a man named Joseph.  We don’t know a lot about Joseph.  Scripture tells us that he was a descendant of David, lived in Nazareth, and was employed as a carpenter.  We also know that Joseph was chosen by God for a very special task.  Joseph was to be the husband of Mary and would share the responsibility of raising the Child who was the promised Messiah, who would ultimately be the Savior and bring salvation and eternal joy to all people.

Despite his high calling, Joseph was like the rest of us — a sinner in need of a Savior.  But he was also given the holy privilege of being Jesus’ human father to raise Him (Read: Did Jesus call Joseph Father?)

Joseph was Prepared by God

This was such a monumental, mind-bending task, that Joseph needed special preparation requiring divine revelation.  So God sent an angel to inform Joseph of his forthcoming privilege and responsibility.

Matthew 1:20-21… “an angel of the Lord appeared to him in a dream, saying, ‘Joseph, son of David, do not be afraid to take to you Mary your wife, for that which is conceived in her is of the Holy Spirit.  And she will bring forth a Son, and you shall call His name Jesus, for He will save His people from their sins.’”

Scripture goes on to tell us that Joseph was obedient to his divine instructions. He took Mary to be his wife, but was not intimate with her until after she had given birth to her firstborn Son, And Joseph called His name, Jesus (Mat 1:25).

So Jesus. the baby boy that Joseph was entrusted to raise, would grow up without ever once committing a sin. Jesus would be the sacrifice that would end all animal sacrifices in the temple. He would be the Lamb of God that came to take away the sin of the world. And He would make it possible for all who would repent and believe to have the forgiveness of sin and the gift of eternal life.

Joseph was Loving and Faithful

Joseph was a loving husband and a faithful father.  He and Mary would go on to have at least 6 other children (Mt. 13:55-56). But he was like any other man — a sinner in need of a Savior. Thank God, Jesus came for the express purpose to “save His people from their sins.”  This is good news, and it applied to all men, including Joseph.

Luke 2:5 “to be registered with Mary, his betrothed wife, who was with child.”

In Luke 2, we are introduced to one of the most beloved characters of the Christmas story. Mary was engaged to Joseph and was expecting a baby, This Child would be like no other, for He was conceived of the Holy Spirit. Mary also had been visited by an angel who informed her of the holy privilege and responsibility she was assigned by God.

Mary was Prepared by God

The angel, Gabriel, said to her…

Luke 1:26-35  “Rejoice, highly favored one, the Lord is with you; blessed are you among women!… Do not be afraid, Mary, for you have found favor with God, and behold, you will conceive in your womb and bring forth a Son, and shall call His name Jesus.  He will be great, and will be called the Son of the Highest; and the Lord God will give Him the throne of His father David… The Holy Spirit will come upon you, and the power of the Highest will overshadow you; therefore, also that Holy One who is to be born will be called the Son of God…”

Though Mary was a virgin and a fine Jewish girl, she was still a human being with a sinful nature.  She was given the enviable privilege of giving birth to the Messiah (the earnest desire of every devout Jewish woman). However, even though she would be the human mother of this holy Child, she herself would need Jesus to save her from her sins and grant her a spiritual birth into the family of God by grace through faith.  As was Joseph, Mary also was obedient to her heavenly assignment, and placed explicit faith in God, and in His Son.

Even before giving birth to Jesus, Mary expressed her faith:

Luke 1:47-50 “My soul magnifies the Lord, and my spirit has rejoiced in God my Savior.  For He has regarded the lowly estate of His maidservant; for behold, henceforth all generations will call me blessed.  For He who is mighty has done great things for me, and holy is His name, and His mercy is on those who fear Him from generation to generation.”

Mary’s humble words clearly indicate that she acknowledged she was a lowly sinner in need of a Savior.  She understood her privileged calling and trusted God to make her worthy of humanly giving birth to the Savior of the world.  Even before Jesus was born, Mary expressed her dependence upon the mercy of God and her reverential fear of God which would be an example to all generations to come.

So even though Mary was divinely chosen, highly favored, and greatly blessed, she like every other woman in the world, needed a Savior.  And the good news?

Luke 2:10-11 “Do not be afraid, for behold, I bring you good tidings of great joy which will be to all people. For there is born to you this day in the city of David, a Savior who is Christ the Lord.”

Yes indeed, these good tidings, this good news is for all men and all women.  And there is so much more we will see in future articles.

Gentle Mary laid her Child, lowly in a manger.
There He is the undefiled, to the world a stranger;
Such a Babe in such a place, can He be the Savior?
Ask the saved of every race, who have found His favor.

Gentle Mary laid her Child, lowly in a manger.
He is still the undefiled, but no more a stranger;
Son of God of humble birth, beautiful the story;
Praise His name in all the earth, Hail the King of Glory!
(Joseph Simpson Cook, 1919)

Good Tidings for…
All Men and Women’
All Children and Common People
The General Public and the Elderly
Jews and Gentiles, the Rich, Wise, and Seekers of Truth