Good Tidings for Jews and Gentiles, the Rich, the Wise, and Seekers of Truth 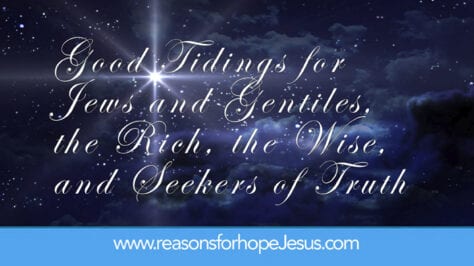 Luke 2:30-32   [Simeon said] “For my eyes have seen Your salvation which You have prepared before the face of all peoples; a light to bring revelation to the Gentiles, and the glory of Your people Israel.”

This is a prayer of praise from Simeon, a devout and faithful Jew.  Simeon spoke these words when He held the baby Jesus in his arms.

In the Abrahamic Covenant, God promised to make of Abraham a great nation, and bring forth the Messiah from them. The Messiah would then bless all the nations of the world.

While in bondage in Egypt, God protected the Israelites by bringing 10 Plagues on their oppressors. During the exodus and the Red Sea crossing, God protected them.  Then God miraculously provided for them during the wilderness wandering and battles. God made Israel into the world’s greatest empire during the reign of their first 3 kings (Saul, David, and Solomon).  And after 70 years of captivity in Babylon, God rescued them and granted spiritual revival under Ezra’s and Nehemiah’s leadership.

So after centuries of divine favor and watchful care, many Old Testament Jews thought they had a “corner on God.”  But while holding baby Jesus, Simeon, by the power of the Holy Spirit, reinforced the good tidings for all.   Simeon proclaimed that God had sent His Son to earth to bring salvation to the whole world (v.31), and that this gospel was for everyone, including both the Gentiles and Israelites (v. 32).

Good Tidings to All Nations

The earthly ministry of Jesus confirmed this.  Jesus told His disciples to take these good tidings to all nations (Mt. 28:18-20), to every creature (Mk. 16:15), to all the lost (Lk.19:10), to the whole world (Jn.1:29, 3:16), and to the ends of the earth (Acts 1:8).  The disciples were obedient to Christ’s great commission.  They bravely proclaimed the good news throughout Jerusalem, Judea and Samaria, and to the ends of the earth.  The Apostle Paul was chosen to be an apostle to the Gentiles.  He started churches in Gentile cities, and wrote letters to many churches, thereby fulfilling his divine calling (Acts 9:15).  There can be no doubt that the good tidings of Christmas are truly meant for all people, including Jews and Gentiles.

Good Tidings for the Rich, Wise, and Seekers of Truth

In Matthew’s Gospel, we read about the Magi.  They were Wise Men from the east (presumably Babylon). Guided by a special star, they journeyed to see the one who was born “King of the Jews.”  The gospel is truly “good tidings of great joy which will be to all people.”  Yes even to the rich, the wise, the powerful, and those we might call the “movers and shaker” of the world.

The apostle Paul referred to this in 1 Cor. 1:26, “not many wise…not many mighty, not many noble are called…”  Many rich and noble will not humble themselves and admit their need for forgiveness and eternal salvation. But praise God, some have…just as the Wise Men did long ago!  So it’s wonderful that God sovereignly included the story of the Wise Men in the Bible.

Good Tidings for ALL

This is marvelous, for we can boldly  proclaim the gospel to everyone, rich or poor, unknown or famous, powerful or weak, because we know these are “good tidings of great joy which will be to ALL people!”

John 3:16 has been called the gospel in a nutshell, and it says, “For God so loved the (whole) world, that He gave His only begotten Son, that whoever believes in Him should not perish, but have everlasting life.”  Even the wise, intelligent, academians can trust in the Savior!  Even the rich, noble, and powerful can humble themselves in sincere faith in Jesus.  Whoever is willing to repent from sin and receive God’s Son by faith can be redeemed.

Though the Gospel is exclusive, in that there is only one way to heaven (through Jesus), it is also inclusive.  The gospel is for everyone!  Anyone who is willing to hear and heed the gospel message can and will be given everlasting life.  It is free to us, but it was bought and paid for with the precious blood of Jesus.  We celebrate Jesus’ birth at Christmas, but we should remember that He was born to die.  Everything Jesus did and said during His 33 years on earth pointed to the cross. Jesus’ blood paid for the sins of the whole world.  But only those who trust in Him will enter into the Kingdom of God.

Never forget the divine message announced by the angel on that first Christmas night.  “Behold I bring you good tidings of great joy which will be to ALL people.” That means good tidings for men, women, children, the poor common folk, the general public, the elderly, Jews and Gentiles, and the wealthy, wise, and truth seekers.

The gospel is for all people.  Have you personally responded with humility and sincere faith?  If you haven’t yet, do it now!  If you are already a believer, then go, tell it to others!  Like the shepherds, let us be determined to make these good tidings widely known.  Let us be like the disciples of the early church who “went everywhere preaching the word” (Acts 8:4).  Let us be like the saints in Thessalonica of whom the apostle Paul wrote, ”For from you the word of the Lord has sounded forth, not only in Macedonia and Achaia, but also in every place. Your faith toward God has gone out so that we do not need to say anything,” (I Thes. 1:8).

The Story of Jesus

Good Tidings for…
All Men and Women
All Children and Common People
The General Public and the Elderly
Jews and Gentiles, the Rich, Wise, and Seekers of Truth