I Heard The Bells On Christmas Day – Story and Song Video (lyricist: Longfellow) 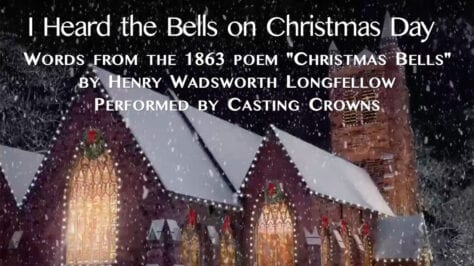 The words of the song “I Heard the Bells on Christmas Day” have a story behind them that might surprise you.

It was a time of war and Henry Wadsworth Longfellow was deeply disturbed by it all, the death and destruction. The carnage of the Civil War caused him great grief as he witnessed what his countrymen were doing to each other. What had become of this great country that his forefathers had worked so hard to establish?

After losing two wives, and now with this great Civil War, Longfellow, a renowned poet and writer, pondered the darkness that seemed so prevalent. On December 25th, 1863 his son lay in a hospital bed from war inflicted injuries.  And as he sat by his son’s bedside, Longfellow heard the church bells and penned the words to his great poem, “I Heard The Bells On Christmas Day.”

So troubled and in deep “despair,” Longfellow wrote of the canons that drowned out the message of the Christmas bells. His poem seemed to be headed toward a dark conclusion. But then . . . seemingly void of hope, he wrote,

“Then pealed the bells more loud and deep;
‘God is not dead, nor doth He sleep;
The wrong shall fail, the right prevail,
With peace on earth, goodwill to men.'”

Rescued from despair! For Longfellow’s realization was that “God is not dead!” The struggles of this world and the evils of it “shall fail” and God, who “doth not sleep,” His “right” shall “prevail.” And Henry Wadsworth Longfellow came to the conclusion that there will be “peace on earth, goodwill to men,” just as “the bells” declared/ He ended his poem with . . .

“Till ringing, singing on its way
The world revolved from night to day —
A voice, a chime, a chant sublime
Of peace on earth, goodwill to men!”

“[Jesus] was in the beginning with God. All things were made through Him, and without Him nothing was made that was made. In Him was life, and the life was the light of men. And the light shines in the darkness, and the darkness did not ‘overcome’ it.” (John 1:2-5)

Consider the Christmas message of hope . . . for though the world lies in darkness, He who is “the Light of the world” has come and neither the world, nor Satan, nor “the darkness” can “overpower” the work of God in Christ.

“God is not dead, nor doth He sleep.”

Pause to Hear the Bells