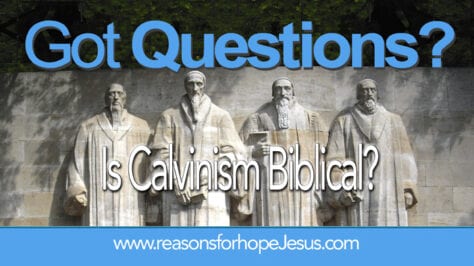 Calvinism is a theological explanation of biblical doctrines put forth by the followers of John Calvin (1509-1564). Therefore the real question becomes, are these teachings biblically supported?.

Before we give biblical support for our answer on this, let’s understand that there are many Christians who adhere to what Calvinism teaches.  Do not let this be divisive.  Stand firm on the core Christian doctrines of our faith (Read: What is IVDAR?  Core Christian Doctrines). On other teachings, share what the Bible says but be kind and gracious with those who have varying understandings.

This teaching says that man is totally unable to choose to trust God for salvation. It is also described as man being utterly perverse and unable to turn from sin and turn to God by his own volition.

This point claims that the saving grace of God is efficacious (effectually applied) only to those whom God has chosen. It further claims that the Holy Spirit will call sinners, whom God has chosen, and will reveal God in a way that they will be unable to resist God’s call and it will result in saving faith according to, and in fulfillment of, God’s election of that person. Irresistible grace denies any participation by the person (i.e. any choice or decision on the person’s part).

Perseverance of the Saints

This final point in the TULIP acronym teaches that those whom God has chosen to save cannot be separated from Him by anything or anyone in this world. This is the security of those who are in Christ, whom the apostle Paul refers to as saints (All who belong to Jesus are saints, This is not the same as sainthood earned by some people and bestowed on them by some denominations).

All five of these points of Calvinism hang on the doctrinal definition of Calvinistic election that some have been chosen for salvation by God but others have not. While there are many who believe this, we do not.  We believe these five points of Calvinism are not biblically supported. While they do magnify the sovereignty of God, they do not reflect the purpose and plan of God in creating man in His image. Nor does this selective election reflect the basic attributes of God, especially His love and grace.

The Bible clearly states that God sent His son into the world to pay the penalty for the sins of all mankind (John 3:16-17). The Bible also clearly tells that from the creation of Adam man was given a mind and a free will to choose God or to demonstrate turning from Him by disobeying His commands. This is a volitional choice — meaning acting from one’s will or desire. Just as God has a volitional will so also does man, who was created in his image. If God chooses who is saved (as according to Calvinism), then those whom He does not save cannot exercise a volitional will and seek God for salvation. That would contradict being born in God’s image (Read: What Does It Mean to Be Created in God’s Image?)

If Calvinism is true, it removes the volitional choice of those who are born but are not chosen by God for salvation. And that would deny the love of God for all people and refute His expressed will that all be saved and none should perish (2 Pet 3:9).

Jesus’ words supported this when He spoke of repentance unto life. He said, “except you repent, you all shall perish.” (Luke 13:3) If Calvinism is true, this cannot be a general statement for some would have no possibility of repenting and avoiding perishing.

Paul also spoke of salvation being available to “all men, everywhere” and not limited to only the select few.

Acts 17:30  “Truly, these times of ignorance God overlooked, but now commands all men everywhere to repent,  because He has appointed a day on which He will judge the world in righteousness by the Man whom He has ordained…”

And the author of Hebrews reminds us that Jesus died for all:

Heb 2:9  But we see Jesus, who was made a little lower than the angels for the suffering of death, crowned with glory and honour; that he by the grace of God should taste death for every man.

There are many fine Christians who hold to the doctrines of Calvinism. Do not let this become divisive. We can agree to disagree.  These five doctrinal points have been argued for centuries. Study the word of God and come to your own understandings based on His teachings and those whom He inspired to write Scripture. Be tolerant of those who hold different understandings than yourself, knowing that our great God of love desires that we reflect His image by showing love to others.

John 13:35  “By this all will know that you are My disciples, if you have love for one another.”

Salvation available to all people, everywhere, demonstrates and magnifies the amazing, abundant, unrestricted, and unrelenting love of God for those created in His image –all human beings.

The idea of God creating the soul of one baby, chosen, with the guarantee to grow up and be saved, and another soul created without any possibility of salvation and certain damnation does not fit with the character of our loving God. Because God is love, He loves unconditionally, not selectively. If He were to choose and love selectively, it would be partiality, which the Bible tells is not of God.

Acts 10:34-35  Then Peter opened his mouth and said: “In truth I perceive that God shows no partiality. But in every nation whoever fears Him and works righteousness is accepted by Him.”

All Means All and Every Means Every

This, therefore, is the inclusiveness of God — that he loves all people, everywhere. Jesus died that all may come to Him and be saved.

Therefore, as a ministry and as Bible readers, we reject Calvinism and embrace the loving gift of God, given to all people, and free will choice that makes us fully human yet created in his image.

Remember it is God who saves, who desires that all people be saved. There are many who do not know this loving God.

Do God’s will and share his love with all people, just as Jesus commanded and commissioned us to do. [Check out our Salvation Page]

Mat 28:19  Go ye therefore, and teach all nations, baptizing them in the name of the Father, and of the Son, and of the Holy Ghost:
Mark 16:15  And he said unto them, Go ye into all the world, and preach the gospel to every creature.
John 20:21  Then said Jesus to them again, Peace be unto you: as my Father hath sent me, even so send I you.

What are the Five Solas of the Reformation?
The Most Important Five Points for All Christians
What Is Election?
Is Faith to Believe a Gift from God? Given to Some But Not All?