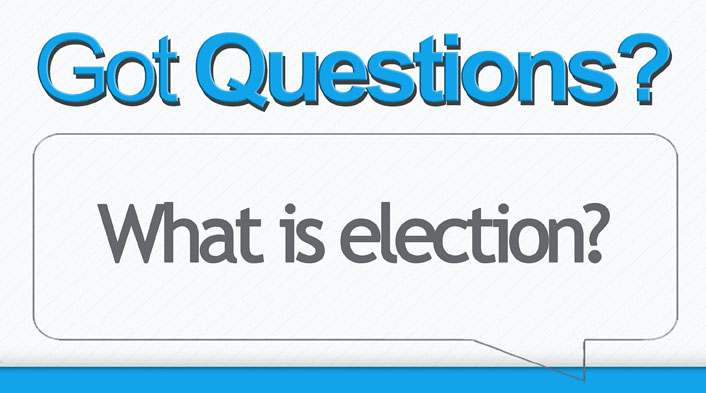 Election is a term for a doctrine (teaching) of salvation. The term is found only in the New Testament, but the doctrine is exemplified throughout the Bible.

Election is God’s selection of people or groups of people to receive His unmerited grace.  In the Old Testament, we see this in God’s choosing of a people (Israel), leaders and kings (Moses, David, et al.), messengers (prophets, et al.), etc.  All of the Old Testament “heroes” were chosen by God, raised-up and given unmerited grace to do His work.  The same is true in the New Testament before the cross (Mary, John the Baptist, et al.) and of course after the cross.  As blood-bought, Holy Spirit sealed believers we are called the elect of God.

Our standing as elect of God is not based on anything we do.  It is based solely on God’s purpose and His divine calling:

Romans 9:11  (For the children being not yet born, neither having done any good or evil, that the purpose of God according to election might stand, not of works, but of him that calleth;)

All Christians must agree that we have been elected, or chosen, by God.  So the question, “what is election?” is really about the various ways in which man understands God’s work in election.  We must begin our reasoning of this doctrine by remembering that it is God who does the electing.  It is His work, not ours.  Therefore, we can never fully understand how He has elected us, but we can know our election.

Remembering without ceasing your work of faith, and labour of love, and patience of hope in our Lord Jesus Christ, in the sight of God and our Father; Knowing, brethren beloved, your election of God. (1 Thessalonians 1:3-4)

The Doctrine of Election

There are two very different doctrines (teachings) of election in the church today.  They are referred to as conditional election and unconditional election.  They are sometimes called synergism and monergism, and are held by the theological doctrines of Arminianism and Calvinism respectively.  Although Arminianism and Calvinism encompass other biblical doctrines, this article will focus only on the two different views of the Doctrine of Election.

Conditional election is sometimes referred to as free will.  It is a belief that God elects people for salvation based on His foreknowledge.  This doctrine is defined by the Five Articles of the Remonstrance (1610)*, which were based on teachings from Jacobus Arminius (1560-1609), a Dutch theologian. Those who adhere to the teachings of Arminius are often called Arminians.

This theological understanding is based on God’s omniscience (He’s all knowing) and His omnipresence (He’s outside of our time dimension and is everywhere at all times) God knows who will repent and trust in Christ for the forgiveness of their sins. Therefore He elects (chooses) in His foreknowledge.

1 Peter 1:2  Elect according to the foreknowledge of God the Father, through sanctification of the Spirit, unto obedience and sprinkling of the blood of Jesus Christ: Grace unto you, and peace, be multiplied.

Because man has a free-will choice to respond to God’s provision for the forgiveness of sin, this definition of the Doctrine of Election is also called conditional election.  God has given man the ability to choose to surrender to Christ or to reject His gift of forgiveness and salvation.

Unconditional election is sometimes referred to as Sovereign Grace.  It is the belief that salvation is based on God’s choice alone.

John 15:16  Ye have not chosen me, but I have chosen you, and ordained you, that ye should go and bring forth fruit, and that your fruit should remain: that whatsoever ye shall ask of the Father in my name, he may give it you.

TULIP is an acronym used to represent the Five Points of Calvinism.  Election is represented by the “U” and stands for unconditional election.  It is followed by the “L,”  which stands for limited atonement (limited to the elect).  Those who adhere to the teachings of Calvinism are often called Calvinists.

Calvinists will also use the terms adoption by God, unmerited favor and Sovereign election in referring to the Doctrine of Election. However these terms are not exclusive to Calvinism, because Armenians also believe God adopts us, man does not deserve God’s grace and God is Sovereign.

The stumbling block that promotes divisiveness in the Doctrine of Election is the understanding of how much involvement the individual has in their salvation.  Did God choose to elect some people to be His and exclude others from any chance of becoming elect?  He is God and He has every right to do as He wills.

Calvinists will argue that God’s election is unconditional on the basis that God pre-determined if one would be elect.  Calvinists will often say, the only thing that man brings to his salvation is the sin that makes it necessary.

Arminians believe that God gave to all people a free-will choice to repent and trust in Christ, or to reject His provision for the forgiveness of their sins.  God’s election was based on His foreknowledge of who would do so.

Which One is Right?

That’s a question Christians can only answer after studying what the Bible teaches.  Many Christians don’t know what they believe about how they were elected by God.  Perhaps that’s a good thing because election is a hotly debated doctrine that can easily become divisive.  It is not necessary for salvation to understand this doctrine.  Nor is it necessary to preach this doctrine for any lost person to come to Christ.

It is, however, interesting for us to know and understand as much as we can about God and His work.  Our Lord has been gracious in revealing so much of Himself to us through His word and we should study to understand as best as we can.  Both Calvinists and Arminians use Bible verses to support their understandings.  Both will argue that the other’s verses are taken out of context or misused.  The two doctrines cannot be reconciled, so one should study to understand what God teaches and come to their own understanding guided by the Holy Spirit and God’s Word.

Whatever one’s understanding about this doctrine might be, we all must agree that election is the work of God—and there remains much mystery in exactly how God elects us.  We can never fully understand His work, and therefore the Doctrine of Election is probably incompletely and incorrectly understood (to some extent) by both theologies.  Study to understand what you can, and trust that God is good, just, merciful, gracious and loving in whatever way He elects His children.

Understanding that election is predestined from before the foundations of the earth, there’s a short prayer that I believe reflects how we should view election:

Lord, thank you for choosing me as one of the elect…

and please elect some more.

Did God choose us?  Yes!  And both Arminians and Calvinists agree on that.

Study the issue further, but do not let this become divisive with Christians who believe the alternate doctrine.

Remember it is God who does the electing.  It is His work, not ours.  So let us stay focused on our work…sharing the gospel of saving grace with those who do not know Jesus and being a light in a dark world, by loving and serving God and our neighbors and thereby reflecting His goodness and glory.

In addition to the Five Articles of the Remonstrance and the Five Points of Calvinism, there is another Five Points theology that is often overlooked.  It’s not a version of either of the two discussed in this article.  It’s a completely different Five Points.  Can you guess what the Five Points might be?

Read this Power of Hope article to learn the Five Points that I believe all Christians should be able to agree with and affirm!

*Arminianism / The Five Articles of Remonstrance:
1. election (and condemnation on the day of judgment) was conditioned by the rational faith or nonfaith of man;
2. the Atonement, while qualitatively adequate for all men, is efficacious only for the man of faith;
3. unaided by the Holy Spirit, no person is able to respond to God’s will;
4. grace is resistible; and
5.  believers are able to resist sin but are not beyond the possibility of falling from grace.
**Calvinism / The Five Points of Calvinism / TULIP:
Total Depravity (also known as Total Inability and Original Sin)
Unconditional Election
Limited Atonement (also known as Particular Atonement)
Irresistible Grace
Perseverance of the Saints (also known as Once Saved Always Saved)
If You Do NOT Know Jesus, Click NOW!