How Many Times Did God Send Fire from Heaven? 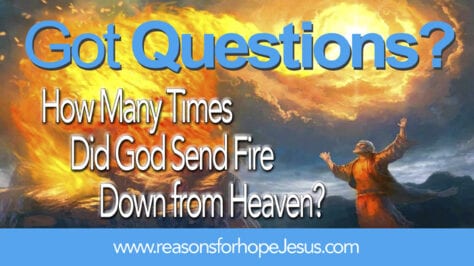 God sent fire from Heaven every time a sacrifice was consumed.  However, in the Old Testament, there are at least seven very significant recorded occurrences of fire from Heaven:

Fire from Heaven in the New Testament

There is no record of fire being sent from Heaven by God in the gospels and the writings of Paul and the other apostles.  However, James and John asked Jesus to call down fire from Heaven to consume a Samaritan village that had not received Him (Luke 9:52-54). But it was not Jesus’ will to judge the people of the city with fire. He told His disciples, “…the Son of man is not come to destroy men’s lives, but to save them…” (Luke 9:56)

In Acts, we read of the Holy Spirit coming down from Heaven and appearing as cloven tongues of fire, but this fire did not consume.  “…it sat upon each of them. And they were all filled with the Holy Spirit…” (Acts 2:3-4). The Holy Spirit is not fire.  He only appeared “as” fire.

Fire from Heaven — yet to come!

During the seventieth week of Daniel (The Tribulation), the false prophet will “make fire come down from heaven on the earth in the sight of men” (Rev 13:13), but this is not sent from Heaven by God. This is the power of Satan copying God’s fire from Heaven.

Fire from Heaven will come down again one last time.  Following the millennial reign of Christ, when Satan is loosed, the nations are deceived, and Satan gathers followers to battle against God, then God will send fire to devour Satan and his troops.

Rev 20:9  And they [Satan and his troops] went up on the breadth of the earth, and compassed the camp of the saints about, and the beloved city [Jerusalem]: and fire came down from God out of heaven, and devoured them.

Love Came Down from Heaven

Yes, God did send fire from Heaven in judgment.  But God also sent Love from Heaven when He sent Jesus. The Gospel of John tells us: