Is Faith to Believe a Gift from God? Given to Some But Not All? 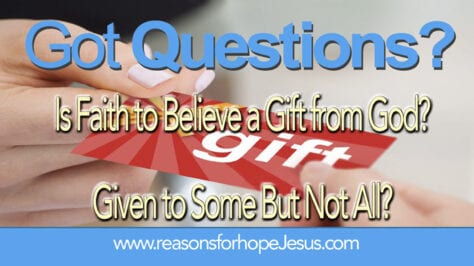 Some Christians say that the faith needed to believe in Jesus is a gift from God. Jonathan Edwards, an 18th-century Presbyterian preacher and theologian, is quoted as having said, “You contribute nothing to your salvation except the sin that made it necessary.” Many have repeated his words as a way to support the idea that we are not able to be saved unless God gives us the faith to believe. But is that true?  Does God give saving faith? And does that mean He gives it to some and not to others?

Ephesians 2:8 is often used to support the idea that faith to believe is God-given:  For by grace are ye saved through faith; and that not of yourselves: it is the gift of God.

It should be noted that most who believe God gives people the faith to believe unto salvation hold to a Calvinism teaching on the doctrine of election (Read: What is Election?). Calvinism teaches that God “elects”  (chooses) those whom He will save; and therefore, He chooses to whom He will give saving faith.

Election, according to Calvinism, is also referred to as monergism. That means only one person (God) is involved in the salvation of man.  Reflecting on Jonathan Edward’s statement (he was a Calvinist), Calvinists say that man has absolutely nothing to bring to his salvation, therefore even the faith to believe must be given by God. Calvinists believe that since God has chosen those whom He will save, He will give them the faith they need to believe and, at some point in their lives, they will believe in Jesus.

On the other hand, synergism is the belief that man must make a free-will choice to repent and trust in Jesus. Then, as a result of that choice, God’s saving grace is received. Synergists hold that while God offers His saving grace to all people, He will not force anyone to take His free gift of saving grace.  Therefore, it is through one’s personal faith that one must choose to believe or choose to not believe. Synergism says faith is a free-will, personal decision, resulting from a progression of three things: 1.received knowledge, 2. intellectual belief, and 3.heart-felt trust (Read: What is Faith? How do I get it? How do I grow it?).

Monergism refutes synergism by saying: if faith is not given to man as a gift from God, then it is a work of man to repent and trust in Christ and no one is saved by any kind of works. This is not biblically supported. While it is true that no one is saved by their works, choosing to repent and trust in Jesus is not a work. It is a reasoned choice that comes from the heart and the mind. It is a response to the revelation of who Jesus is and what He has done, And it reflects an understanding of one’s personal need for a Saviour.

Synergism refutes monergism saying: if God must give sinners the faith to believe, then He must choose to give it to some and withhold it from others. That would be in opposition to God’s attribute of being just (Rom 3:26). And, it would be in conflict with His revealed desire that all be saved (2 Pet 3:9). God is just and God loves the whole world. Therefore, everyone must have an opportunity to make a free-will choice to trust in Jesus and be saved.

It’s not the faith to believe that is given by God, it’s the knowledge needed to choose to believe that God gives. He gives it through the revelation of who He is and what He has done.  And again, He give it to all, so all can make an informed and conscious choice to believe or to not believe.

How Does God Increase Our Faith in Sanctification?

After justification comes sanctification, which is the process of growing in faith and living the Christian life. (Read What you need to know about Sanctification & Glorification). In a believer’s sanctification journey, God increases one’s faith in the same way that He fueled their ability to make an informed choice to believe.  God increases faith by revealing more of Himself through His creation and His Word. But even in sanctification believers have a free-will choice.  They choose to receive the knowledge God reveals, believe the knowledge they have received, and then trust in what they know and believe, or they choose to suppress or reject it.

God has freely graced all people of all times and in all places with the sufficient knowledge needed to make a free-will choice to believe and trust. Even those who have never heard the name of Jesus can “see” Him (have knowledge of Him) by the revelation God has given in creation (Ro 1:19-20). So all are without excuse.  Share the knowledge of who Jesus is and what He has done with all people.

Read also:
Faith is Made Up of Three Things, by Charles Spurgeon
Is Faith to Believe a Gift from God? Given to Some But Not All?
Faith, Hope, and Love — Why is Love the Greatest?
What is Faith? How do I get it? How do I grow it?
Ways to Glorify God - Bookmark
What does it mean to live your life as a testimony for Jesus? 3 Steps!