Was Mary a Levite, making Jesus both King and Priest? 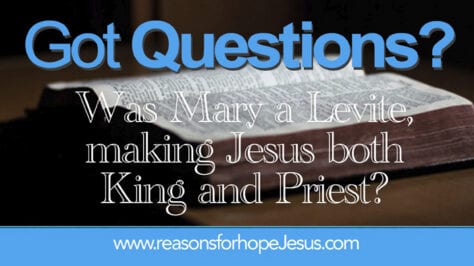 Was Mary a Levite because she was Elizabeth’s cousin?  Does that mean that Jesus was from both tribes — Judah and Levite — thereby making Him both King and Priest?

Let’s start with what we know:

Luke 1:5  There was in the days of Herod, the king of Judaea, a certain priest named Zacharias, of the course of Abia: and his wife was of the daughters of Aaron, and her name was Elisabeth.

Since Mary was Elizabeth’s cousin, and Elizabeth was a Levite, does that make Mary a Levite?  The answer is, no.

Mary Was Not a Levite

In ancient Israel, tribal affiliation came through the father and Mary’s father was from the tribe of Judah. In Luke 3 we have Mary’s genealogy that traces her lineage through her father, Heli, back through King David, back to Judah, the fourth son of Jacob, and all the way back to Adam.

You might be wondering why the text of Luke 3:23-31 lists Joseph.  So how is this genealogy actually Mary’s bloodline? It is!  And it’s explained in these articles:  Why are there two different genealogies for Jesus? and The Blood Curse of Jeconiah.

Since Mary’s father was from the tribe of Judah, so was Mary.

So how were Mary and Elizabeth cousins?

Jesus Was Not a Levite

Again, tribal affiliation was determined through the father, and Jesus’ legal father, Joseph, was from the tribe of Judah.

Furthermore, we must remember that Jesus’ priesthood was (and still is) not of the Levitical priesthood of Aaron.  Jesus is “a high priest after the order of Melchizedek.” (Hebrews 5:8-10).

In His earthly incarnation and ministry, Jesus did not come to be King or to be Priest. He came in the office of Prophet, as prophesied (Deut 18:15, Acts 3:22).

Jesus came to preach “the acceptable year of the Lord” (Luke 4:18-19). And yet, in His final days, He also performed priestlty works, offering Himself as the Lamb of God (John 1:29) to take away man’s sin and to fulfill God’s purpose and plan of redemption.  Additionally, when He rose from the dead and ascended to the Father, He was crowned with glory and He became reigning King of a new kingdom, a spirtual kingdom, the Kingdom of God on earth..

One day Jesus will completely fulfill His offices as Prophet, Priest, and King. One day He will come again in glory to reign and rule on earth, sitting on the throne of David in Jerusalem, just as the angel told Mary (Luke 1:32)..  He will speak God’s truths to the people and will be their mediator until the final judgment when all things are judged and all is made new.  Then the perfect state of eternity will begin with Jesus as the Light of the New Heaven and New Earth.

We do not know, for certain, the relationship that made Elizabeth and Mary cousins, because the Bible does not tell us.  But we do that that they were cousins because of Luke 1:36.  We also know that Jesus was born into the Tribe of Judah.  He came to earth and lived and taught as the Perfect Prophet of prophets (Deuteronomy 18:15, 18, Matthew 13:57, Luke 24:19). Since His ascension back to Heaven, Jesus now reigns in the hearts of all who are His. He is the Loving Lord of lords and He intercedes as our High Priest (Hebrews 5:5-10, Hebrews 7). making Him the Righteous Priest above all priests.  And, one day Jesus will come again in all His glory to live and reign as the Eternal King of kings.  He will sit on the throne of David and all the earth will know of His righteousness.

Revelation 11:15  And the seventh angel sounded; and there were great voices in heaven, saying, The kingdoms of this world are become the kingdoms of our Lord, and of his Christ; and he shall reign forever and ever.

Psalm 72:19  And blessed be his glorious name for ever: and let the whole earth be filled with his glory; Amen, and Amen.