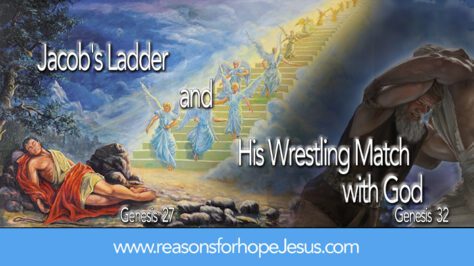 As we end our study of the life and faith of Abraham and his descendants, Isaac and Jacob, it wouldn’t be complete without reviewing two very significant events in the life of Jacob.

The Way to God

10 And Jacob went out from Beersheba, and went toward Haran.  11 And he lighted upon a certain place, and tarried there all night, because the sun was set; and he took of the stones of that place, and put them for his pillows, and lay down in that place to sleep. 12 And he dreamed, and behold a ladder set up on the earth, and the top of it reached to heaven: and behold the angels of God ascending and descending on it.

Described as a ladder, this was really more like a stairway.  Symbolically, the ladder/stairway foreshadowed Christ who would span the gulf between man and God.  Jesus confirmed this when He said: “…Verily, verily, I say unto you, Hereafter ye shall see heaven open, and the angels of God ascending and descending upon the Son of man.” (John 1:51).  Jesus is the way to the Father in Heaven.

In his dream, Jacob saw the LORD God of his fathers and he heard God’s voice:

13 And, behold, the Lord stood above it, and said, I am the Lord God of Abraham thy father, and the God of Isaac: the land whereon thou liest, to thee will I give it, and to thy seed; 14 And thy seed shall be as the dust of the earth, and thou shalt spread abroad to the west, and to the east, and to the north, and to the south: and in thee and in thy seed shall all the families of the earth be blessed.  15 And, behold, I am with thee, and will keep thee in all places whither thou goest, and will bring thee again into this land; for I will not leave thee, until I have done that which I have spoken to thee of.

In the dream, God reconfirmed the covenant He had made with Abraham — the covenant that had been passed down to Isaac and now to Jacob (vv. 13–15).  It was here that Jacob’s faith was made strong.  God was preparing Jacob according to His purpose and plan to bring about a nation of people, separated from the world, devoted to serving Him, and ready to receive their messiah

16  And Jacob awaked out of his sleep, and he said, Surely the LORD is in this place; and I knew it not. 17 And he was afraid, and said, How dreadful is this place! this is none other but the house of God, and this is the gate of heaven. 18 And Jacob rose up early in the morning, and took the stone that he had put for his pillows, and set it up for a pillar, and poured oil upon the top of it. 19 And he called the name of that place Bethel…

Many years later, after going to the house of Laban, after taking wives Leah and Rebekah, Jacob and his family departed from Laban’s house.

1 So Jacob went on his way, and the angels of God met him.  2 When Jacob saw them, he said, “This is God’s camp.” And he called the name of that place Mahanaim.

Let’s jump forward to the most significant event in Jacob’s life.  The night that he encountered the Almighty God and was broken, making his usable by God for His purpose and plan.

24  Then Jacob was left alone; and a Man wrestled with him until the breaking of day.  25 Now when He saw that He did not prevail against him, He touched the socket of his hip; and the socket of Jacob’s hip was out of joint as He wrestled with him. 26 And He said, “Let Me go, for the day breaks.” But he said, “I will not let You go unless You bless me!” 27 So He said to him, “What is your name?” He said, “Jacob.”  28 And He said, “Your name shall no longer be called Jacob, but Israel; for you have struggled with God and with men, and have prevailed.”

Jacob was in his 90s when he wrestled with God.  God allowed him to prevail through the dark of night, but in the light of day, God broke him. He touched the socket of his hip and changed his name from Jacob, meaning supplanter, to Israel, which means may God prevail.

Just as God had changed the names of Abram and Sarai, He changed Jacob’s name.  Just as Abraham and Sarah were a new creation, prepared for God’s service, Israel was being prepared to serve his God.  Israel would be Jacob’s covenantal name, and he would become the father of the nation, according to God’s perfect purpose and plan.

30 And Jacob called the name of the place Peniel: “For I have seen God face to face, and my life is preserved.”

Now read a short devotional lesson based on this event in the life of Jacob. It was written many years ago by a Christian who is now among the Great Cloud of Witnesses (Heb 12:1).  Her words live on and her love of God is a testimony to all who desire to know God better.

And Jacob was left alone, and there wrestled a man with him until the breaking of the day (Genesis 32:24).

In this passage, God is wrestling with Jacob more than Jacob is wrestling with God. The “man” referred to here is the Son of Man—the Angel of the Covenant. It was God in human form, pressing down on Jacob to press his old life from him. And by daybreak God had prevailed, for Jacob’s “hip was wrenched” (v. 25).

As Jacob “fell” from his old life, he fell into the arms of God, cling- ing to Him but also wrestling until his blessing came. His blessing was that of a new life, so he rose from the earthly to the heavenly, the human to the divine, and the natural to the supernatural. From that morning forward, he was a weak and broken man from a human perspective, but God was there. And the Lord’s heavenly voice proclaimed, “Your name will no longer be Jacob, but Israel, because you have struggled with God and with men and have overcome” (v. 28).

Your Time of Crisis

Beloved, this should be a typical scene in the life of everyone who has been transformed. If God has called us to His highest and best, each of us will have a time of crisis, when all our resources will fail, and when we face either ruin or something better than we have ever dreamed. But before we can receive the blessing, we must rely on God’s infinite help. We must be willing to let go, surrendering completely to Him, and cease from our own wisdom, strength, and righteousness. We must be “crucified with Christ” (Gal. 2:20) and yet alive in Him. God knows how to lead us to the point of crisis, and He knows how to lead us through it.

Is God leading you in this way? Is this the meaning of your mysterious trial, your difficult circumstances, your impossible situation, or that trying place you cannot seem to move past without Him? But do you have enough of Him to win the victory?

There is no way out of your difficult and narrow situation except at the top. You must win deliverance by rising higher, coming into a new experience with God. And may it bring you into all that is meant by the revelation of “the Mighty One of Jacob” (Isa. 60:16)!

There is no way out but God.

At Your feet, I fall,
Yield You up my ALL,
TO SUFFER, LIVE, OR DIE
For my Lord crucified.