Abraham Pleaded for Mercy for Sodom and Gomorrah 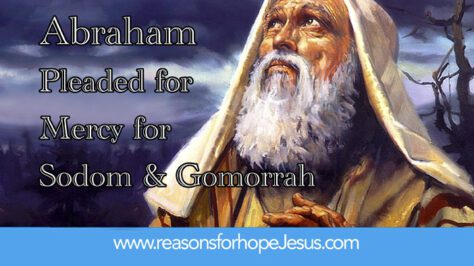 In Genesis 18:1-15 we read of three men visiting Abraham and Sarah at the oaks of Mamre.  One of the three men was the Lord Himself.

16And the men rose up from thence and looked toward Sodom: and Abraham went with them to bring them on the way.  17 And the Lord said, Shall I hide from Abraham that thing which I do; 18 Seeing that Abraham shall surely become a great and mighty nation, and all the nations of the earth shall be blessed in him? 19 For I know him, that he will command his children and his household after him, and they shall keep the way of the Lord, to do justice and judgment; that the Lord may bring upon Abraham that which he hath spoken of him.

20And the Lord said, Because the cry of Sodom and Gomorrah is great, and because their sin is very grievous; 21I will go down now, and see whether they have done altogether according to the cry of it, which is come unto me; and if not, I will know.

This final exchange between the LORD and Abraham revealed that God was on His way to bring judgment upon the great cities of Sodom and Gomorrah.  He explained that there were grievous outcries before His Throne about the depths of their wickedness.  He explained that He intended to go and search the hearts of the inhabitants to determine what their fate should then be.

Abraham knew that his nephew Lot had returned to Sodom and in spite of the fact that Lot hadn’t been such a good person to Abraham, it was clear Abraham still loved him and was worried about him.  So Abraham gently and reverently engaged in a negotiation with God.

22 And the men turned their faces from thence, and went toward Sodom: but Abraham stood yet before the Lord.  23 And Abraham drew near, and said, Wilt thou also destroy the righteous with the wicked?

27 And Abraham answered and said, Behold now, I have taken upon me to speak unto the Lord, which am but dust and ashes: 28 Peradventure there shall lack five of the fifty righteous: wilt thou destroy all the city for lack of five? And he said, If I find there forty and five, I will not destroy it.29 And he spake unto him yet again, and said, Peradventure there shall be forty found there. And he said, I will not do it for forty’s sake.

God’s love and mercy are displayed in response to Abraham’s pleading for the cities of Sodom and Gomorrah. If there were only 10 just and decent men, God agreed He would spare both cities and all who lived therein.  This ended the Lord’s conversation with Abraham:

33 And the Lord went his way, as soon as he had left communing with Abraham: and Abraham returned unto his place.

We are to understand that

We are to have faith in God.  But when there is no faith, and rather only unmovable, unchangeable disbelief in God’s love and grace, self-inflicted destruction happens.  Note that at times, Abraham had doubts. And Sarah had just laughed at what God said He was about to do. Yet no wrath or destruction befell either.  Why?  Because God’s mercy is freely given to those whose heart is right.