Lot and His Daughters 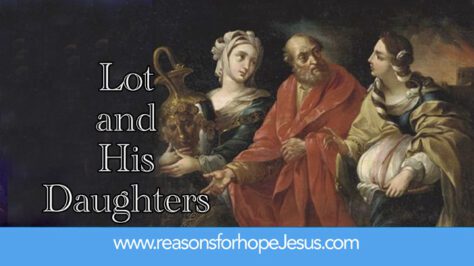 The last section of Chapter 19 (verses 30-38) dealt with the destiny of Lot and his two unmarried daughters (his wife looked back and became a pillar of salt, Gen 19:26). Recall that the angels had instructed them to go to the mountains for safety, but Lot begged to be allowed to escape to a small village called Zoar.  The angels permitted it and Lot and his daughters fled there. However, it wasn’t long before Lot realized the mountains were indeed a better place.  So, Lot left Zoar and took his daughters to a cave in the mountains, and there they hid there in complete isolation.

While living this isolated life in the cave, Lot’s daughters began to reason that they would never find husbands and would not have children to perpetuate their father’s line.  So they plotted to get their father drunk and have intercourse with him.  Both conceived and bore sons.  The older daughter named her son Moab. His descendants became the Moabites. The younger daughter named her son Benammi. His descendants became the Ammonites. In later generations, the Moabites and Ammonites would become constant and bitter enemies of the Jews.

Lot’s wife did not trust the Lord and keep His command not to look back.  Nor did his daughters, whose actions were sinful.  Again, we see people who believed IN God but didn’t have the faith to BELIEVE GOD. They didn’t trust God enough to wait on Him and they took action by their will and in their ways.

Genesis 20 is a similar story of failure.  Only this time the failure is an inexplicable repeat of previous mistakes by Abraham and Sarah.  Having journeyed south, Abraham and Sarah came to Gerar, a Philistine city, under the rule of King Abimelech. Once again, Abraham said that Sarah was his sister.  So Abimelech took Sarah.  But God intervened, just as He did with Pharaoh.  God caused King Abimelech to have a dream that revealed Sarah was indeed Abraham’s wife.

But God came to Abimelech in a dream by night, and said to him, Behold, thou art but a dead man, for the woman which thou hast taken; for she is a man’s wife. But Abimelech had not come near her: and he said, Lord, wilt thou slay also a righteous nation?  Said he not unto me, She is my sister? and she, even she herself said, He is my brother: in the integrity of my heart and innocency of my hands have I done this.  And God said unto him in a dream, Yea, I know that thou didst this in the integrity of thy heart; for I also withheld thee from sinning against me: therefore suffered I thee not to touch her.

Now therefore, restore the man his wife; for he is a prophet, and he shall pray for thee, and thou shalt live: and if thou restore her not, know thou that thou shalt surely die, thou, and all that are thine.  Therefore Abimelech rose early in the morning, and called all his servants, and told all these things in their ears: and the men were sore afraid.

Just as Pharaoh did, Abimelech called Abraham and sent him and Sarah on their way.  Additionally, Abimelech  gave Abraham money, livestock, and permission to dwell in his land:

And Abimelech took sheep, and oxen, and menservants, and womenservants, and gave them unto Abraham, and restored him Sarah his wife, and Abimelech said, Behold, my land is before thee: dwell where it pleaseth thee.  And unto Sarah he said, Behold, I have given thy brother a thousand pieces of silver: behold, he is to thee a covering of the eyes, unto all that are with thee, and with all other: thus she was reproved.

God was gracious unto the house of Abimelech, reversing His judgment on them:

So Abraham prayed unto God: and God healed Abimelech, and his wife, and his maidservants; and they bare children.  For the LORD had fast closed up all the wombs of the house of Abimelech, because of Sarah Abraham’s wife.

This was an act of mercy and grace of God given to a nation and in accordance the covenantal promise in Gen 12:3

And I will bless them that bless thee, and curse him that curses thee: and in thee shall all families of the earth be blessed.

A Lesson for Us

So what are we to learn from Abraham and Sarah’s repetition of a previous breach of trust in God?   They repeated the same sin of lying because they did not trust God to protect them. And once again, God intervened to preserve them and the future line of the promised seed.  From this, they learned (and we can, too) that what God has promised will come to pass.

As we will see in Chapters 21 and 22, God’s assessment was perfect in both event and outcome.  Abraham and Sarah had then been made ready to surrender all to God and to trust fully in Him.  And God poured out His blessings on them: