Abraham — The Battle of Siddim 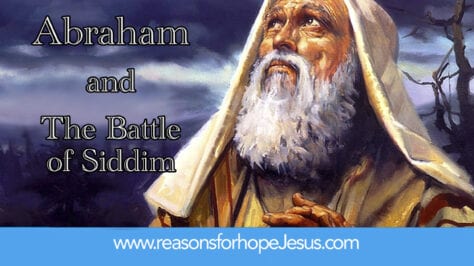 We’re studying the life and faith of Abraham.  If you missed earlier lessons, they are listed at the end of this lesson.

1 And it came to pass in the days of Amraphel king of Shinar, Arioch king of Ellasar, Chedorlaomer king of Elam, and Tidal king of nations;  2 That these made war with Bera king of Sodom, and with Birsha king of Gomorrah, Shinab king of Admah, and Shemeber king of Zeboiim, and the king of Bela, which is Zoar.  3 All these were joined together in the vale of Siddim, which is the salt sea.

4 Twelve years they served Chedorlaomer, and in the thirteenth year, they rebelled.  5 And in the fourteenth year came Chedorlaomer, and the kings that were with him, and smote the Rephaims in Ashteroth Karnaim, and the Zuzims in Ham, and the Emins in Shaveh Kiriathaim, 6 and the Horites in their mount Seir, unto Elparan, which is by the wilderness.  7 And they returned, and came to Enmishpat, which is Kadesh, and smote all the country of the Amalekites, and also the Amorites, that dwelt in Hazezontamar.

Two thousand years ago, most kingdoms were city-states (cities wherein the occupants pulled together, built defenses, and created a militia-type army for protection).  On occasion, these city-state kingdoms would form alliances with other similar kingdoms and attempt to seize lands that might extend their borders, thereby adding important natural resources.  The armies of these kingdoms were usually no more than a few hundred men. Only rarely would armies number in the thousands.

A few years after Lot and Abram had separated, four kings formed an alliance.  The Bible often uses the term “confederacy” for these loose alliances. Confederacy signifies that their joining together was temporary. It was for a unique purpose and was not a merger of multiple kingdoms under a single king.

In this particular alliance, three of the four kings were from cities in Babylon, which is modern-day Iraq: Shinar, Ellasar, and Goiim (means “nations”).   The fourth king was from the city of Elam, a large city in Persia, which is modern-day Iran.  The temporary purpose of this alliance was to raid nearby cities, seize their possessions, and take their peoples into captivity as slaves.  It’s likely they had determined a way to divide up the spoils of their raids before they went to war.

These four kings were the aggressors and they were ruthless. The most powerful and influential leader of the four kings was Chederlaomer, the King of Elam (Persia/Iraq).  History tells us that these four aggressor kings swept across the middle-east and sacked many cities in their wake.

In the Valley of Siddim

The kings of these five cities formed their own confederacy to defend themselves.  But even though it was five cities against four, they proved no match.    In a short time, the cities of Sodom and Gomorrah both fell. The five kings and their respective armies found themselves fleeing from the four kings.  And as they fled, the four kings pillaged the cities, raped the women, and carried off many people to a life of slavery.

This was the way of life in ancient times. When a city came under the threat of attack, it could choose to pay a “ransom” to the invaders and be spared going to war. Or the city could choose to refuse the ransom and meet the invaders on the battlefield.  But if the war was lost, the king and people of the city lost everything and became slaves to the conquerors.  History tells that the stakes were so high that it was common to decide to avoid war and pay the ransom.

For 13 years, the five kings must have paid the ransom to live in peace.  But apparently in the 14th year, they decided to go to war. And when the four kings conquered the five kings, the cities fell.

Among the spoils that the four kings seized was Lot, all his possessions, and his family.  Important to remember is that Lot had taken up residence in Sodom, thinking he could “stay separate” from the wickedness in the city.   However, man cannot live among the wicked and ungodly and still stay separate from such influences.  If one walks in filth, one will get filthy. The Bible says, “Choose your friends wisely” (Prov 13:20) and it gives this counsel for good reason.

Let’s now consider how Abram responded to the capture of his nephew and the idea that his nephew would be a slave in a foreign land that did not know his God.

And there came one that had escaped, and told Abram the Hebrew; for he dwelt in the plain of Mamre the Amorite, brother of Eshcol, and brother of Aner: and these were confederate with Abram.  14 And when Abram heard that his brother was taken captive, he armed his trained servants, born in his own house, three hundred and eighteen, and pursued them unto Dan.  15 And he divided himself against them, he and his servants, by night, and smote them, and pursued them unto Hobah, which is on the left hand of Damascus.  16 And he brought back all the goods, and also brought again his brother Lot, and his goods, and the women also, and the people.

We suppose that Abram and his confederacy, which numbered 318, was a much smaller force than that of the four kings (although the Bible does not tell this).  In spite of only having 318 men with him, Abram smote the four kings.  In doing so, he saved Lot,  his goods, the women, and all the people.  Abram’s victory was a gift from God.  Vastly outnumbered, Abram fought on faith and God rewarded his faith with victory.

To the Victor Go the Spoils

As the victor, Abram was entitled to share in the spoils with the Amorites.  In fact, as the leader and chief strategist, he was likely entitled to the “lion’s share.”  But Abram knew that the victory was God’s. So Abram rejected his share of the spoils from the four kings and asked only for that which had been unjustly seized from the five cities when the kings had conquered and pillaged then.

This indicates that Abram was not looking to gain anything. Abram returned all that he received to Sodom.  He did not want to use what God had done for him to gain personal reward.   In faith, Abram desired to be a servant to do the will of God, not a king who would profit from something God had done.