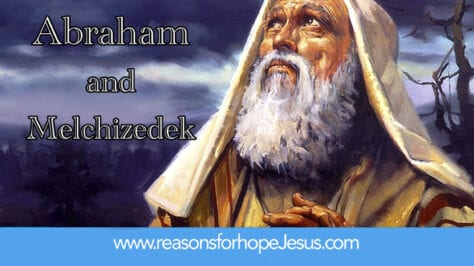 We’re looking at the life and faith of Abraham.  In case you missed earlier lessons, there’s a listing of them at the end of this lesson.

In our last study (Abraham and the Battle of Siddim), we read about Abram defeating the four king confederacy that had just sacked Sodom and Gomorrah.  Recall that these four kings, led by Chedorlaomer of Elam (Persia/Iran), had crushed Sodom and Gomorrah, seized all of the cities’ possessions, and taken all of the able bodied people as captives/slaves.  Among the people taken captive were Lot and his entire household.  So Abram set out to rescue Lot.  And though hopelessly outnumbered, he routed the four kings, liberated all of the captives (including Lot), and returned all of the possessions that had been taken from them.

After that, Abram met with the five other kings that he had just avenged.  The normal rules of warfare dictated that Abram was entitled to keep all of the spoils (possessions), but Abram knew his victory was God’s doing, not his own.  Therefore, He reasoned that he would display his understanding of this being God’s triumph by refusing to take any of the spoils (i.e., none of the due credit).

As Abram was returning from his huge victory, the grateful king of Sodom rushed out to meet him in order to express his gratitude.  When the king of Sodom arrived, he found that another king, Melchizedek, the King of Salem, was already with Abram.

Melchizedek, the King of Salem

The name “Melchizedek” means “King of Righteousness” and his royal title, the King of Salem, means “King of Peace.”  We are told that Melchizedek was not simply a king, but also a priest of “God Most High.”  In addition, when Melchizedek met Abram, he made an offering of bread and wine.  These small details are important “whispers” that God has given. And through those whispers, we can understand the significance of this unique priest-king.

At His last supper with His disciples, Jesus symbolized His redemptive work in which He would soon offer Himself as payment for man’s sin debt.  He did this by offering his disciples bread and wine. He told them that the bread was a symbol of His body, broken for man, and the wine a symbol of His blood, poured out for man.  Melchizedek offering of bread and wine to Abram prefigured that of Jesus’ offering of the same to His disciples — both clearly symbolizing a blood atonement for payement of man’s sins.

Melchizedek in the Book of Psalms

Melchizedek in the Book of Hebrews

The only other mention of Melchizedek comes another 1000 years later by the writer of the Book of Hebrews.

Hebrews was written about 20-25 years after Jesus died on the cross and rose from the grave.  It was written to Jews who had come to understand and believe that Jesus was their Messiah and that they (as a people) had crucified Him.  These early Jewish Christians were expecting Christ to return in their lifetime to reign as King of the Jews. However, as time passed some began to return to traditional Jewish beliefs and practices.  Therefore, Hebrews was written to instruct them that:

Melchizedek — A Picture of Christ

Melchizedek serves as a type or foreshadowing of Jesus Christ — the King and Priest of Righteousness and Peace. Abram surely understood Melchizedek’s high standing, as demonstrated by his giving a tithe (a tenth) of all that he possessed as tribute (Gen 14:20).

Gen 14:21 to the end of the chapter returns the focus to Abram. The king of Sodom came to thank Abram for saving his city and people.   As a gesture of appreciation and awe, the King of Sodom told Abram that he could keep for himself ALL of their possessions.   But Abram refused, citing that it was the LORD, the most high God, who had won the victory. Therefore, he wanted nothing that might take any of the glory, for only God deserved it.

Moreover, Abram wisely said that he would not receive any wealth from any earthly kings so he would not be in debt to any man.  How was Abram able to make such a decision?  Perhaps, because his encounter with Melchizedek had so profoundly contrasted the King of Righteousness, a priest of the Most High God, with all earthly kings, especially the king of Sodom.  By faith, Abram’s allegiance was to his God. And Abram would not have the king of Sodom claiming that he had made him rich (Gen 14:23).  Abram’s communion with Melchizedek reminded him that his riches came from his God.

Evidently, Abram learned great lessons in Egypt very well.  And his communion with Melchizedek further strengthened his faith.  Now, having demonstrated complete faith in God, Abram gave all the glory to God.  The underlying lesson is: When Abram was in Egypt, with opportunities to trust God completely and let his faith in God be a witness to Pharaoh, he failed.  As a result, Pharaoh drove Abram out of Egypt.  But now, having seen the contrast between the King of Righteousness and the King of Sodom (a sinful place), Abram acted in faith.  And he was a tremendous witness to the kings of the earth that they might “see” the Most High God.