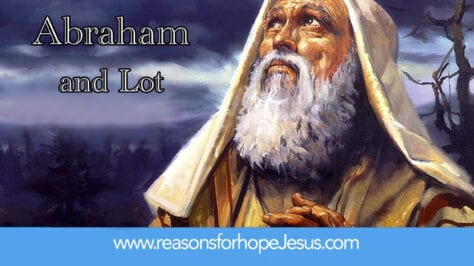 We’re looking at the life and faith of Abraham. If you missed the first two articles, you can catch up here:

Next, we’ll look at Abraham and Lot  — their relationship and their stories.

And Abram went up out of Egypt, he, and his wife, and all that he had, and Lot with him, into the south.  2 And Abram was very rich in cattle, in silver, and in gold.  3 And he went on his journeys from the south even to Bethel, unto the place where his tent had been at the beginning, between Bethel and Hai; 4 Unto the place of the altar, which he had make there at the first: and there Abram called on the name of the Lord.

These verses show that Abram learned a great lesson.  He had learned that his own reasoning and scheming were ineffective and vastly inferior to simply trusting God.  He was now back to where God wanted him. He was now trusting God and depending on Him.  In learning this lesson of faith, God brought Abram back into his good graces with many riches and rewards.

5 And Lot also, which went with Abram, had flocks, and herds, and tents.  6 And the land was not able to bear them, that they might dwell together: for their substance was great, so that they could not dwell together.  7 And there was a strife between the herdmen of Abram’s cattle and the herdmen of Lot’s cattle: and the Canaanite aand the Perizzite dwelled then in the land.  8 And Abram said unto Lot, Let there be no strife, I pray thee, between me and thee, and between my herdmen and thy herdmen; for we be brethren.  9 Is not the whole land before thee? separate thyself, I pray thee, from me: if thou wilt take the left hand, then I will go to the right; or if thou depart to the right hand, then I will go to the left.

10 And Lot lifted up his eyes, and beheld all the plain of Jordan, that it was well watered every where, before the Lord destroyed Sodom and Gomorrah, even as the garden of the Lord, like the land of Egypt, as thou comest unto Zoar.  11 Then Lot chose him all the plain of Jordan; and Lot journeyed east: and they separated themselves the one from the other.  12 Abram dwelled in the land of Canaan, and Lot dwelled in the cities of the plain, and pitched his tent toward Sodom.  13 But the men of Sodom were wicked and sinners before the Lord exceedingly.

Just as the famine had tested Abram’s faith earlier, another conflict was about to test the faith of those in his family.

This account tells that as their prosperity grew, Abram and Lot realized they needed to separate and spread out further in the land God had shown them.  Abram took a hugely generous step in allowing Lot to choose first the land he wanted.  Lot should have said, You choose Abram, and I gladly will take what is left.  But Lot greedily seized on Abram’s generosity and chose the land to the east in the valley that lay between two great cities on the plain (the cities of Sodom and Gomorrah).

Verse 13 of this passage informs us that both Lot and Abram knew that these two cities were wicked. Yet Lot was still enticed.  Lot probably thought that he could get close to these cities and take advantage of the great land between them and the trade routes that joined them.  He may have thought he could stay away from entering the cities.  But we read that the allure of these great cities proved too much for Lot and that his hasty decision and greedy choice would cost him much.

A biblical pattern is established in Genesis wherein the allure of great cities represents the seductiveness of the world.  Cities represent those things in the world that capture one’s heart and weaken one’s trust and faith in God.

And the Lord said unto Abram, after that Lot was separated from him, Lift up now thine eyes, and look from the place where thou art northward, and southward, and eastward, and westward:  15 For all the land which thou seest, to thee will I give it, and to thy seed forever.  16 And I will make thy seed as the dust of the earth: so that if a man can number the dust of the earth, then shall thy seed also be numbered.  17 Arise, walk through the land in the length of it and in the breadth of it; for I will give it unto thee.  18 Then Abram removed his tent, and came and dwelt in the plain of Mamre, which is in Hebron, and built there an altar unto the Lord.

While Lot chose poorly, Abram’s decisions pleased God.  Take note that God said Abram’s people would be as numerous as “the dust of the earth.”  This will become a  symbol that the Bible builds upon.  At this point, simply note that the chosen people (Abram’s descendants that will become the nation of Israel) will be numerous. This was one of the promises God made to Abraham. All God’s promises were literal, physical, and earthly. And all God’s promises will be fulfilled.