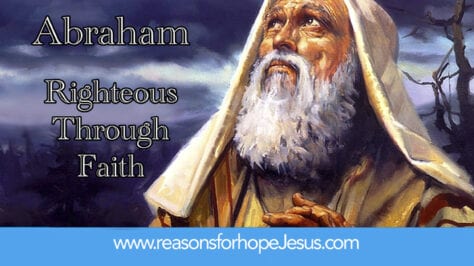 Abram was called by God to come “out of the world” and to be “separate” from the world.  God was molding Abram to be “His own” and making Abram holy (set apart) and consecrated (useful for God’s purposes).  However, it is equally critical to note that God did not do this by forced obedience.  God knew Abram’s heart and worked through his growing faith.  It was Abram’s belief in God’s purpose, and his trust in God’s direction, that was at the heart of his changing from a “man of the world” to a “man of God.”

After these things the word of the Lord came unto Abram in a vision, saying, Fear not, Abram: I am thy shield, and thy exceeding great reward.  2 And Abram said, Lord God, what wilt thou give me, seeing I go childless, and the steward of my house is this Eliezer of Damascus?  3 Behold, to me thou hast given no seed: and, lo, one born in my house is mine heir. 4 And, behold, the word of the Lord came unto him, saying, This shall not be thine heir; but he that shall come forth out of thine own bowels shall be thine heir.  5 And the LORD brought Abram forth abroad, and said, Look now toward heaven, and tell the stars, if thou be able to number them: and he said unto him, So shall thy seed be.

6 And Abram believed the Lord; and He counted it to him for righteousness.

These first six verses of Chapter 15 are among the most important in the Bible.  Before we explore why they are so important, let’s make sure we understand what was happening.

After Abram’s victory over the four kings, his recognition that God gave him the victory, and after his encounter with the priest of the Most High God (Melchizedek), God came to Abram in a dream.  God reassured Abram that He would be his protector, his shield (Gen 15:1), his great blessing, and his exceedingly great reward (Gen 15:1).

Abram knew that God had promised he would be the father of a great nation and that his descendants would be numerous (Gen 13:6).  Without having fathered any children, Abram now expressed confusion and asked how this would come to pass.  Abram pointed out that if he were to die, the heir of all his possessions would be his servant Eliezer.  But God answered Abram with an affirmation of His promise. The LORD said,

Gen 15:4-5  “This one [Eliezer] shall not be your heir, but one who will come from your own body shall be your heir.” Then He brought him outside and said, “Look now toward heaven, and count the stars if you are able to number them.” And He said to him, “So shall your descendants be.”

Abram looked at the stars, knowing they were created and set in place by the Most High God, and “he believed in the LORD” (Gen 15:6a).  And then, the LORD “counted it [Abram’s belied] to him for righteousness.” (Gen 15:6b)

For 2000 years, the promised descendants of Abraham (the Jews) have clung to the mistaken belief that their good works (religious practices and good deeds) would allow them to be judged as righteous.  But good works has never, and will never, save anyone.   God desires us to believe in Him and to believe Him (believe His words).  Abram was not declared righteous based on his works.  From the LORD’s words to Samuel, we know that it is not the works, but rather the heart that God judges.

Abram demonstrated the condition of his heart and his devotion to God.

It was Abram’s belief, trust, and devotion that God honored when He declared Abram to be righteous.

Only God can save a sinner and declare him justified (righteous).  Under the covenantal promises of the Old Covenant, people were declared righteous (saved) by God’s grace, through their faith in God.   In Christ, God fully unveiled His grace to sinful man.  And in the Church Age salvation is “by grace alone through faith” (Eph 2:8).

The Apostle Paul clearly taught salvation in his letters to the first-century churches — giving as an example the faith of Abraham.

Gal 3:6-9  Even as Abraham believed God, and it was accounted to him for righteousness. Know ye therefore that they which are of faith, the same are the children of Abraham. And the scripture, foreseeing that God would justify the heathen through faith, preached before the gospel unto Abraham, saying, In thee shall all nations be blessed. So then they which be of faith are blessed with faithful Abraham.

Rom 4:20-24  He [Abraham] staggered not at the promise of God through unbelief; but was strong in faith, giving glory to God; And being fully persuaded that, what he had promised, he was able also to perform.  And therefore it was imputed to him for righteousness.    Now it was not written for his sake alone, that it was imputed to him; But for us also, to whom it shall be imputed, if we believe on him that raised up Jesus our Lord from the dead.