What Are The Two Manuscript Lines From Which We Get Our New Testament? 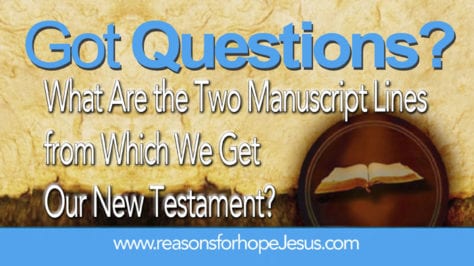 In 200 AD, an early church father named Tertullian wrote that the churches in Corinth, Ephesus, Phillipi, Thessalonica, and Rome still had original documents written by Paul and other disciples. At that time, many of the documents would have been more than 130 years old. That’s an indication of the importance the early church put upon preserving the writings of Paul and the disciples. However, they also knew that none of the documents would last forever. Therefore, they made copies, carefully copying every word from the originals, and distributing the copies among the churches.  The copies were also carefully preserved, being placed in book chests.

{Check out the Manuscript Lines Chart below. Downloadable to print.]

Along with the written copies of the original texts, there was also an oral tradition that accompanied them to ascribe the dates of the writing and the writer’s authority.  Today we have well over 5,000 Greek manuscript documents (or portions of the ancient documents). The earliest documents being circa 100 AD when some eyewitnesses of Jesus’ life, death, burial, and resurrection were still alive.

The copyists of the original manuscripts were dedicated and meticulous in their work.  We can be certain the Word of God is preserved because, first and foremost, God promised His Word would be preserved forever.

Origins of the Manuscripts

The original Bible manuscripts came from two different sources.  One line is called the Antioch Line, having originated with the documents from Antioch, Syria.  The other line originated in Alexandria, Egypt, and is called the Alexandrian Line.  There are significant differences between the two lines, but no disagreement in the messages.  Different doesn’t necessarily mean wrong. However, the differences have caused people over the centuries to question which manuscript line is best, or at least which is more accurately copied from the original documents.

The translations of the Bible that we have today are easily traceable to one of the two lines of manuscripts. From the Antioch manuscripts, we have the following English translations (not an all-inclusive list):

From the Alexandrian manuscripts, we have the following English translations (not an all-inclusive list):

This simple chart will help you see the transmission of the New Testament from the first century until today. 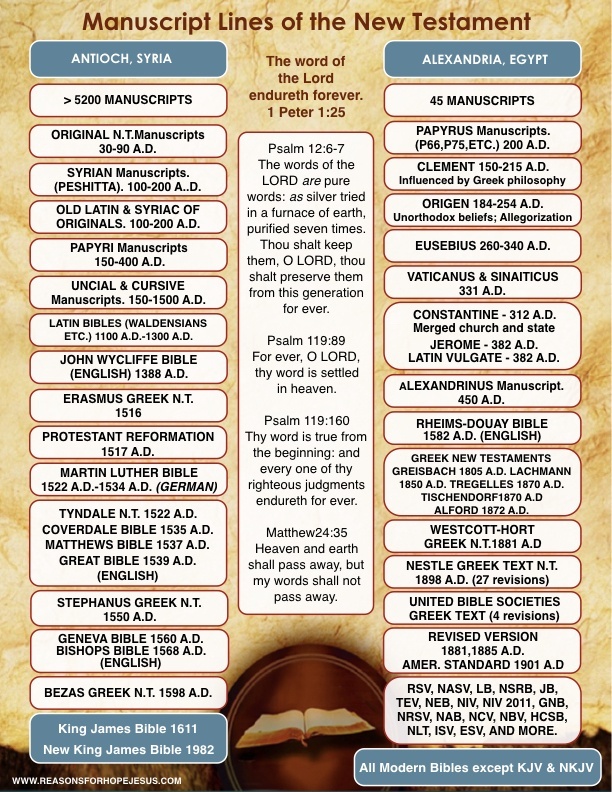 Reading and Studying the Bible

It’s also important to understand the differences between word-for-word, literal translations and dynamic, thought-by though translations.  For more about this, read Which Bible Translation is Best?