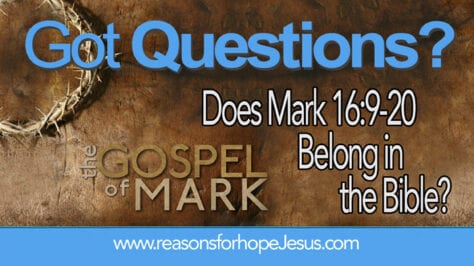 A friend recently asked me why different Bible versions have different endings for the last part of Mark 16.  Should the chapter end at verse 8? Or should verses 9-20 be included?  I couldn’t give an answer that satisfied either myself or my friend. Can you help?

This is an interesting topic, and it’s one of great debate.  In varying translations, there are different endings for the book of Mark.   They include:

Scholars have debated this issue for centuries. Let’s take a look at what is known, but before doing any research into the origins and trustworthiness of the Bible, always begin by  remembering that God promised to preserve His Word and He is faithful to do so:

Matthew 24:35  Heaven and earth shall pass away, but my words shall not pass away.

It’s important to note that the variations are seen in relation to differences in manuscript evidence. There are two lines of Bible manuscripts. One originated in Antioch, Syria and is commonly referred to as the Antioch line.  The other is referred to as the Alexandrian line, because it originated in Alexandria, Egypt.  All modern translations derive from one of these two lines of manuscripts.

All translations based on the Alexandrian line of manuscripts will have some form of exception to the Mark 16:9-20 passage (e.g. omission of the passage, insertion of additional information, or disclaimer).  The only Bibles that include Mark 16:9-20 with no exceptions added are the King James Bible (KJV) and the New King James Version (NKJV), both of which come from the Antioch line of manuscripts.

Again, the differences come from the manuscript lines. Mark 16:9-20 is not found in the Vaticanus and Sinaiticus (the oldest manuscripts, which are from the Alexandrian line). That explains why modern translations (from the Alexandrian line, with the exception of NKJV) will always include exceptions. Mark 16:9-20 is found in the extensive number of manuscripts that originated in Antioch. That explains why both the KJV and the NKJV include the verses without any exceptions.

The Message of the text of Mark 16

Those who hold to the inclusion of Mark 16:9-20, without any exception, will claim that the omission of the passage leaves the book of Mark ending in fear.  Without those last 12 verses, the book ends with Mark 16:8, which reads:

Mark 16:8  And they went out quickly, and fled from the sepulchre; for they trembled and were amazed: neither said they any thing to any man; for they were afraid.

If Mark 16:9-20 is omitted, there is no account of the resurrection recorded in Mark’s gospel.  This would make it inconsistent with the other gospel accounts of Jesus’ life, death, burial…and His resurrection.  This should cause us to wonder why the gospel accounts, especially the synoptic Gospels (Matthew, Mark, and Luke) would be alike on all historical events, but the Book of Mark would leave out the most important of events.

1) Is this an issue about the oldest manuscripts of God’s Word (only two: Vaticanus and Sinaiticus) being the most accurate? The Alexandrian line does have the two oldest manuscripts, but there are only 45 manuscripts in that line.
2) Or, is it more important that there be an extensive number of manuscripts that confirm the accuracy of the Word?  In the Antioch line, there are more than 5,200 manuscripts.
3) Can this issue be settled based on the content of the passage?  Verses 9-20 include the resurrection and parallel the other gospel accounts.
4) Could there be a reason why it ended without the account of the resurrection?

I repeat, scholars have debated this issue for centuries. There is no absolute answer for this.  Therefore, I will share my opinion.

I believe that the Gospel of Mark would have included the entire passage of Mark 16:9-20.  It seems far more plausible that Mark would have ended his writing as did the other Gospel writers, sharing the resurrection account and Jesus encouraging and empowering His disciples to go forth and serve.  This is clearly recorded in verses 19 and 20.

Mark 16:19-20 So then after the Lord had spoken unto them, he was received up into heaven, and sat on the right hand of God. And they went forth, and preached everywhere, the Lord working with them, and confirming the word with signs following. Amen.

What a glorious ending to a gospel account and a beautiful beginning to the disciples’ lives of service to Jesus.

I also do not believe that older manuscripts hold greater authority.  Perhaps they are older and still remain because they were not well accepted, or were not often read. A Bible that is read frequently will show signs of wear and those that are well-studied might even be falling apart.  A Bible that is seldom used will remain intact and can last for centuries.

Perhaps the Antioch line does not have the oldest because the manuscripts were so frequently read they did not last. However, that may account for so many preserved manuscripts from the Antioch line.  Perhaps they were more frequently copied.  As the old manuscripts deteriorated, copies would take their place.  This does, however, raise the question of the accuracy of these copies. Suffice it to say, throughout the centuries the Bible has been meticulously and accurately copied. We can trust we have an accurate Bible.  Why?  Because God promised He would preserve His Word:

Matthew 24:35  Heaven and earth shall pass away, but my words shall not pass away.

Psalm 12:6-7  The words of the LORD are pure words: as silver tried in a furnace of earth, purified seven times.  Thou shalt keep them, O LORD, thou shalt preserve them from this generation forever.

The sheer number of Antioch-line manuscripts provides ample support that Mark 16:9-20 does belong in Mark’s gospel.  So also, the message being consistent with the other gospels lends support to it having been there in Mark’s writings.  And, it ends the account with hope and purpose, as God ordains for us.

There is much more to consider on this topic.  I encourage you to do further study and to come to your own conclusions.  Whatever you decide, and whichever translation you prefer, remember that it is the Holy Spirit who teaches us.  If God can speak through a donkey (and He did in Numbers 22), then the Holy Spirit can certainly speak through any translation of God’s Word.

Since no one can go back in time and evaluate the original documents, perhaps this is one of those cases in which we should simply echo the words of the prophets Jeremiah (15:15) and Ezekiel (37:3) who said:

Addendum:  A regular reader shared another reason supporting that the older manuscripts (Alexandrian text) are not necessarily more accurate.  He wrote: “The Alexandrian manuscripts which are older were discovered much later.  It’s hard to believe that a sovereign God, who promised to preserve His word, would allow the “best” manuscripts to be delayed and discovered in the late 1800’s or early 1900’s.  That would mean for hundreds of years the world would be using inferior manuscripts with unreliable information.  It is inconceivable that our Omniscient God would withhold the best of divine inspiration from all those who lived from the time of the apostles until the 20th century.” 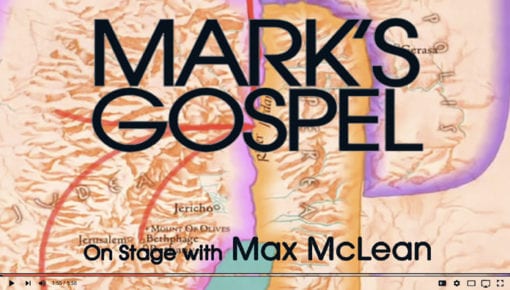