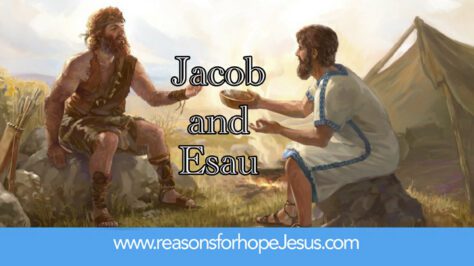 A study of the life and faith of Abraham wouldn’t be complete if we didn’t include his grandsons, Jacob and Esau.  We’ve already covered  Isaac and his surrender to his father’s will, and how Abraham sent his servant to get a bride for Isaac.  We also looked at how Isaac prefigures another promised Son–Jesus.

From the call of Abraham, God meticulously and jealously guarded the line of descendants that would lead to the Nation of Israel and ultimately to King Jesus.  Because God is true and faithful, all that He promises is certain to come to pass — in His perfect timing and for His glory and man’s good.

23 And the LORD said unto her, Two nations are in thy womb, and two manner of people shall be separated from thy bowels; and the one people shall be stronger than the other people, and the elder shall serve the younger.

God was once again showing that He was sovereign.  All matters that related to His promises would be accomplished according to His will.  According to custom, the firstborn son was to be the favored son.  But of Isaac and Rebekah’s sons, God declared it to be the younger son and He told Rebekah the older would serve the younger.

24 And when her days to be delivered were fulfilled, behold, there were twins in her womb.  25 And the first came out red, all over like a hairy garment; and they called his name Esau.  26 And after that came his brother out, and his hand took hold on Esau’s heel; and his name was called Jacob: and Isaac was threescore years old when she bare them.

27 And the boys grew: and Esau was a cunning hunter, a man of the field; and Jacob was a plain man, dwelling in tents.  28 And Isaac loved Esau, because he did eat of his venison: but Rebekah loved Jacob.

Esau was born first and thereby the birthright was his, as well as the double inheritance of the firstborn.  In ancient times, family succession was through the firstborn son and was comprised of two things:

1. The Birthright:  Leadership of the family, including responsibilities and authority, for leading the family to live in covenantal relationship with God.

2. The Inheritance: Possession of all worldly things, i.e. property and assets.

Esau esteemed his birthright of little value (Gen 25:32), and so he sold his birthright to Jacob for a bowl of stew (Gen 29-34). In doing so, the birthright passed from Esau, the firstborn son of Isaac and Rebekah, to Jacob, the second-born son.

The inheritance will also pass to Jacob. At Isaac’s death, he will unknowingly bless Jacob instead of Esau.  We’ll see how that played out in Genesis 27, but first, let’s look at the significance of the second-born.

Jacob’s name means “supplanter” or “trickster” and we read of Jacob doing that when he cooked a stew with the intention of using it to gain his brother’s birthright.

29 And Jacob sod pottage: and Esau came from the field, and he was faint:  30 And Esau said to Jacob, Feed me, I pray thee, with that same red pottage; for I am faint: therefore was his name called Edom.  31 And Jacob said, Sell me this day thy birthright.

32 And Esau said, Behold, I am at the point to die: and what profit shall this birthright do to me?  33 And Jacob said, Swear to me this day; and he sware unto him: and he sold his birthright unto Jacob.  34 Then Jacob gave Esau bread and pottage of lentiles; and he did eat and drink, and rose up, and went his way: thus Esau despised his birthright.

Rather than meet his brother’s need of hunger, Jacob gave what he had (the stew) to gain what he wanted (the birthright).  It’s true that the birthright meant little to Esau as he considered himself near death (Gen 25:32), but Jacob took advantage of his brother in his weakened state.  What little love Jacob had for his brother and what selfish desire controlled his heart.

As Christians, with the revealed word of God, we know that “we who are strong ought to bear the infirmities of the weak…” (Rom 15:1) and we are to love one another to fulfill the royal law (James 2:8).

We see a lesson in Jacob, here in chapter 25. Jacob should have given his brother the stew, rather than using it to “buy” his brother’s birthright. And in chapter 27, we’ll see another lesson. Jacob and Rebekah manipulate Isaac’s blessing.  We understand that both of these actions were sins, but we also know that God forgave them.

Some have suggested Jacob was doing God’s work in obtaining the birthright and the blessing of the firstborn because he was the one chosen of God.  However, God never condones serving Him in sinful ways and both were by trickery and manipulation.  Jacob and Rebekah were not trusting God to work things out.  They did exactly what Sarah did in offering Hagar to bear Abraham’s child.  These are examples of, “let’s help God make this happen.”

The lesson for us is rather than taking matters into our own hands and working through sinful actions, we should wait on the Lord.  God will bring about His promises, in His way and in His time.

The Pattern of the Second-Born

The Second-born Receives the Blessing and the Promis

The Pattern Fulfilled in Jesus

God’s pattern of the second-born being son of the promise was revealed by Paul in speaking about Adam and Jesus. Adam was a symbol the firstborn of man (which led to sin and rejection of God) and Jesus (the God-Man) came afterward.  He was, is, and always will be the promised Son of God, born of the Spirit.

This pattern is also seen in the Nation of Israel.  She was the “firstborn” of nations to know the True and Living God, but when His Son was presented to Israel as King, Israel rejected Him and the nation fell apart and was scattered into the world as a “lost people.”

But in 1948, God regathered Israel into their homeland and began, again, to prepare her to receive her king. The presentation of Israel’s Promised King is yet future.  But Israel, in affliction, will recognize Jesus.   Believing Isarael will finally become the PEOPLE, and the NATION, born of the PROMISE when they receive their PROMISED KING and HIS KINGDOM — all in God’s perfect time.