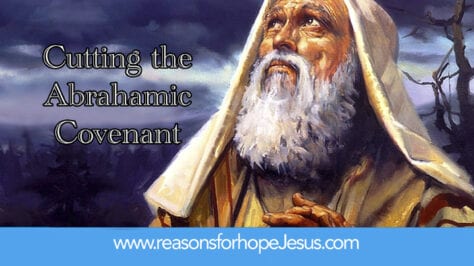 While Abram’s faith in God was deemed sufficient by God, his faith was yet still “young” and still in need of growth and maturation.  This highlights that our salvation (redemption) is an event in God’s hands alone. But our sanctification (our growth, refinement) is an ongoing process in which we participate.  Specifically, at this stage in Abram’s journey, Scripture tells that even though Abram believed God’s WORD (i.e., that he would be the father of a great, chosen people), he was still confused about how this would happen because he and Sarai were without a son and beyond child-bearing age.  They began to rationalize that they should do something to bring about God’s promise of a great people and nation.  It is godly to stand on faith, but it is oh-so-human to reason that “God helps those who help themselves.”

In the second half of Chapter 15 and in Chapter 16 two important things happen.

But first, God reaffirmed the promises He made to Abram when He called him from Ur of the Chaldees (Gen12:1-3) and cut a covenant that established those promises.

And the LORD said unto Abram, I am the Lord that brought thee out of Ur of the Chaldees, to give thee this land to inherit it. 8 And Abram said, Lord God, whereby shall I know that I shall inherit it?

In this short passage, we read of God verbally reassuring Abram that He will fulfill His promises.  Abram then asked for assurance of their agreement.  That assurance would be God’s covenant with him.

The ancient way of establishing a covenant was to “cut a covenant.”  The Hebrew word for “covenant” is  “berîyth” and it derives from a root that means “to cut.”   Ancient covenants were established by the cutting, dividing, of animals into two parts. The contracting parties would then pass between the animal parts.  This was to signify their promise to keep the covenant and that their desire was not to be killed/cut apart by failing to do so.

God gave His instructions for His covenant with Abram:

And the LORD said unto Abram, Know of a surety that thy seed shall be a stranger in a land that is not theirs, and shall serve them; and they shall afflict them four hundred years; 14 And also that nation, whom they shall serve, will I judge: and afterward shall they come out with great substance. 15 And thou shalt go to thy fathers in peace; thou shalt be buried in a good old age. 16 But in the fourth generation they shall come hither again: for the iniquity of the Amorites is not yet full.

17 And it came to pass, that, when the sun went down, and it was dark, behold a smoking furnace, and a burning lamp that passed between those pieces. 18 In the same day the Lord made a covenant with Abram, saying, Unto thy seed have I given this land, from the river of Egypt unto the great river, the river Euphrates.

God instructed Abram to kill a heifer, a goat, and a ram and cut the animals in two.  The birds were not to be divided.  But instead of both God and Abram passing between the animals, God put Abram into a deep sleep (Gen 15:12) so God alone passed between the animals.  This established the Abrahamic Covenant as an unconditional covenant, one that is unable to be broken.

It was clearly God’s purpose and plan to make unconditional promises to Abram and his descendants and to establish those promises in a way that Abram would know for certain (Gen 15:13) that the promises would come to pass.   While Abram cut the animals,  it was God alone who established the covenant.  This covenant was sealed with the blood of sacrifice making it certain and secure.  So also, we should reflect on the New Covenant. Having been sealed with the blood of sacrifice for forgiven sins, being established in the darkness by God alone, we are assured that all the covenantal promises are certain and secure.  Read our article and review our chart that compares the Abrahamic Covenant with the New Covenant:

In establishing this covenant, Abram sacrificed the animals, divide them, and laid the pieces on the ground as God instructed.  Then “a smoking furnace, and a burning lamp … passed between those pieces” (Gen 15:17).  T

The smoking furnace and burning lamp would come to be prominent symbols in the history of Abram’s descendants.  There are many varying definitions of what these two items symbolize.  While the varying definitions serve to teach spiritual truths, we believe the best meaning of these symbols are:

In his deep sleep, Abram saw a symbol of Israel and its suffering, and God in His light and glory, passed between the animals of sacrifice.  Thereby, God cut the covenant alone.  In doing so, God swore fidelity to His people, Israel, and to His promises. God took upon Himself alone the obligation of fulfilling the covenant.

These symbols also have significance in the life of a Christian.  When we are “in the world,” affliction is like a smoking furnace. And Jesus is like a Burning Lamp– a Light unto our path.  Jesus is always with us and will draw us to His Light.  What we must do is that which Abram Did.  Abram believed God and trusted that God was with Him!!!  We are to be looking unto Jesus in faith, for He is both the author and finisher of our faith (Heb 12:2).  He is our Light and He is faithful to bring all of His promises to pass.

In establishing this covenant, God gave further information about that which He had promised.  Previously, He had promised “a land,” but now God defined the boundaries of that land:  “…from the river of Egypt unto the great river, the river Euphrates” (Gen 15:18).   This promise has not yet been fulfilled. But this promise will be fulfilled when Christ returns. Israel will be given all the land that God gave in His covenantal promises to Abram. And in that land, Israel will live as the lead nation with Jesus as the King.

Faith is needed for God’s GRACE to be poured out in our salvation.  “By grace you have been saved through faith, and that not of yourselves; it is the gift of God, not of works, lest anyone should boast.” (Eph 2:8-9)

So also, our faith is to be a living faith. We received the righteousness of Christ (Read: The Gift of Salvation: Justification & Imputation) the moment we truly believed who He is and what He has done for us.  But we are called to continue to grow and develop in that faith the rest of our lives.  And when we do, we will do increasingly great things (works and witness) trusting the Lord and allowing His Holy Spirit to work in and through us.