The Case for Christ: Movie Review 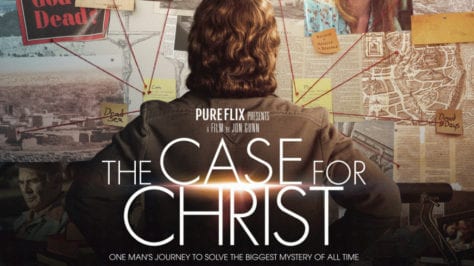 While God certainly draws people to Himself via apologetic arguments and evidences, He certainly has many more resources in His arsenal than that. This truth is illustrated beautifully in the recently released movie The Case for Christ. The movie is set in Chicago in 1980 and tells the story of the conversion to Christianity of the well-known Christian author Lee Strobel (played by Mike Vogel) and his wife Leslie (played by Erika Christensen). Neither Lee nor Leslie were Christians when they married. Lee was having much success in his career as a legal editor for the Chicago Tribune, and both he and his wife were quite happy in their lives as unbelievers. But when God used a chain of events—that did not involve apologetic arguments and evidences—to stir Leslie to the conviction that Christianity is true, Lee was forced to come face to face with the truth claims of Christianity for the first time and reexamine his atheism.

The movie captures in a powerful way the intense spiritual struggle that is often involved in coming to Christ, and it wonderfully depicts how the Holy Spirit works in a multitude of ways to break down the barriers of sin in unbelieving hearts to prepare people to accept the gospel. While Leslie encountered God in a more emotional way through events and Christian friends that God providentially placed into her life, Lee’s conversion illustrates how God can use a combination of arguments, evidences, and personal experiences to soften the heart of even a highly skeptical atheist. Leslie’s conversion and newfound passionate love for God sent Lee on a personal mission to use all of his investigative skills as a reporter to gather the evidence needed to convince his wife that she was caught up in what he considered to be a “cult” that is not rooted in facts. But this journey did not unfold as Lee planned. Lee interviewed experts in such fields as theology, philosophy, psychology, and medicine; however, what he discovered did not allow him to rest easy in the confident unbelief that he had always maintained.

The movie is gripping and entertaining from start to finish. Unlike many Christian movies that leave the viewer cringing, the story is put together well and features quality acting. The film does not force apologetics into the story; rather, solid apologetic evidence for the resurrection of Jesus is sprinkled into the story in a natural way as Lee travels down his road to faith in Christ. While the evidence for the resurrection of Jesus is crucial to Lee’s conversion, the Holy Spirit brings him to faith via a multi-pronged plan that includes events that Lee experienced at work and within his family. There are a number of emotional scenes in which the personal spiritual battle that Lee is facing is palpable and moving, and the movie does well to illustrate how coming to faith is not merely a matter of coldly weighing out the evidence. Moreover, the turmoil that Leslie faces as Lee remains committed to his unbelief will resonate with many who have come to faith in Christ but feel the stress of not being able to convince loved ones to do the same. Indeed, the loving and patient way that she responds to this turmoil and balances her love for Christ and her love for Lee is one of the most instructive aspects of the film.

Ultimately, this film has much to offer for both believers in Christ and unbelievers. For believers, it reveals what a powerful tool apologetic evidence can be and how the Spirit makes use of it to impact certain unbelievers and draw them to the truth. It also reveals the importance of Christians loving unbelievers unconditionally and being a living testimony to them. In this way, it reminds those Christians who tend to think of evangelism as a matter of purely logic chopping and apologetic evidence that unbelief is never merely about evidence—it involves the heart and moral and emotional dimensions as well. At the same time, it reminds those who think of evangelism as a matter of simply “loving people to Jesus” without answering their hard evidential questions that this approach is inadequate for some unbelievers; some people need to have their intellectual questions answered before they will come to Christ. The film highlights how God is sovereign and is constantly working in providential ways to help unbelievers realize the truth of the gospel, and people can legitimately come to faith through evidential and non-evidential means. For unbelievers who see the film, it will introduce to them highlights of some of the best historical evidence for the resurrection of Jesus and will expose them to the names of leading scholars in Christian apologetics—people like William Lane Craig and Gary Habermas. The movie also is sympathetic and fair to the unbelievers who are portrayed in it and does not demonize them—a criticism that can rightly be made of the 2014 Christian film God’s Not Dead, for example. Unbelieving viewers should also be able to appreciate the movie as a well-told and well-acted tale of two people who faced wrenching turmoil in their lives and in their marriage. From a plot standpoint, the movie holds its own and is engaging even apart from the fact that the story centers around religious aspects, though an unbeliever may not find it to be as much of a feel-good story as a believer would. While the love story between Lee and Leslie can be appreciated by any viewer, hopefully, the love that God has for humanity shines through to the unbeliever as well through this film. In the final analysis, this reviewer highly recommends the film.

Movie Review by By Zach Breitenbach, www.moralapologetics.com, reposted with permission.