ISAAC: A Whisper of Jesus in Genesis 22 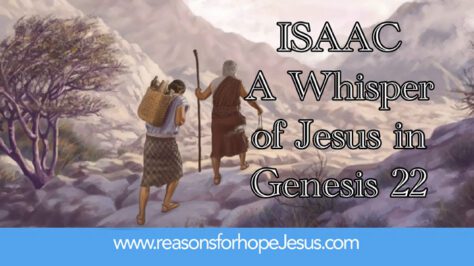 We’ve studied Genesis 22. And in typology, the events of that chapter give a picture of the cross.  We see the father, who loves his only son. He is willing to lay his son on the altar and sacrifice him as a burnt offering — an offering for the atonement of sin. (Read: The Akedah: God’s Testing of Abraham’s Faith and Obedience)

The Jews call this event “the binding of Isaac” Isaac was bound and laid on the altar. But God intervened and Isaac was spared. However, almost 2,000 years later, God would put His only Son on the altar and the sacrifice would be finished.

Isaac As a Type of Christ

The binding of Isaac has a great deal of typology that points to the sacrifice of Jesus.   Isaac is one of the clearest types of Christ in the Bible. His person and his life whisper of the true and better Son of the Father who would pay the ultimate price for the sins of the world.

Typology of Isaac that Points to Jesus

*Both were promised sons.

*Both were only sons of their fathers.

*Both had a miraculous conception and birth.

Gen 18:10  And God said…Sarah thy wife shall have a son.
Luke 1:3031  And the angel said unto her, Fear not, Mary…thou shalt conceive in thy womb, and bring forth a son, and shalt call his name JESUS.

*Both had a three-day experience.

Isaac journeyed three days to Mt. Moriah. And Jesus spent three days in the heart of the earth.

*Both were accompanied by two men.

Isaac was accompanied by two servants (Gen 22:3). And Jesus was crucified between two thieves (Matt 27:38)

*Both carried their own wood.

Isaac carried the wood for the burnt offering (Gen 22:6).  And Jesus carried the crossbeam of his cross (John 19:17).

*Both were surrendered to the will of their father.

*Both asked their father a question.

The parallels are many and the whisper is really more of a shout.  The life of Isaac points to Jesus, our Glorious Saviour.