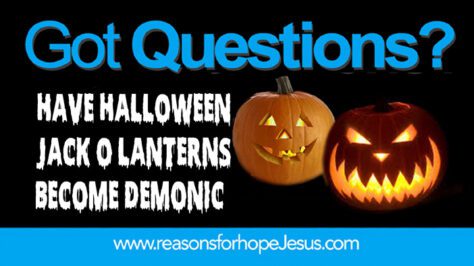 Jack-o’-lanterns have certainly evolved over the years.  In the past, most Jack-o’-lanterns were carved with toothy smiles and simple triangle eyes and noses.  The Jack-o’-lanterns served to welcome Halloween trick-or-treaters with their illuminated bright eyes and cheerful smiles.  But times have changed significantly.

Halloween has gone from a single day and night celebration to a whole month’s display of decorations and numerous party days. Coffins, skeletons, ghosts, black cats, and more, decorate lawns. Orange lights and spider webs adorn trees and bushes.  And there are many Halloween costume parties — for both children and adults.

Halloween is no longer simply a few nighttime hours of children’s playful trick-or-treating.

It’s well known that Halloween has a spiritual origin, albeit a dark one.  The tradition originates from the ancient festival of Samhain. Samhain was a festival of fhe Celts who lived 2,000 years ago, in the area that now covers Ireland, the United Kingdom, and northern France.

Celtic people believed that on the eve of the new year, October 31st, the realm of the dead was opened and ghosts arose to walk the earth.  Therefore, on the new year’s eve, the Celts wore costumes of animal heads and skins and burned sacrifices (both crops & animals) to their deities, hoping to appease the deities and ward off evil spirits.

By 43 A.D. the Celtic territory was conquered by Rome. Soon after Roman beliefs and festivals were merged into the October 31st celebration of Samhain.

In 609 A.D, Pope Boniface IV established the Catholic feast of All Martyrs Day on May 13th;. Pope Gregory III (early 8th century) expanded the festival to include all church ordained saints and moved the observance to November 1st.  Later, around 1000 A.D. the church honored all the dead by designating November 2nd as All Souls’ Day. (read more about Oct 31st, Nov 1st & 2nd)

The Middle English name for All Saints’ Day was Alholowmesse, so the celebration was called All-hallows or All-hallowmas. And the night before All Hallows, which was also the traditional night of the Celtic Samhain, became known as All-Hallows Eve and, eventually in the secular world, Halloween.

Why Carved Pumpkins for Jack-o-lanterns?

The ages-old legend about jack-o’-lanterns doesn’t include a pumpkin. It’s about a man and a turnip.

The legend tells of an Irish man named Stingy Jack. He tricked the Devil into promising not to take his soul at his death.   When Stingy Jack died, he went to Heaven. But he was not allowed into Heaven because of all the bad things he had done during his lifetime.  Stingy Jack was then sent to the Devil, who could not let him into Hell because he had promised not to take his soul.  Without admittance into Heaven or Hell, Jack was sentenced to wander in darkness for all eternity. Knowing this, the Devil gave Stingy Jack an ember  to light his way in the darkness.  Stingy Jack hollowed out a turnip to serve as a lantern to carry the ember as he wandered.

Now, don’t throw out your jack-o’-lanterns. This is simply a folk-lore legend.  Clearly, it’s not true. And certainly, it’s not biblical.

We can easily see the problems with this legend:

The only sound doctrine is that Stingy Jack’s bad deeds on earth kept him out of Heaven. The Bible tells that every human, in their lifetime, has a long list of bad deeds (we call them sins).  Only if one repents and trusts in Christ are those sins forgiven and washed away. And only then can one receive the righteousness of Christ, making one worthy to enter Heaven.  Without having his bad deeds forgiven, it’s accurate to say that Stingy Jack could not be admitted into Heaven.

The tradition of carving turnips to be used for lanterns was brought, to America by Irish and Scottish immigrants. Americans began carving pumpkins for lanterns during a time of a shortage of turnips. Around 1820, carving pumpkins grew in popularity because of the Headless Horseman character in Washington Irving’s  “The Legend of Sleepy Hollow.” He had a carved pumpkin for his head.  The earliest record of a pumpkin jack-o’-lantern was in an 1834 newspaper.

In our time, most people have no knowledge of the history of the jack-o’-lantern, but most people have fond childhood memories of carving them.  With an upturned, toothy smile and triangle-shaped eyes and nose, and with a candle inserted, jack-o-lantern’s served as a light in the darkness on Halloween night.

In recent decades, jack-o’-lantern’s faces are more varied, and often with a sinister appearance.  Gruesome faces are created by simply turning the triangle eyes sideways, changing the grin to be a grimace, and carving other details that convey fright.  Gone is the cheerful jack-o’-lantern’s grinning smile, and in its place is an illuminated face that fits well with the scary, frightful, dark side of Halloween.

If, or how, one celebrates Halloween is a personal decision.  The Bible does not address our man-made holidays and celebrations.  But the Bible does clearly warn against any activity that might promote sinful behavior.

We are children of the Light. Therefore, on Halloween, when many celebrate darkness and death, let your light shine bright.  Maybe this year you can be bold and greet your trick-or-treaters with a “Jesus-lantern.”  A true Light in the darkness.

AND, if you are handing out candy…

Give your Trick or Treaters our Halloween Word Search.
Click here to download and print copies to include for a Scripture-sharing treat!!! 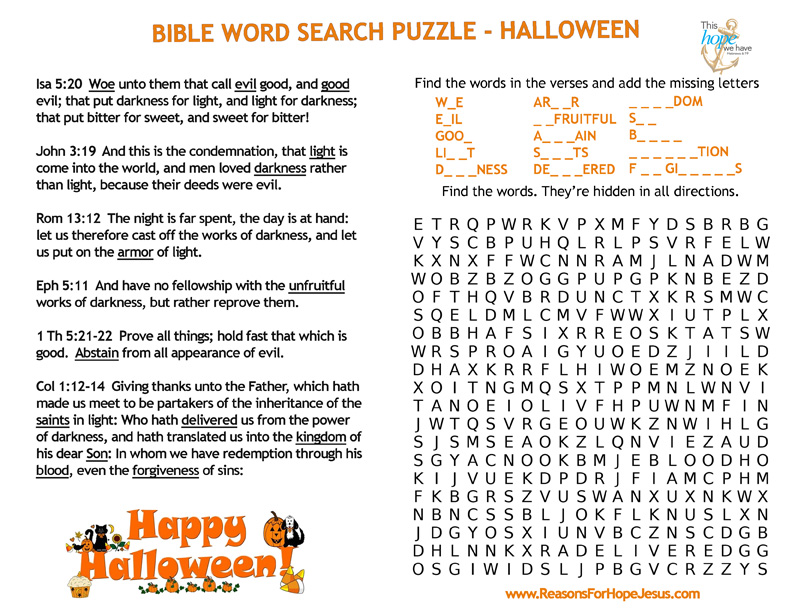