All Thanks Be To God 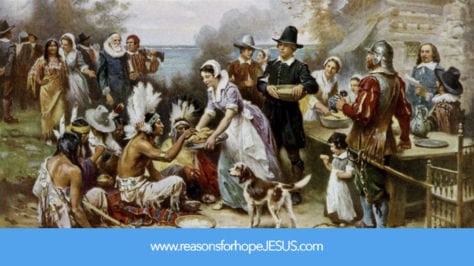 “Thanks be to God, who gives us the victory through our Lord Jesus Christ.” I Corinthians 15:57

Individuals, churches, and nations have the privilege and responsibility of giving thanks to God. Each of us should be quick to acknowledge the many ways that God’s goodness has been extended in our lives. Once we realize that God is in control of each day, a consistent attitude of praise and thanksgiving can replace feelings of doubt or insecurity.

From the Pilgrims themselves to America’s founding fathers, to godly leaders of recent times, our heritage has included recognition of our corporate dependence on God. In late November 1620, after having been at sea for over two months, the Mayflower’s 102 passengers arrived in Massachusetts. On December 11, 1620, they signed the “Mayflower Compact,” America’s first document of civil government.

The Mayflower Compact heavily influenced all subsequent founding documents. It stated that the Pilgrim’s purpose was, “the glory of God, and the advancement of the Christian faith.”

On land, shelters and rough living quarters had been quickly built. Yet by the spring half of all the Pilgrims were dead. The Pilgrims planted their fields and that summer their farming efforts yielded a bountiful crop. While the increase was given by God, the Pilgrims knew that their harvest was due in part to the assistance given by helpful Indians.

On December 13, 1621, the Pilgrims began a three-day feast to thank the Lord and to celebrate with the friendly Indians. The Pilgrims knew that their survival was due to Almighty God. The words of Pilgrim Edward Winslow give insight into the meaning of the event:

“Our harvest being gotten in, our Governor sent four men on fowling, so that we might, after a special manner, rejoice together…Many of the Indians came amongst us, and their greatest King, Massosoit, with some 90 men, who for 3 days we entertained and feasted…And although it be not always so plentiful as it was at this time with us, yet by the goodness of God, we are far from want.”

Two years after the first Thanksgiving, Governor William Bradford proclaimed November 29, 1623 to be an official day of thanks. Bradford decreed:

“I do proclaim that all ye Pilgrims, with your wives and little ones, do gather at ye meeting house, there to listen to ye pastor and render thanksgiving to ye Almighty God for His blessings…”

Our nation’s day of Thanksgiving to God was declared and passed into law more than 150 years later.

It is clear that our forefathers were a thankful people, and the object of their worship was the God of the Bible.

In 2017, we must remember that the Lord is our source of all gifts. Without Him, we have nothing and we are nothing!

Happy Thanksgiving.  All Thanks Be To God!

***Lent: 40 Titles for 40 Days (Download NOW: 40 Titles for Lenten Devotions)
What is Lent? Should I Give Up Something? (Article and Video)
This Time Called Lent (Video)
Prepare for Lent (Video)
Lent Reflections (Video)
END_OF_DOCUMENT_TOKEN_TO_BE_REPLACED (Article)
END_OF_DOCUMENT_TOKEN_TO_BE_REPLACED (Reflect and Prepare short video)
Have You Sat At The Master’s Table? (John 13-17)