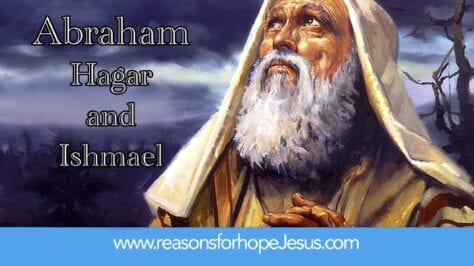 Three things to remember as we continue our study of the life of Abram:

Also remember, it was Abram’s faith that pleased God to the point of God counting his faith as righteousness (Gen 15:6).  This was a declaration of justification — a “right” and “acceptable” standing before a perfect God.  As we study chapter 16, we will see that this was just the beginning of Abram’s faith walk with God.

1  Now Sarai, Abram’s wife, bare him no children: and she had an handmaid, an Egyptian, whose name was Hagar.  2 And Sarai said unto Abram, Behold now, the Lord hath restrained me from bearing: I pray thee, go in unto my maid; it may be that I may obtain children by her. And Abram hearkened to the voice of Sarai.  3 And Sarai, Abram’s wife, took Hagar her maid the Egyptian, after Abram had dwelt ten years in the land of Canaan, and gave her to her husband Abram to be his wife.  4 And he went in unto Hagar, and she conceived…

This is truly a great lesson for all who come to God in faith.  When things do not seem to be progressing as we expect, we often tend to conclude that God is “waiting on us” to do something and then God will do His part.  In this case, Sarai “reasoned” since God promised a seed to Abram, she must be the issue.  So,  perhaps with good intentions, she decided  Abram could get his promised son through her servant Hagar, a slave she had acquired in Egypt many years before.  Abram heard Sarai’s reasoning and instead of turning to God for His direction and guidance, he “harkened to the voice of Sarai” and took Hagar as a second wife.

By trying to help God, Sarai and Abram showed they had not yet surrendered to God’s will and His timetable.  So what happened when Sarai tried to do something to “help” God?  She ended up hurt, angry, and humiliated.  She despised Hagar (Gen 16:4).

4 …and when she saw that she had conceived, her mistress was despised in her eyes.

5 And Sarai said unto Abram, My wrong be upon thee: I have given my maid into thy bosom; and when she saw that she had conceived, I was despised in her eyes: the Lord judge between me and thee.  6 But Abram said unto Sarai, Behold, thy maid is in thine hand; do to her as it pleaseth thee. And when Sarai dealt hardly with her, she fled from her face.

So Sarai drove a pregnant Hagar from their home and Hagar fled into the wilderness, attempting to return to her home in Egypt.

God’s Mercy Given to Hagar

There is no chance that Hagar would have survived her flight to Egypt.  Without God’s intervention, she would have died in the desert. But God did intervene. The Angel of the Lord came and told  Hagar to return to Abram and Sarai and to tell them all that God had told her.

10 And the angel of the Lord said unto her, I will multiply thy seed exceedingly, that it shall not be numbered for multitude.

Then the Angel explained to Hagar that she would indeed have a son.  She was to tell Abram to name that son Ishmael, which means “God hears.”

And the angel of the Lord said unto her, Behold, thou art with child and shalt bear a son, and shalt call his name Ishmael; because the Lord hath heard thy affliction.

The Angel further explained that Ishmael would be “a wild man; his hand will be against every man, and every man’s hand against him; and he shall dwell in the presence of all his brethren,”

12 And he will be a wild man; his hand will be against every man, and every man’s hand against him; and he shall dwell in the presence of all his brethren.  13 And she called the name of the Lord that spake unto her, Thou God seest me: for she said, Have I also here looked after him that seeth me?  14 Wherefore the well was called Beerlahairoi; behold, it is between Kadesh and Bered.

15 And Hagar bare Abram a son: and Abram called his son’s name, which Hagar bare, Ishmael.

Ishmael would come to be the father of the Arab people.  They would be “half-brothers” to the Jews and would dwell nearby. But they would not get along amongst themselves or with the Jew.  Ishmael’s people will always be in hostility with others and acting like “wild men.”  God said this 4,000 years ago. God’s words have been proven to be perfectly accurate.  The Arabs (descendants of Ishmael) and the Jews share Abraham as their father, they dwell in the land as neighbors, and yet the Arabs do not get along with one another or their Jewish half-brothers.

First, Hagar was an Egyptian. The gods she knew were false gods.  She did not know the God that Abram and Sarai knew.  Yet, the True God appeared to her and she understood Him to be the God above the Egyptian gods.  Having been told to name her son “God hears” (Gen 16:11),  she then declared that He is the God who sees (Gen 16:13) because He saw her plight.

Second, when Hagar returned to Abram and Sarai they accepted her back. And four years later, God appeared to Abram, identifying Himself as the Almighty God, calling Abram to be holy, and confirming His covenant with him.

Gen 17:1-2  And when Abram was ninety years old and nine, the LORD appeared to Abram, and said unto him, I am the Almighty God; walk before me, and be thou perfect.  And I will make my covenant between me and thee, and will multiply thee exceedingly.