How Should We Understand the Mind of God? 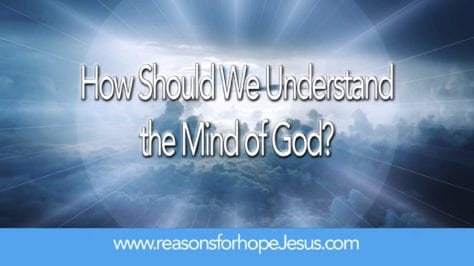 Anthropomorphisms  are figures of speech which attribute human forms, acts, and affections to God.  Obviously, being created in the image of God, we have a mind because God has a mind.   But He is the master-mind that created all things in heaven and earth, and far beyond including the universe of innumerable planets, stars, suns, and galaxies.

Pondering such a majestic, awesome God caused David to write, “When I consider Your heavens, the work of Your fingers; the moon and the stars which You have ordained, what is man that You are mindful of him” (Psalm 8:4).  The Lord spoke through the prophet (Isaiah 55:9) saying, “For as the heavens are higher than the earth, so are My ways higher than your ways, and My thoughts are higher than your thoughts.”  It is impossible to comprehend the mind of the One who created the vast and infinite universe, and yet He has in His Word revealed much to us about His mind.

The Mind of God

Remembrance in the Mind of God

God’s remembrance is complete.  The fact is, God remembers everything!  I’ve often wished I could have a better memory.  I don’t dare go to the grocery store without a written list if we need more than three things, and even then it is wise to write them down.  So what is included in God’s remembrance?

He remembered His promise to Sarah. The Lord told her she would have a son in her old age, and she miraculously conceived and gave birth to Isaac at the age of 90, scripture saying…”The Lord did for Sarah as He had spoken” (Gen. 21:1).

You who are Bible students  will recall that Jesus  told His disciples in advance that He would be persecuted, crucified, buried, and would rise again.  But the angel had to remind His bewildered followers at the empty tomb… “Do not be afraid, for I know you seek Jesus who was crucified.  He is not here, for He is risen as He said…” (Mat. 28:5-6).

Yes, God remembers  all of His promises, and He keeps them!  And that includes the promise of the second coming of Christ.  He is coming again, despite what scoffers say (see 2 Pet. 3:3-14).

Young Joseph was cruelly forsaken by his brothers and sold as a slave in Egypt, eventually ending up in prison through no fault of his own.  There in that dungeon, he was forgotten by the one man (the chief butler) who could have helped garner his freedom.  But the Lord had not forgotten Joseph, and divinely orchestrated his release from prison and incredible rise to the second-highest office in Egypt.  This enabled him to later assure his trembling brothers who expected Joseph to exact revenge…”As for you, you meant evil against me, but God meant it for good”(Gen. 50:20).

An aging apostle Paul had been forgotten and forsaken by his converts and companions, but he knew that God had not forgotten him and said…”But the Lord stood with me and strengthened me…and the Lord will deliver me from every evil work and preserve me for His heavenly kingdom”(2 Tim. 4:17-18).  How grateful we should be for the unfailing mind of God!

Forgetfulness in the Mind of God

God’s forgetfulness is Complete.  Now, this is hard for us to comprehend.  I believe the Lord doesn’t really forget, because He has perfect knowledge of all things past, present, and future.  But being Almighty God, He is able not to remember, to literally not allow into His mind that which He does not want to remember!  In other words, God “forgets” everything He wants to not think about!  Now wouldn’t that be nice?  There are some things most of us would like to forget but we can’t.  But our God is able to completely “forget” the things He does not want to remember.  Here is a blessed example.

Isn’t that wonderful?  David, who had his share of regrets, extolled the mercies of the Lord writing in Psalm 103:12, “As far as the east is from the west, so far has He removed our transgressions from us.”   We’re told in Isaiah 43:25, “I, even I am He who blots out your transgressions for My own sake; and I will not remember your sins.”

The prophet Micah said, “You will cast all our sins into the depths of the sea,” (Mic.7:1).  Many of us grew up singing in the chorus, “Gone, gone, gone, gone, yes my sins are gone! Now my soul is free and in my heart’s a song.  Buried in the deepest sea, yes, that’s good enough for me.  I shall reign eternally, Praise God, my sins are G-O-N-E-, Gone!!”  There’s also a wonderful song of  old, “His Be the Victor’s Name” by Samuel Gandy (1838), that reminds us, “My sin is cast into the sea of God’s forgotten memory; No more to haunt accusingly, for Christ has lived and died for me.”  (Watch a music video of this song).

Understanding in the Mind of God

There are many things that our finite minds cannot understand.  We do not understand when the wicked are exalted and the righteous are persecuted, or when a child dies of cancer, or a teenage girl is raped and killed, or an aspiring preacher dies young, or a murderous dictator lives a long and seemingly prosperous life.  Godly Job didn’t understand when he lost all of his livestock, possessions, and his ten children in just one day, yet he humbly bowed and worshipped the Lord.  He didn’t understand when his friends turned against him, but he valiantly held on to the God whose understanding is infinite.  Job said, “Though He slay me, yet will I trust Him” (Job 13:15).  And in Job 23:10, Job said, “He knows the way that I take; when He has tested me, I shall come forth as gold.”

The story is told of a man who was mad at God but was somehow convinced to attend church.  As the minister concluded the sermon and gave the invitation, he noticed this man was obviously disturbed.  After the service, the minister asked him if something was wrong, and offered to help.  The man responded angrily, “Where was God when my son died?”  The pastor replied, “God was right where He was when His own Son died on an old rugged cross…for you.”  At that moment, the man softened as the light of the glorious gospel shone through, and the Holy Spirit convinced him that God truly understood his grief.  In 1 Peter 5:7, the Bible tells each of us  to be continually “casting your care upon Him, for He cares for you.”

Knowledge in the Mind of God

Just think of the innumerable amount of stars in the universe.  Ps. 147:4 says, “He counts the number of the stars; He knows them all by name.”  Talk about mind-boggling!  Think of the multiplied billions of birds alive today.  Jesus said to His disciples, “Are not five sparrows sold for two copper coins?  And not one of them is forgotten by God”(Luke 12:6).  Then Christ went on to say, “But the very hairs of your head are all numbered.” Think of the kind of master-mind that can concurrently keep all of those details straight at any moment of time!

Relationship in the Mind of God

Let us not forget there is something else God knows, and that is exactly who His children are.  We’re told in 2 Tim. 2:19, “The Lord knows those who are His…”  Despite the fact that many call themselves Christians, God knows the truth!  And Jesus said the day is coming when all must stand before God and the counterfeits will be exposed.  In Mat. 7:21-13, Jesus said, “Not everyone who says to Me, ‘Lord, Lord,’ shall enter the kingdom of heaven, but he who does the will of My Father in heaven.  Many will say to Me in that day, ‘Lord, Lord, have we not prophesied in Your name, cast out demons in Your name, and done many wonders in Your name?’  And I will declare to them, ‘I never knew you; depart from Me, you who practice lawlessness’.”   (Read: Jesus said, I never knew you. Why?)