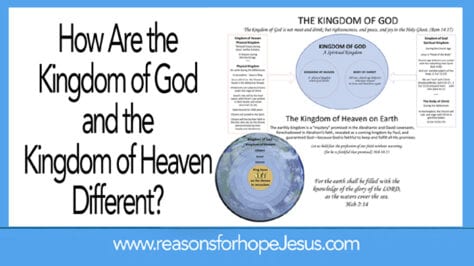 The Bible is all about Jesus and it reveals all that Jesus is!  From the first page of Genesis to the last page of Revelation, the Bible reveals our Creator, Redeemer, Sustainer, and the One who will restore all things to God’s created order, purpose, and plan.  In addition to revealing Jesus as our Lord and Saviour, our Sustainer, and our Hope, the Bible also reveals Jesus as our King.

Both are eternal Kingdoms. But they are very different in nature and in purpose. One is a spiritual kingdom and the other is a physical kingdom.

The Kingdom of God

The Kingdom of God is the rule and reign of God over all that exists.  He reigns over the heavenly realm, the earth, the universe  — over all that He created.  Everything belongs to the Lord and He is Sovereign over all.

A Psalm of David. The earth is the LORD’S, and the fulness thereof; the world, and they that dwell therein. (Psa 24:1)

The heavens are thine, the earth also is thine: as for the world and the fulness thereof, thou hast founded them. (Psa 89:11)

The LORD hath prepared his throne in the heavens; and his kingdom ruleth over all. (Psa 103:19)

The Kingdom of God is a spiritual kingdom, unseen by the human eye.  But we, as Christians, can “see” it with the “eyes of our understanding.”

Eph 1:18  The eyes of your understanding being enlightened; that ye may know what is the hope of his calling, and what the riches of the glory of his inheritance in the saints.

The Kingdom of Heaven

The Kingdom of Heaven is a literal, physical kingdom.  It can be thought of as the place where God dwells in His glory.  Since the fall in the Garden, this Kingdom has been in Heaven, specifically in the Third Heaven (Read: Three Heavens? Where is the Third Heaven?)   There God sits on the throne and rules over ALL — the spiritual and the physical kingdoms of which Christians are citizens of both.

We certainly understand our being part of the spiritual kingdom, for it is the kingdom that we entered into when we were born again.  It is a kingdom of “righteousness, and peace, and joy in the Holy Spirit” (Rom 14:17).  But we must always remember that we are also citizens of the Kingdom of Heaven.

Phil 3:20  For our citizenship is in heaven, from which we also eagerly wait for the Savior, the Lord Jesus Christ,

A United Kingdom to Come

It was God’s intent in creation to have a united kingdom (both spiritual and physical) on earth.  And it was to be inhabited by those whom He created in His image.  God walked in the Garden, with Adam and Eve when they were sinless.  They were in perfect union and full communion with God.  But when Adam sinned, that relationship was broken and the Kingdom was divided.  Yet God, in His mercy, promised a Rescuer who would restore mankind to union and communion with Himself in a spiritual kingdom. And He gave the promises of a future physical kingdom once again on this earth.

The Two Kingdoms in the Church Age

When God sent Jesus, the Promised Rescuer of Genesis 3:15, He came with Kingdom power, which is the power of the King who sits on the throne and rules over all things.  In that power, Jesus began to reveal God’s plan to restore all things to the purpose He had intended in creation.  With His birth, life, death, burial, resurrection, and ascension, Jesus opened the way for mankind to again be a part of God’s united kingdom.

The Kingdom of God in the Church Age

The Church Age is the time since the cross, during which the Holy Spirit has sealed and indwells those who have come to faith in the Lord Jesus Christ. They have been forgiven of their sins and born again into the Kingdom of God.  The Holy Spirit is the “mark” of every citizen in the Kingdom of God and we understand Him to be the “guarantee” of our salvation and of all God’s promises yet to come, including our living in the Kingdom of Heaven (the literal, physical place).

As already stated, the Kingdom of God is not seen. But it is here on earth, and it is a very real Kingdom to every born-again believer.

Our King rules over our minds and hearts. Therefore, knowing that our King is a benevolent King, it should always be our desire to surrender to His will and to obey His commands.

The Kingdom of Heaven in the Church Age

During the Church Age, this Kingdom remains in the Third Heaven, where King Jesus sits on the throne. All born-again Christians will go there, at death or by rapture.  And one day, Jesus will return to fulfill God’s plan and purpose in restoring the earth:

The Kingdom of Heaven on earth is still future. It has not yet happened.  But we know with all certainty that it will come to pass, just as God has promised in His Word.

Understanding Entrance Into the Kingdom of God

Anyone can come into this spiritual kingdom, but all who enter do so by being spiritually reborn into it (born by grace through faith, Eph 2:8). Therefore, only those who have trusted in Jesus as Lord and Savior are citizens of the Kingdom of God.  We call those citizens, the Body of Christ, the Bride of Christ, the Family of God, and the Church of God.  All of these metaphorical titles given to us by the apostle Paul so we can better understand our citizenship and the Kingdom.

Understanding Citizenship in the Kingdom of Heaven

As believers, our citizenship in the Kingdom of Heaven is already established and is secure forever.  Paul wrote to the Church at Ephesus:

Eph 2:4-7  …God, who is rich in mercy, because of His great love with which He loved us, even when we were dead in trespasses, made us alive together with Christ (by grace you have been saved), and raised us up together, and made us sit together in the heavenly places in Christ Jesus, that in the ages to come He might show the exceeding riches of His grace in His kindness toward us in Christ Jesus.

The Glory of the Kingdoms

Oh, what a glorious time it will be when Jesus rules and reigns on earth in His Kingdom.  But in the time in which we now live, as citizens of both kingdoms, we already have the riches of His glory (“strengthened…through His Spirit” Eph 3:16).

Eph 3:14-19  For this reason I bow my knees to the Father of our Lord Jesus Christ, from whom the whole family [of God] in heaven and earth is named [all in the family are citizens of the Kingdom of Heaven-a real place], that He would grant you, according to the riches of His glory, to be strengthened with might through His Spirit in the inner man, that Christ may dwell in your hearts through faith [the Kingdom of God-a spiritual kingdom];  that you, being rooted and grounded in love [the Royal Law of the King. — James 2:8, Gal 6:2], may be able to comprehend with all the saints what is the width and length and depth and height; to know the love of Christ which passes knowledge; that you may be filled with all the fullness of God. 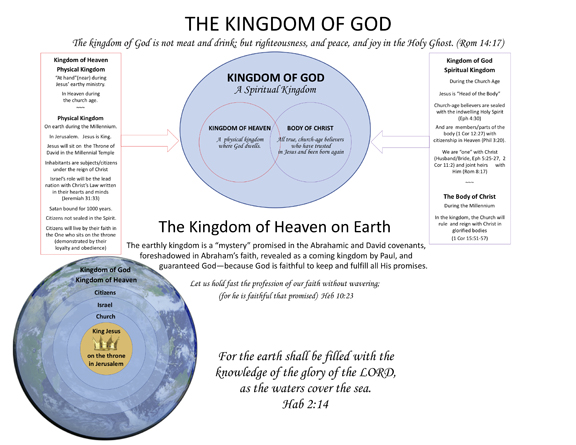